Jim is an employee in a pulp industry that is situated near a river. This industry releases their waste to the river when it reaches so levels this is done by the foremen. When the waste is realized into the river it affects many activities such as fishing. Jim is newly employed as manager in the industry, after a while he is told about the issue that affect the river and orders water to be teted and found that the water had no problem and until to his knowledge when Ralph an environmentalist notified him that he was coming to see him.

Romania secretary to Jim had knowledge on the money that is given to Ralph so that he does not report the matter to EPA who could impose fines to the firm and final shutdown. Ethical issues rise from this if Jim has to give money or not.

Ethical issue refers to a problem, opportunity or a situation in which an individual or group should make a decision within a wide range of actions that stakeholders in an organization should decide if it right or wrong ethical or unethical.

From the story the major ethical and legal issues Jim could have identified and ethical issues is paying $100 dollars because there industry released effluent into the river. The ethical question rises whether it was right or wrong for Jim to pay the money because other managers who were there also paid.

It was unethical for Jim to pay $100 because it a lot of money, more so it would have been it would have promoted more disposal of effluent to the river which could cause more harm in the future (Ferrell, Fraedrich & Ferrell 229).

Individual’s decision whether to do right or wrong thing depends on their personal values and principles they have set this include education, age, personal drive and locus of control. Locus of control in Jim’s case is applicable where the issue of giving out cash to Ralph is rather an internal control thing than external control. This is due to the thinking that his behaviour could owe him uncontrollable factors the benefiting from the money. The foremen believe it was right for them to release the affluent into the river once it reaches some level due to the plants outdated equipment. On the other hand Romana, stood her personal decision to give out money to Ralph because she thought she might lose her job due to the plant being shut down because of it being old.

From my person point of view it was unethical for the company to pay out $100 to Ralph. This is because of the company’s serious side effects to the environment. If the company had evaded paying Ralph $100, EPA would have takes the initiative to shutdown and imposes fine to the pulp industry. The fine would have compensated the long time the industry has been polluting the environment, more so for the pulp industry to repair and replace outdated equipment. I also thing the industry does not have corporation culture and ethical culture. The industry did have the capacity to which to know where the problem is so as to repair it, this shows that the organization do not have leadership and corporate culture that promotes ethical issues in the organization. It is evident where employees have become resistant to change, despite many managers that have come to the industry for example the firm is aware about excessive disposal of waste and Romana things the firm cares of the bottom line which is giving Ralph $100.

In conclusion, I consider the whole firm unethical due to ignorance and lack of corporate culture and ethical culture that should streamline all the employees to have moral behaviors and practices in order to ensure that the firm legally operates it duties. 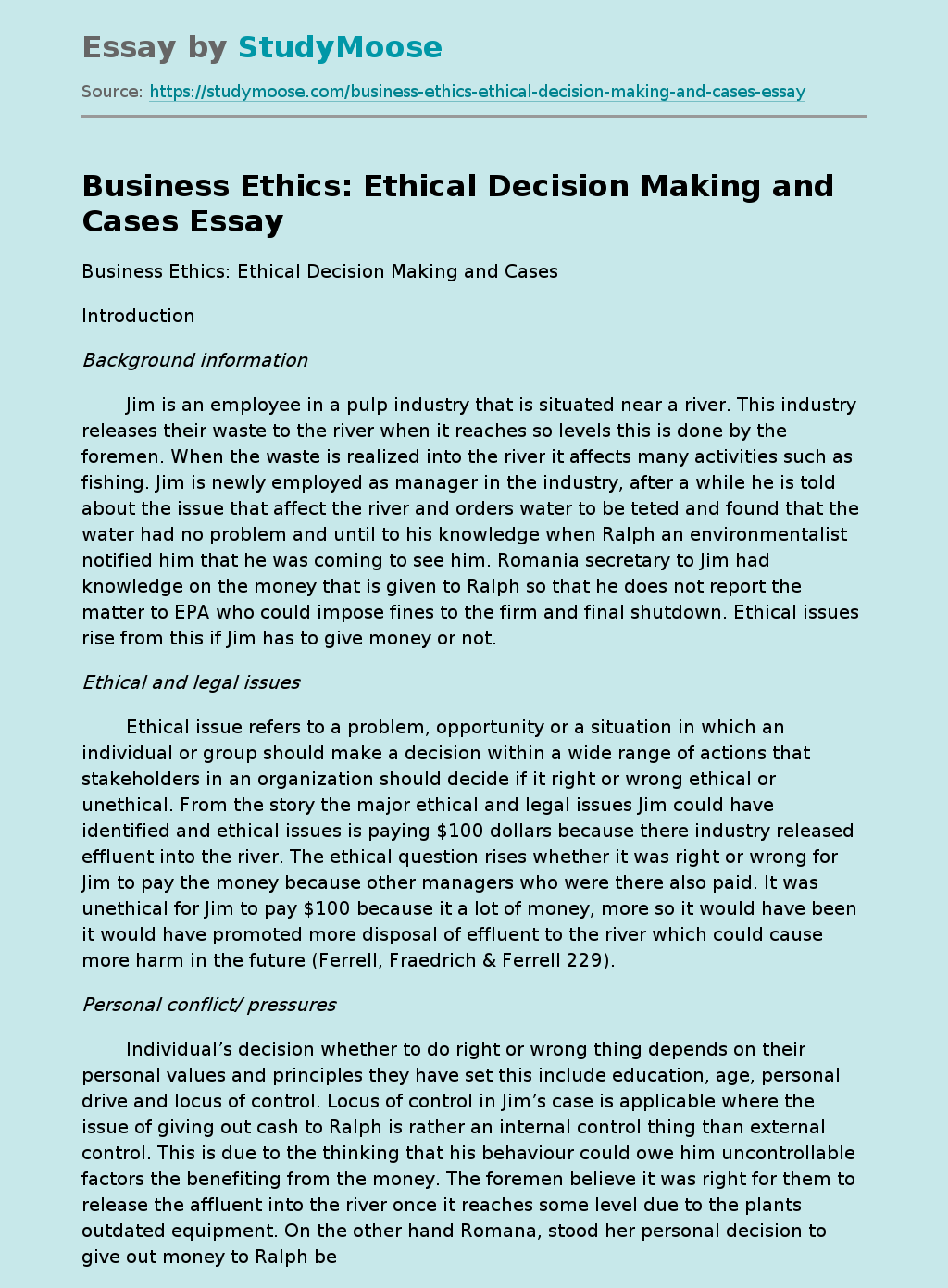