Brief Psychoanalysis of A Perfect Day for Bananafish

J. D. Salinger’s A Perfect Day for Bananafish depicts the psychological struggles of Seymour Glass, a veteran of the Second World War. Through Freudian psychoanalysis, the different aspects of the effects of his war-damaged psyche on his ability to perform in society become clear. There are several instances during which it becomes obvious that Seymour’s superego does not function in the same manner as that of the adults around him. It is also evident that his id is the most dominant force for his unusual behavior, but not by the pleasure principle.

Don't use plagiarized sources. Get your custom essay on
“ Brief Psychoanalysis of A Perfect Day for Bananafish ”
Get custom paper
NEW! smart matching with writer

Rather, it is the childlike innocence that is the facet of his id that is the primary motivation for him to act the way he does. Finally, in the ending, Seymour’s ego comes to the conclusion that it is simply impossible for him to fit into the materialistic society that has come to be. Thus, it can be seen that the war and the society that Seymour returns to after the war play equally important roles in leading up to his suicide.

Seymour’s dysfunctional superego becomes evident during Muriel’s conversation with her mother. The mentions of his actions regarding “The trees.

That business with the window. Those horrible things he said to Granny about her plans for passing away. What he did with all those lovely pictures from Bermuda. ” all point to various actions that indicate that Seymour’s sense of right and wrong-which is associated with the superego-does not recognize the distinction between things that are socially acceptable and things that are not.

Furthermore, it is also implied that this damage to his psychological state stems from the war, which may be a sign of Post Traumatic Stress Disorder (PTSD).

Of course, PTSD was unheard of during this time period, so Seymour remained untreated for it. This defective superego is then unable to contest the id properly. As a result, Seymour’s id is given partial freedom and so he acts childishly, making things up and pointing things out that are considered foolish. One such example is when he asks Sybil whether “Whirly Wood, Connecticut is anywhere near Whirly Wood, Connecticut. ” In fact, the entirety of his interaction with Sybil is an example of the uncontrolled id.

Along with his invented bananafish, this serves to illustrate that his innocence is the primary reason for how he acts. However, this leads to an irreconcilable difference between Seymour and the rest of society, as the rest of society is primarily dictated by their superego. This is best portrayed by the events mentioned in passing during Muriel’s conversation with her mother, and the thing he tells the woman in the elevator: “I see you’re looking at my feet. Whether or not the woman was actually looking at his feet at all is obviously unimportant; the brief exchange between Seymour and the unnamed woman serves to depict the rift between Seymour and the rest of the world. This rift eventually leads Seymour’s ego, which is tasked with the interaction with external stimuli, to the conclusion that he can no longer coexist with the rest of society. As a result, the only course of action that he can see is that of suicide.

Thus, both WWII and the materialism of the society left in WWII’s wake are equally responsible for Seymour’s death. Had the war not damaged Seymour’s psyche to the point where his superego could no longer oppose his id, the whole series of events would not have taken place to begin with. Had society not been converted to follow the ideals of materialism, Seymour would not have found that he was unable to fit into society. But because both did what they did, Seymour’s death became an inherent result of the combination of events that culminated here.

Brief Psychoanalysis of A Perfect Day for Bananafish. (2016, Oct 03). Retrieved from https://studymoose.com/brief-psychoanalysis-of-a-perfect-day-for-bananafish-essay 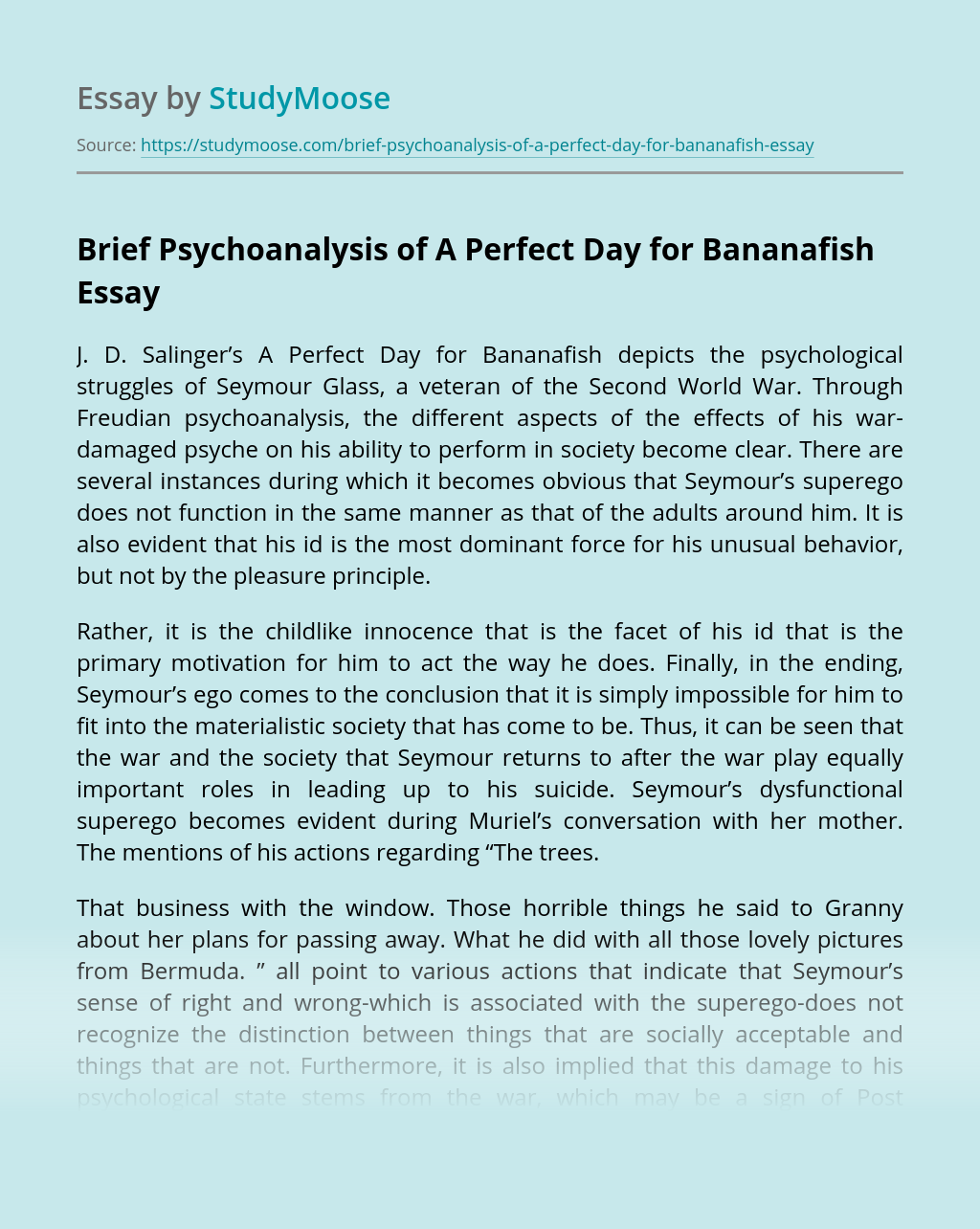