Al Capone, was born on January 17, 1899. He is famous for being a businessman and gangster, who was most important during the Prohibition Era. This era was during 1920-1933. It was a nationwide ban on alcohol; selling, producing, and even drinking it.

The reason for his stardom was because of his million dollar operation, which happened in Chicago. His operation contained many illegal things such as: gambling, prostitution, and bootlegging. Capone earned 60 million, by just selling alcohol. But how did this star, earn his fame?

In the beginning, Capone’s parents were immigrants who were very poor.

Don't use plagiarized sources. Get your custom essay on
“ Brief Biography of Al Capone ”
Get custom paper
NEW! smart matching with writer

Not much occured in his early years, until around the sixth grade. He began to fall behind in school, and his afterschool activities were not playing dodgeball or hopscotch; he started hanging around the docks of Brooklyn, New York, which was the place of his birth.

His teachers were not fans of Capone. They began to beat him, so much that Capone decided to move out of his tenement and go to a much better home and school.

Not only was this just a much better change for Capone, but he also met his wife that he soon would be marrying.

He met his business partner Johnny Torrio while he was running a gambling operation right by Capone’s new home. Al began to run minor errands for Torrio. Johnny was away from Brooklyn for a while, and Al became unemployed.

Torrio came back and introduced Capone to a new gangster friend, Frankie Yale. Yale gave Capone a job as a bouncer at the Harvard Inn.

While working one night, Al made a remark that was not right to say to a woman. The lady’s brother punched Capone, and left three scars on his face after slashing Al, which then gave him his nickname.

Only at the age of nineteen, did Capone then become a father and husband. He married his wife Mae, and their son’s name was Albert. Capone wanted to be a just and right father, so he moved his new family down to Baltimore.

Soon after though, Al’s father died, and Torrio invited him to come back to Chicago, and being his buddy, Al hopped to the offer.

The 18th amendment was finally established, which made Torrio’s business of prostitution and gambling a bit harder to do. Using Capone’s streetsmarts, him and Torrio made a business of bootlegging.

Chicago elected a reformist mayor who said that he would get rid of the corruption in the city. Torrio and Capone moved their base to Cicero. In a 1924 election, it threatened their business.

To ensure they could continue doing business, Torrio and Capone initiated an intimidation effort on the day of the election, March 31, 1924, to guarantee their candidate would get elected. Many of the voters were shot. To respond, they sent in police, and they gunned down Frank, Capone’s brother, in the street.

Torrio decided to leave in 1925, when a group of mobsters threatened his life. Al didn’t listen to his partners advice about keeping a low profile. Al Capone’s business generated $100 million annually.

Capone had many of his enemies shot and killed because of his hate for them. President Hoover wanted to get Capone in jail, and he would do so by prosecuting him over income tax evasion. The government finally convicted him on 22 counts. Capone was found him guilty and would then go to jail for 22 years.

He spent two years in a prison in Atlanta, but that soon ended when he was caught trying to bribe guards. They then sent him to the isolated island of Alcatraz. Capone’s health was increasingly declining. He used to have many diseases as a kid. He began to suffer demina and they moved him to a mental hospital where he would spend his last few days with his wife.

He died on January 25, 1947 of cardiac arrest and pneumonia. Mae, Capone’s wife, tried to keep him isolated. She always said, “I knew it would be too dangerous for him to be out in public.” Mae was a great wife to Al because she was the type of wife who would make spaghetti for him and his gang at 3 am.

Once Al died, Mae stayed with their Palm Island home in Florida, until financial issues forced her to move away. Mae died in 1986. Before her death, she put a match to all of her love letters and notes from Al, that he wrote in prison. The house that they lived in eventually sold for 7.4 million, and it currently can be rented for film shoots. 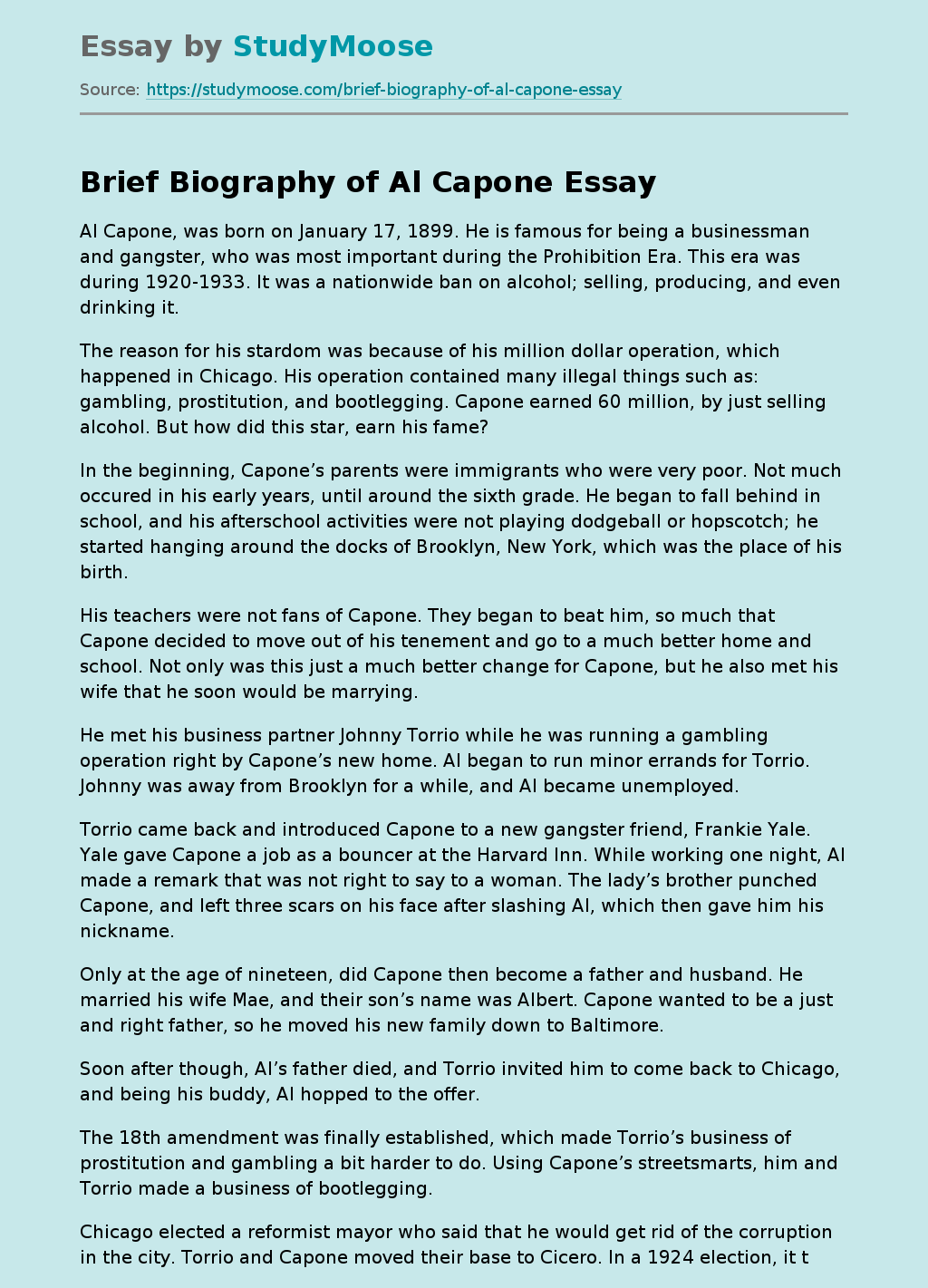