The aim of this assessment is to analysis the long jump technique by applying the following kinetic and kinematics principles: force, inertia, momentum, friction, Newton’s Laws, free body force diagrams and impulse-momentum relationships which underpin the mechanics of sport. The long jump is a speed event which comprises of four phases: approach run, take off, flight through the air, landing. To achieve maximum distance in the long jump the athlete will have to balance three components – speed, technique and strength (Carr 1999).

Don't use plagiarized sources. Get your custom essay on
“ Biomechanics of long jump ”
Get custom paper
NEW! smart matching with writer

The approach phase of the long jump as stated by Hays (1993) is to get the athlete up to the optimum position for take off with as much speed as the athlete can control during this part of the jump so the rhythm in the approach run is important to ensure the ideal speed is achieved at take off and also accuracy in hitting the take off board. The generation of the forward motion is created by a ground reaction force where the earths force is responding to the athletes backwards thrust against the earths surface (Carr 1997).

The ground reaction force R is equal in action line and magnitude to the downwards thrust of the foot during running but in the opposite direction. The force is greater at the heel strike then at mid stance because of the body’s momentum and greater at push-off due to the plantar flexion thrust of the calf muscles driving the body forwards (LeVeau 1992). The force against the earth’s surface is at a slight angle as the athlete’s centre of gravity is slightly forwards.

The law of inertia stated by LeVeau (1992) the body remains at rest until acted upon by an unbalanced force which is proportionate to the body’s weight.

Most jumpers take a long third last stride which lowers the centre of gravity and by making the last stride relatively short allows the hips to dip and drive up (Wirhed 1996). Hays (1993) states the transition from the approach to the take off is the most important part of the technique. The athlete makes body position adjustments in the last two strides of the approach in preparation for the take-off. Long jumper Bob Beamon benefited from the slight reduction in gravity and air resistance when he set the world record in Mexico City (short approach – short sprint).

In higher altitude there is less air which is bad fro long distance runners as they have less oxygen in the air. In 1995 Ivan Pedrosa beat Mike Powell’s record in the high altitude of Italy which proves that there is an assistance of altitude which creates less gravity and wind resistance. The penultimate stride right before take off the jumper’s centre of gravity is lowered, the body id tilted backwards and the performer’s arms and free leg are positioned to the rear of the body Carr 1997).

Lowering the body pre-stretches the muscles of the jumping leg causing an explosive thrust downwards at the earth (ground reaction force). The performer can spend longer over applying the force of the jumping leg by combining the lowering of the body with leaning back slightly. Swinging the arms forwards and upwards adds to the downwards thrust of the athletes downwards leg against the earth’s surface (Carr 1997). The take off phase is to obtain vertical velocity while retaining as much horizontal velocity as possible (Hays 1993).

There is a large amount of force produced from the last stride when the athlete’s foot hits the ground. Hays goes on to say that the reaction to the extensor muscle when a large force is exerted against the ground forces the athlete into the air as the hip, knee and ankle joints are forced to flex a little when large loads press on them. The athlete would aim for around a 20-22i?? (Carr 1997) as anything higher would reduce the final distance because there would be a decline in the run-ups velocity.

Mathematically this law can be expressed as: F = dp = d (mv) dt dt F being the force acting on the body which equals the rate of change (d/dt) of momentum (mv) (Bartlett 1997). The equation below shows that mass times acceleration has a relation to force F = dp = m dv = ma dt dt The two equations can be rearranged to show the impulse-momentum relationship (Bartlett 1997). Fdt = d(mv) The impulse is evaluated by numerical/graphical integration, which can be performed from a force-time record obtained from a force platform (Carr 1997).

If the mass is constant the equation can be, F? t = m? v, where F is the mean value of the force acting during a time interval ? t during which the velocity of the object changes by ? v (Bartlett 1997). The change in vertical lift of the jumper from the horizontal velocity depends on the impulse of the force exerted by the foot off the board and inversely proportional to the mass of the jumper. From the take off phase the main objective in the flight of the technique is to undertake the optimum body position for landing (Hays 1993).

However the take off foot pushing back on the board causes the body to rotate forwards which will continue until a something has acted against it to stop the rotation (Carr 1997). The speed of rotation is controlled by the body’s moment of inertia. So this usually provides the performer with two main techniques to choose from: the hang  or the hitch-kick which America’s Carl Lewis is famous for. The hang technique uses a sweeping movement of the legs to increase the moment of inertia and to counteract the rotation (Hays 1993).

Carr (1997) and Wirhed (1996) goes on to say if there is a large forwards rotation the athlete must be outstretched in the air (picture 3 in figure 4) to slow down the rotation, if there is a tightly fixed position then the rotation is a lot faster which results in a poor jump, so the less rotation the athlete has off the board then the sooner the athlete can be in a better position to reduce air resistance. The hitch-kick is slightly different but it has the same objective as the hang jump.

The movement in flight of one part of the jumper’s body causes the other parts to move in opposing directions. The rotation of the arms and legs are used to counter act the unwanted forwards rotation that inevitably occurs when the athlete takes off. Hays (1993) says the purpose of this exercise is to move the athletes trunk into an optimum landing position by providing a necessary balance between the angular momentum of the body parts moving in one direction and the angular of momentum of the parts moving backwards.

With this action and reaction the athlete’s trunk rotates backwards as the lead leg and arm swing downwards and backwards. The last phase to complete the long jump is the landing, it’s critical to get those vital centimetres to land right. A maximum jump is obtained when the heels touchdown at the point where the centre of gravity of the body would have landed (Wirhed 1996). If the heel strike is too far in front the athlete will fall backwards and if they touch sooner then the athlete will roll forwards. 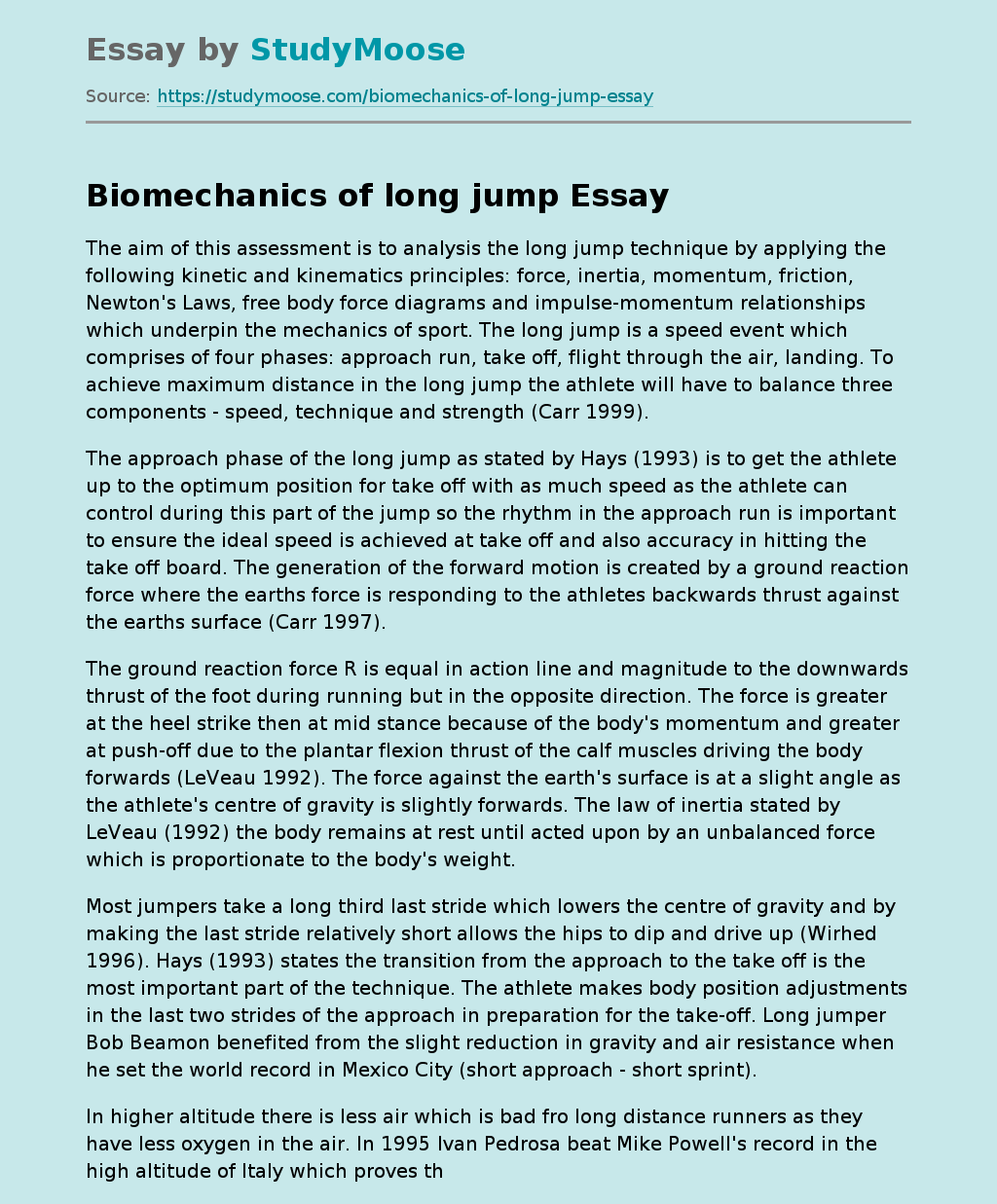