Foreshadowing – in which a certain image or event may hint at something that becomes more significant later on in the story.

Authors often use different literary devices to grab the reader’s attention, or to establish basis for plot development later on in the novel. In Herman Melville’s Billy Budd, Melville uses the literary device of foreshadowing to allow the audience to be aware of Billy’s inevitable fate before the characters in the novel, thus creating a feeling of suspense within the novel.

Don't use plagiarized sources. Get your custom essay on
“ Billy Budd – Foreshadowing ”
Get custom paper
NEW! smart matching with writer

In chapter one, the incident with the Red Whiskers (12) functions as a foreshadowing of Billy’s confrontation with Claggart. This is very similar to what happens later between John Claggart and Billy (58). Melville uses the incident to show that although Billy Budd is a gentle man, unwilling to quarrel, he can become aggressive if provoked. This makes the later incident more believable, since the reader has already seen Billy behaving in this way. The Red Whiskers is similar to Claggart in a number of significant ways.

Like Claggart, the Red Whiskers dislikes Billy, and out of sheer envy he “bestirs” himself to pick a fight with Billy.

Melville begins using foreshadowing early in the novel when he describes Billy Budd as a tall handsome sailor that was well adored by mostly all who knew him. Melville makes Billy seems flawless until he informs the audience using straight, matter of fact sentences that Billy has a speech impediment that only seems to rear its ugly head whenever Billy has something of importance to say (17).

The fact that Billy’s speech impediment only shows when he has something significant to say helps inform the audience that something of significant importance will happen later on in the novel (57). Billy’s inability to speak during times of emotion will mean that later, he cannot speak the truth and save himself.

Vere’s nickname is ironic in a second way, although the narrator does not point this irony out explicitly. The character referred to as “Starry Vere” in the Marvell poem is a severe disciplinarian (24), whereas Captain Vere is anything but harsh or brutal in his conduct. But while the name seems ironic at this point in the story, the passage quoted from the poem provides an important piece of foreshadowing. Vere does indeed impose an unexpectedly harsh discipline upon Billy, and his commitment to principle is what prompts him to be severe (60).

Without the element of foreshadowing within Billy Budd it seems almost incoherent that the events of the novel would have come together. Melville’s use of foreshadowing allows him to take the audience on an unforgettable journey through the life and troubles of Billy Budd and allows the audience to get a full understanding of the situations leading up to Billy’s tragic end. 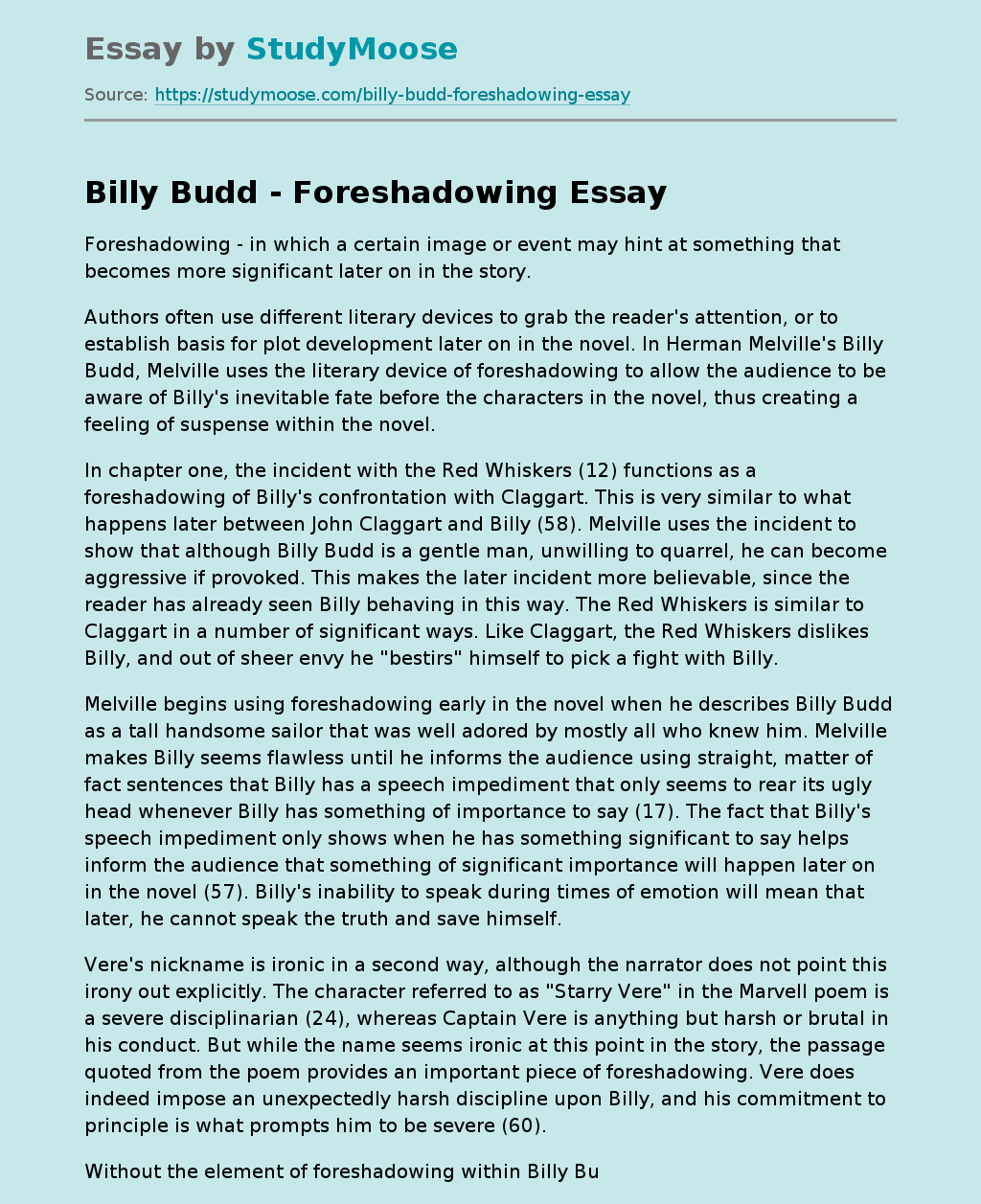