Bhagat Singh, the epitome of heroism, was a revolutionist during the Colonial Period in India. Bhagat Singh was well known for his admiration of martyrdom.

Turn in your highest-quality paper
Get a qualified writer to help you with
“ Bhagat Singh, Indian Freedom Fighter ”
Get high-quality paper
NEW! AI matching with writer

Arya Samaj had a strong on the life of Sardar Kishan Singh. His uncles as well as his father were all part of the Ghadar Party that was led by Kartar Singh Sarabha. The Jalianwalabagh Massacre, which took place in Punjab in 1919, had a deep impact on the mind of young Bhagat Singh. In the year 1920, Mahatma Gandhi started the Non Cooperation Movement. Bhagat Singh actively participated with a great hope that this movement would bring freedom to the country. Bhagat Singh challenged the British rule and followed the wishes of Mahatma Gandhi by burning his government-school books and imported clothes.

During his early age, Bhagat Singh used to read a lot of literature and poetries especially written by Punjabi writers. Allama Iqbal from Sialkot, who was also a freedom fighter, was Bhagat Singh`s favourite poet. By winning an essay competition that was organised by Punjab Hindi Sahitya Sammelan in 1923, young Bhagat Singh attracted the attention of the Punjab Hindi Sahitya Sammelan. Initially, he studied at the National College in Lahore. But after some time, he ran away from his home in order to escape early marriage.

Bhagat Singh became an active member of Naujawan Bharat Sabha and also joined Hindustan Republican Association, which was headed by Ashfaqulla Khan and Ram Prasad Bismil. Later on, he became the leader of the association. On 30th of October, 1928, a protest was led by Lala Lajpat Rai against Simon Commission but that too in a non violent way. During this protest, the police resorted to Lathi charge and Lala Lajpat Rai was severely beaten. After this incident, Bhagat Singh with other revolutionaries, planed to kill the police chief. But because of a mistaken identity, J. P. Saunders, a Deputy Superintendent of Police was shot instead of Scott. Immediately after that, Bhagat Singh left Lahore and he also shaved his beard and cut his hair to avoid recognition.

After this incident, the Defence of India Act was enacted by the British government in order to give more power to the police. On the other hand, in response to this act, Hindustan Socialist Republican Association planned to blast a bomb particularly in the assembly, where the act was supposed to be passed. According to their plan, it was decided that Bhagat Singh and Batukeshwar Dutt would throw the bombs. On April 8, 1929, they threw the bombs; however it neither killed nor injured anyone.

Bhagat Singh and Batukeshwar Dutt surrendered themselves for arrest. They were sentenced to Transportation for Life for the incident. It was after their arrest that the British rulers came to know that Singh was involved in the murder case of J.P. Saunders. He admitted his crime and made statements in the court against the British as a tool to publicize their cause of freedom struggle. However, the court ordered the case to be carried out without members of the association who were present at the hearing. This order produced a chaos amongst the supporters of Bhagat Singh.

Bhagat Singh along with other prisoners launched hunger strike in the jail. The main reason behind this was that the British thieves and murderers were given better treatment than the Indian prisoners. According to law the Indian political prisoners were supposed to be given better rights. He also
demanded that the Indian political prisoners should not be forced to do any sort of undignified work. This hunger strike lasted for 63 days and ended with the submission of British power. With this, he gained tremendous popularity.

Bhagat Singh used to maintain diary while in jail. The diary was a precious one as he made numerous notes relating to the quotations and popular sayings of various people whose vies he supported, prominent were of Karl Marx and Friedrich Engels. Political thought of Bhagat Singh`s evolved gradually from Gandhian nationalism to revolutionary Marxism. By the end of 1928, Singh and his comrades renamed their organisation the Hindustan Socialist Republican Association. After going through the teachings of Karl Marx, Friedrich Engels, and Vladimir Lenin, he came to believe that, India with such a large and diverse population could only survive properly under a socialist regime. Bhagat Singh became the first socialist leader of the country.

Bhagat Singh was hanged on 23rd March, 1931 at 7:30 pm, in Lahore Jail, along with fellow revolutionaries Sukhdev and Jai Rajguru. After his execution, youths in the country rioted in protest. Thus the desire of Bhagat Singh to inspire thousands of youths to assist the Indian independence movement took a serious turn. 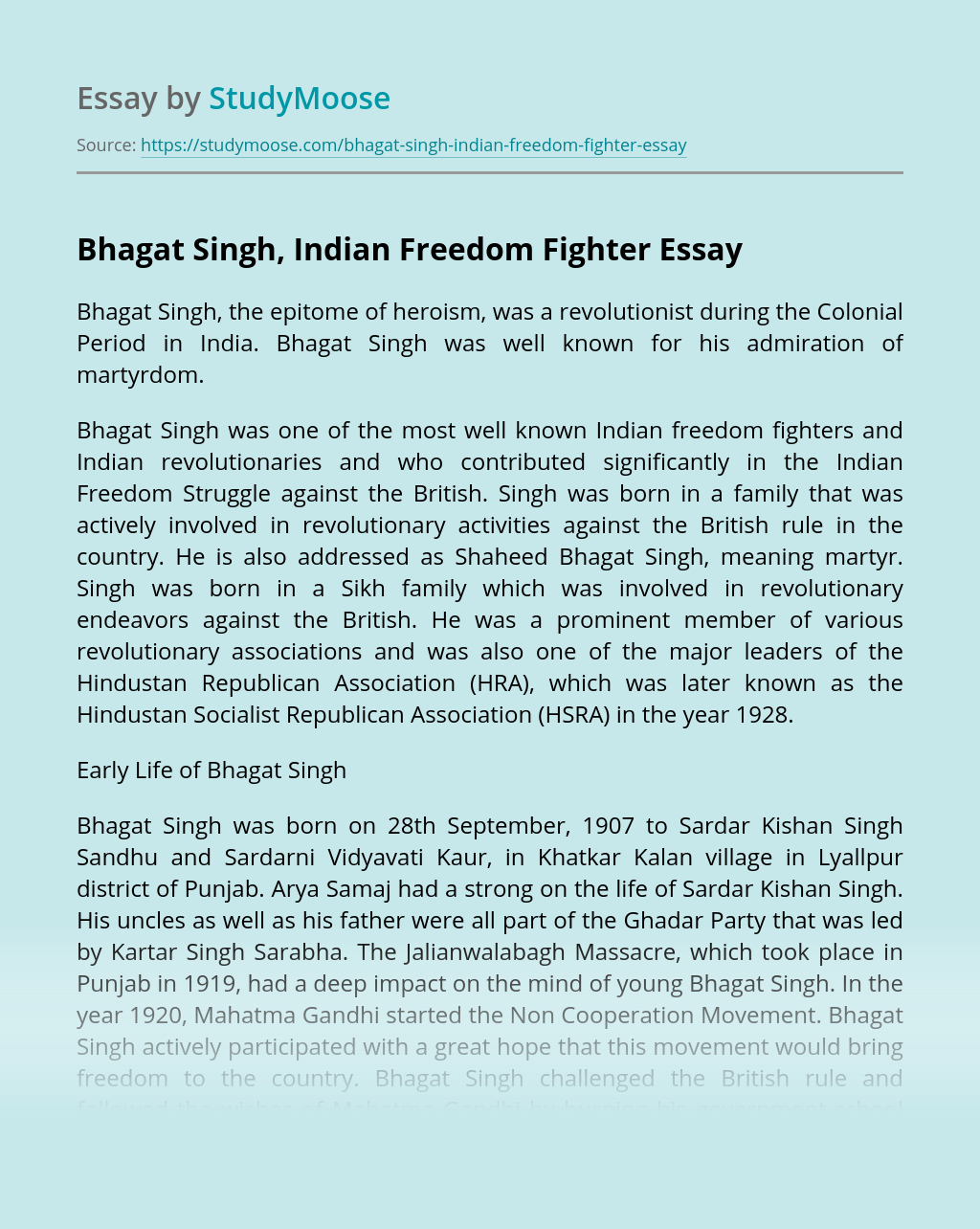 Turn in your highest-quality paper
Get a qualified writer to help you with
“ Bhagat Singh, Indian Freedom Fighter ”
Get high-quality paper
Helping students since 2015
Stay Safe, Stay Original