Belonging to a community

Belonging to a community or a group has a significant impact on an individual sense of belonging.

Belonging is a concept that provides confidence and support to individuals who are able to connect to people or places. Individuals that belong to a community or a group have portrayed that there are significant impact that do affect a individual own sense of acceptance, which could lead to a better wellbeing. However not belonging to a community or a group has negative impact on the individual as presented by Peter Skrynecki of Immigrant chronicles, J.

Don't use plagiarized sources. Get your custom essay on
“ Belonging to a community ”
Get custom paper
NEW! smart matching with writer

D. Salinger Catcher in the Rye and The related text. Belonging is established by individuals who are able to search for a place to belong, not realising that it is the perceptions and attitudes, not the place that allow us to belong. Immigrant chronicles by Peter Skrynecki, the poems “St Patrick’s College”, and “In the folk museum”, have displayed a significant impact on an individual’s sense of belonging. In St Patrick’s college, Peter Skrzynecki explores the effects of schooling on an individual sense of belonging and self. Time is a deciding factor that strengthens an individual connection to a community or a group creating a stronger sense of belonging to the community or group.

The repetition of “For eight years” is to further stress the amount of time that passed and that the persona has still not been able to make a sense of connection, to the school or to the bus and learning the religion there at a superficial level. The school religion for the persona was that he “Could say the Lord’s Prayer/ In Latin, all in one breath.

In the folk museum the persona perceives his lack of belonging in the setting of the museum and its surrounding as the poet Peter Skrynecki explores concept of alienation in a more general way. The poem “In the folk museum” is an abstract look at the persona’s emotional turmoil as well as the persona choosing not wanting to belong to the museum. This is portrayed by the enjambment of the two lines “ To remind me of a past/Which isn’t mine”, makes the emphasis fall heavily on “Which isn’t”, highlighting the persona’s alienation for the words and the objects in the museum. Not being able to establish a connection with your heritage, affects a person’s sense of belonging as understanding one’s self is the key to belonging, relating to Feliks Skrynecki as the persona does not understand why “His Polish friends/ Always shook hands too violently”, as that is the father culture. The persona’s swift exit “And I leave without wanting a final look” brings the use of connection on “final”, displaying how he is not belonging as the persona chose not to look back.

The alliteration, “without wanting” creates a sense of the persona’s firm decision not to belong in this place. Yet, “At the door the old woman’s hand/ Touches mine”. The syntax causes the stress to fall heavily on the word, “Touches”, highlighting the woman’s attempt to make some connection. This human touch contrasts to the earlier “cold” touch of the “grey clay bottle”. The persona’s earlier comparison of the woman with the cold bottle is undercut by her attempt at warmth. This touch does not imply relationship though, as is seen in the final question, “Would you please sign the Visitors’ Book?” The polite modality “Would you please” and the word, “Visitors” emphasises that the persona is an outsider in this place. The concept of belonging is that we choose whether to belong or not, and that not belonging does have a significant impact on an individual sense of belonging as displayed in the folk museum, as the persona was not able to make connection to the old woman or to the relics displayed in the museum.

Holden Caulfield in Catcher in the Rye displays that belonging to a community or a group has a significant impact on an individual sense of belonging as emphasis by Holden Caulfield has displayed a similar contrast to the Immigrant chronicle of St Patrick’s College and Folk museum through similar setting and representing concept of belonging. Holden Caulfield has trouble establishing his belonging at school, Pencey Prep. When Holden states that he did not want to join the football field match even though everyone was there. “You could see the whole field from there, and you could see the two teams bashing each other all over the place.” This show Holden choice to not go, he chooses to alienate himself from the crowd, watching people instead of connecting with them. He rejects the conformity of the system: the manufactured school spirit that expects everyone to support the school football team. In contrast to Peter Skynecki “The Folk Museum’ when Holden was at the museum, he is able to establish a connection with the relics through his memory. The view of never changing is something that is not possible as people will have to grow up and as a result will have different goals.

“The best thing, though, in that museum was that everything always stayed right where it was”. It shows that Holden chooses to belong to the museum as he is able to remember that there are no changes to the museum. The sense of familiarity of where you know where everything goes shows his sense of belonging. Holden reason for being able to connect to the museum is that it never changes. The museum is like a sanctuary for Holden, as time does not seem to affect the museum. In conclusion by showing individuals that do not belong to a community or a group, it depicts that it is inherent for people to realise the significant impact on individual that do find their own sense of belonging, and are able to belong to a community or a group, as presented by Peter Skrynecki of Immigrant chronicles, J.D. Salinger Catcher in the Rye and The related text.

Belonging to a community. (2016, Apr 03). Retrieved from https://studymoose.com/belonging-to-a-community-essay 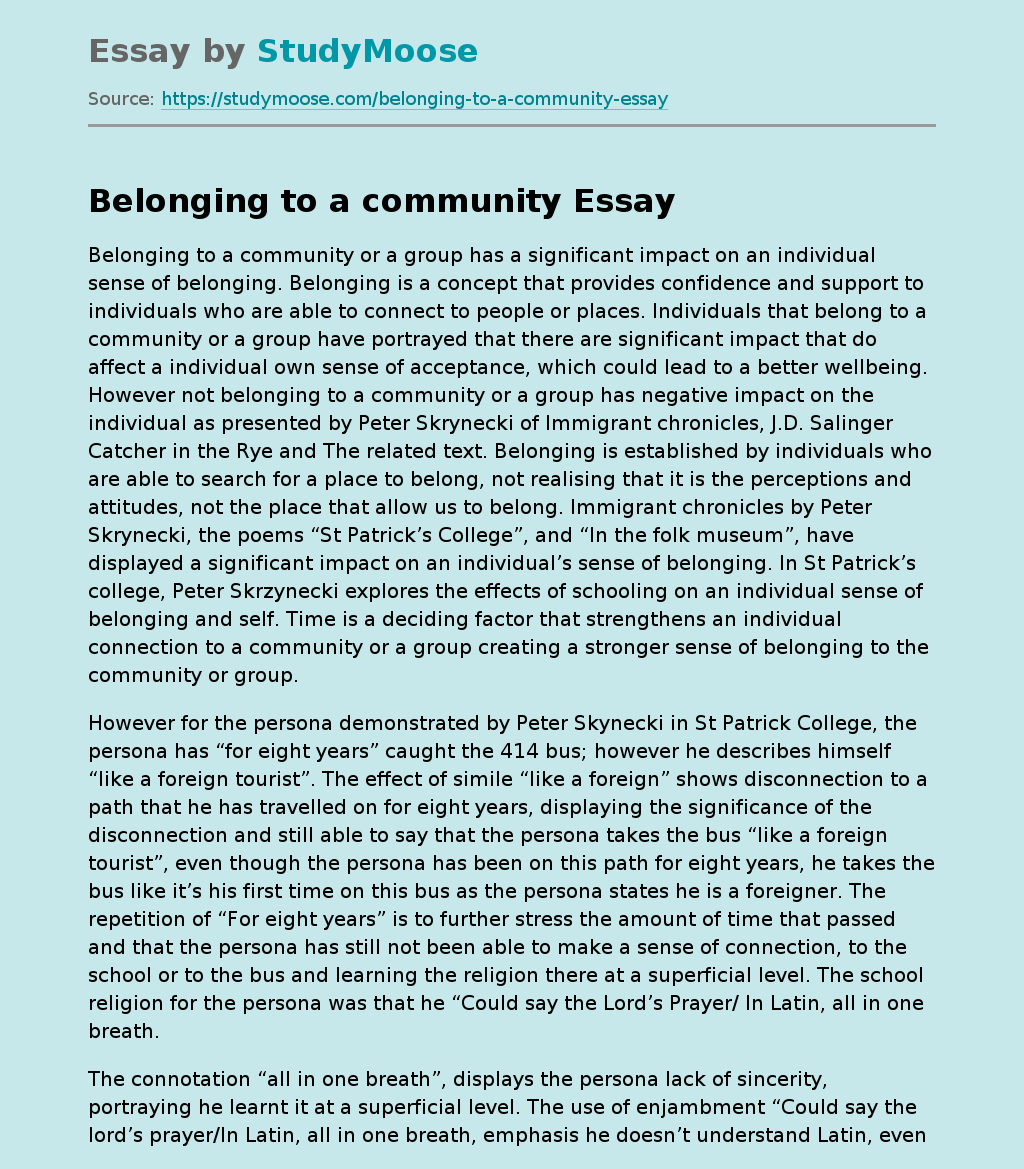