Avoiding Reality in An Occurrence at Owl Creek Bridge

“As he is about to clasp her he feels a stunning blow upon the back of the neck; a blinding white light blazes all around him with a sound like the shock of a cannon—then all is darkness and silence”. Ambrose Bierce has a unique way of captivating reader’s attention and it is perfectly shown in his short story “An Occurrence at Owl Creek Bridge”. The story tells about a man in southern Alabama during the Civil War, which is about to be hanged by a group of Union soldiers.

Don't use plagiarized sources. Get your custom essay on
“ Avoiding Reality in An Occurrence at Owl Creek Bridge ”
Get custom paper
NEW! smart matching with writer

This man to be hanged is identified as a gentleman named Peyton Farquhar who attempted to destroy the Owl Creek Bridge, the same one they are standing on. Suddenly, the rope snaps and he falls into the river where he somehow manages to swim ashore in order to escape from the Union soldiers. As he pulls himself ashore, he now starts the long journey home. After walking all day and night without feeling “the roadway beneath his feet” he arrives home and as he is about to hug his wife, he feels a strong pain in his neck and hears a loud noise.

Farquhar was now dead by hanging, and all of his escape was just a dream of his. It is set in the Owl Creek Bridge in Alabama where Peyton Farquhar is about to be hanged early in the morning. The whole story happens just in one day, even though the author mentions flashbacks of Peyton’s past.

On one side of the creek there is forest and on the other is a group of Union Soldiers. There is a cannon hiding in a line of trees and the soldiers are preparing to execute Farquhar with a rope around his neck.

There is only one main character in the story and three secondary characters. Peyton Farquhar is a plantation owner who comes from a wealthy family from the south. However he is a strong supporter of the Southern cause. He is arrested and is to be hanged by the Union soldiers because he attempted to destroy Owl Creek Bridge so that the Union soldiers wouldn’t pass by his hometown. There is also Mrs. Farquhar, Peyton’s wife who was a small but significant role in the story. She is the one who alerts Peyton of the arrival of the Union soldiers to their town.

The groups of Union soldiers include executioners, a Lieutenant who gives the final orders; there are sentinels, officers and also soldiers along the shore. There is also a Union Scout, which is mentioned in one of Farquhar’s flashback, who is a soldier that rides onto Farquhar’s plantation asking for a glass of water wearing Confederate gray. He later on turns out to be the one who warns the Union soldiers about Farquhar’s plan to burn down Owl Creek Bridge. The story is divided in three parts.

None of them are written in first person. Most of the story is told in a third person point of view. The storyteller can observe events but cannot enter the mind of ant character and cannot change ant of his or her thoughts. However in some parts of the story, the narration changes to omniscient third person point of view. We know this because the author takes the reader inside Farquhar’s mind to show how his mind interprets reality. When it comes to talking about the theme, Peyton Farquhar denies reality. He avoids it.

This is why he enters into the delusional state of mind. While being hanged he dreams that he escapes after the weight of he’s body breaks the rope and he swims to safety, and long after he returns to his home. Even though this dream lasts only seconds, in Farquhar’s mind it lasts the whole day. This could be a way of the author to say that Farquhar refuses to accept the reality that is going on during the civil war, where even gentlemen like him who support the Southern cause can be victims of what the barbarous Union soldiers can do.

The story was published in 1891 right after the civil war in the United States of America. Bierce tries to express how the cruelty took place during the years of the Civil war, how slaves were treated and condemned. By Farquhar’s character Bierce expresses how anybody who opposed the Union to support the Southern cause was seen as a rebellious person no matter his social position. There is a controversy between critics when it comes to categorizing this short story into a literary form. Some critics say that the story is a narration: it has a beginning, a middle and an end.

However some critics believe that because of the ending, the story is more of a thriller, suspense or even mystery. Bierce uses a unique way to shift from different tones during the story. He changes from an authorial realistic voice, to a fantastic tone in order to immerse into Farquhar’s mind. “An Occurrence at Owl Creek Bridge” is a very interesting story with a surprising twist. Ambrose Bierce uses many different techniques to show the reader how brutal and savage the Civil war was like and how people was treated. This short story changed the American culture.

Avoiding Reality in An Occurrence at Owl Creek Bridge. (2017, Jan 15). Retrieved from https://studymoose.com/avoiding-reality-in-an-occurrence-at-owl-creek-bridge-essay 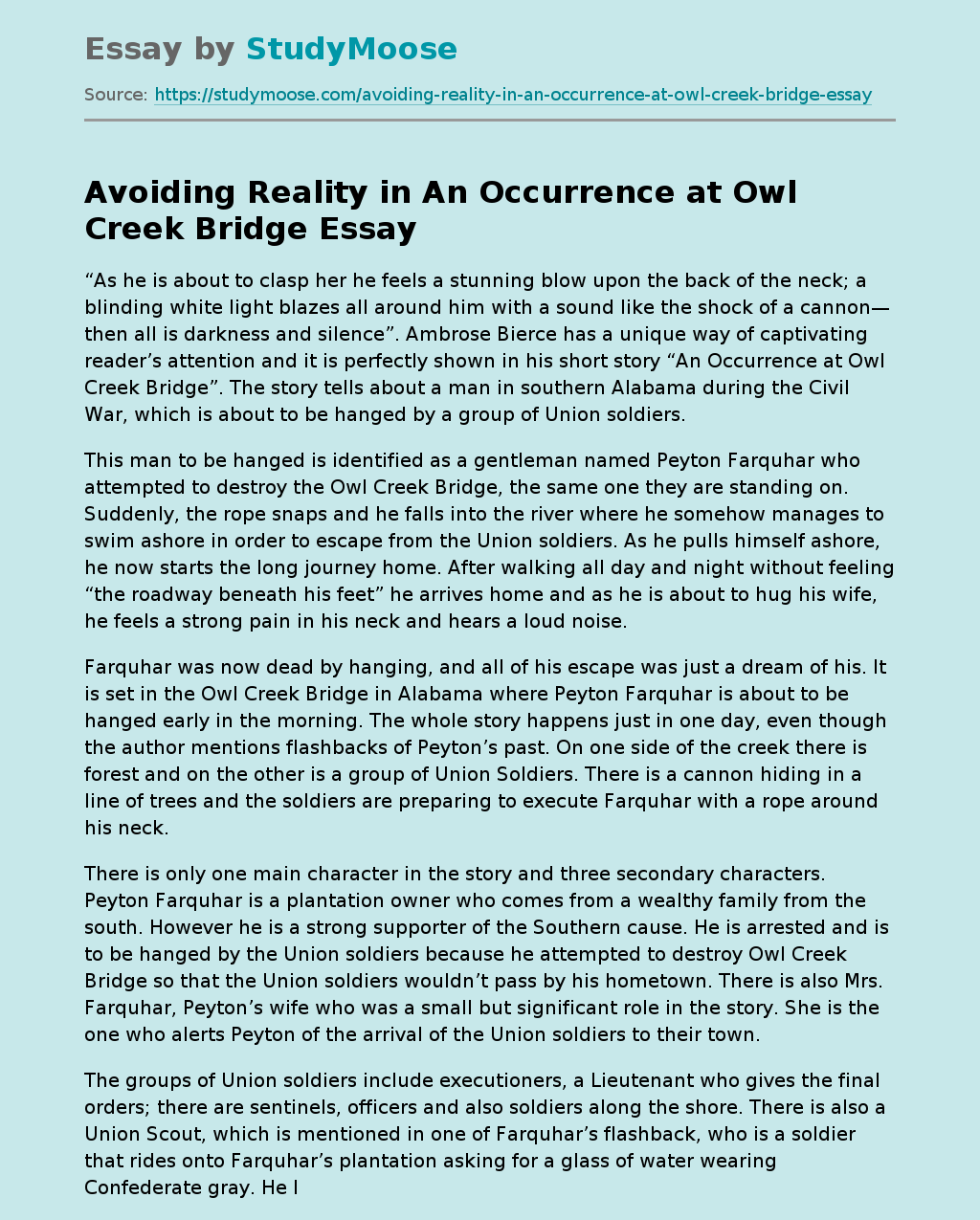