Attributes of Jonathan Iwegbu of “Civil Peace” by Chinua Achebe

Chinua Achebe was born Albert Chinualumogo Achebe in the Igbo village of Ogidi on 16th November 1930 to Isaiah Okafo Achebe and Janet Anaenechi Iloegbunam who were coverts to the Protestant Church Mission Society in Nigeria. Achebe was a Christian; he attended Sunday school every week. He received an early education in English, but grew up surrounded by a complex fusion of Igbo traditions and colonial legacy. He moved away from his family at the age of 12 to the village of Nkede, four kilometers from Owerri.

Don't use plagiarized sources. Get your custom essay on
“ Attributes of Jonathan Iwegbu of “Civil Peace” by Chinua Achebe ”
Get custom paper
NEW! smart matching with writer

He studied literature and medicine at the University of Ibadan in 1958; after graduating, he went to work for the Nigerian Broadcasting Company in Lagos and later studied at the British Broadcasting Corporation staff school in London. During his time in NBC, he was central to a new Nigerian literary movement that drew on the oral traditions of Nigeria’s indigenous tribes. Although Achebe wrote in English, he attempted to incorporate Igbo vocabulary and narratives. Things Fall Apart (1958) was his first novel, and remains his best-known work.

It has been translated into at least forty-five languages, and has sold eight million copies worldwide. Achebe later served as the David and Mariana Fisher University professor and professor of African Studies at Brown University in Providence, Rhode Island. He died on March 21, 2013 at age 82 in Boston, Massachusetts.

“Civil peace” is a short story by Chinua Acbebe in 1971. It is about the effects of the Nigerian civil war on the people, and the civil peace that followed.
Jonathan Iwegbu considers himself “extraordinarily lucky” after surviving the civil war with his wife and three of his four children, and now faces the uncertain future with optimism.

He gives thanks for what he does have rather than regret what he has lost. He counts all his blessings he has been given, chief among them is four heads that is his family, and after that, his scant materials possessions, his bicycle and his home. He uses these possessions to immediately begin rebuilding his life; the bicycle becomes a taxi, and the house becomes a bar. His wife Maria was cooking food whereas his children were also picking mangoes for sale to make life worth living. Jonathan cannot cast a positive light on the thieves’ assault; when the 20 pounds given to him as ex gratia after returning over the rebel currency. This money was taken away from him by robbers in that night, he still never complains about the loss of the money, a significant sum. Instead, the next morning finds Jonathan, and his family busily preparing for hard work again, already looking ahead to future because “Nothing puzzles God”. He was a determined and endured person.
Jonathan Iwegbu was a grateful and thankful man in life. He really appreciates the survival of his wife and the three children. Jonathan was also grateful thankful for getting his bicycle back as well as for the existence of his little house in Ogui overside. He recognizes that even though his house exists, there is nothing more important than the survival of his family. He talks with love and great respect of his family though he lost his youngest son.

Jonathan Iwegbu is not only grateful and thankful but also an entrepreneurial. He could start business without having capital. Jonathan looks for possibilities at every step of his life to make sure his family survives. His children picked mangoes near the military cemetery and sold them to soldier’s wives for few pennies and the wife also started making breakfast akara balls for neighbors to start life after the war. Jonathan also picks up bits of old zinc and wood and soggy sheets of cardboard lying around the neighborhood as materials to fix the windows, doors, and roofs of his little house. He was able pay a destitute carpenter fifty Biafran pounds to put his little house back and moved in with his family after the civil war. Jonathan didn’t expect any money from a friend or family member to start business with as people normally do in recent times.
Jonathan Iwegbu also has the attitude of perseverance in life. He keeps moving on and on to ensure his family survives no matter how difficult the situation is. Jonathan never gets discouraged in bad or worst circumstances. He was able to organize his family early in the morning to find something to do for living, right after the night his 20 pounds was taken away by the robbers.

Jonathan as a religious person who has faith and trust in God. His personal adage “nothing puzzles God” is the personal faith he has in God that, with God all things is possible and nothing is difficult to God. Getting his bicycle back and the existence of his house are all because miracle of God. Mentioning and swearing the name of God when he was talking to the robbers in the night shows his faith and trust in God. He told his sympathizers the morning after the robbery let egg rasher perish in the flames! Let it go where everything else has gone. Nothing puzzles God.
Chinua Achebe was born in the Igbo village Ogidi, Nigeria on 16th November 1930. He attended the University of Ibadan. Achebe served as professor at David Mariana Fisher University and also a professor of African Studies at Brown University in Providence, Rhode Island. “Civil peace” was written by Chinua Achebe in 1971. It’s about the effects of the Nigerian civil war on the people and the civil peace that followed.

Jonathan Iwegbu has survived the civil war with his wife and three children. He cherishes his still-working bicycle that buried during the war to make it would not be stolen. He used the bicycle to start a taxi service and his wife and children also cook and picked mangoes for sale after the war. The 20 pounds given to him, as ex gratia was taken away by robbers. Jonathan was very pleased with the survival of his family and also for getting his bicycle back. Jonathan Iwegbu never sits back after the war. He was able to start life through hardworking. He was picking up old zinc and wood and cardboards as materials to fix part of his little house. The wife sells akara balls whiles the children picked mangoes and sell them for pennies after surviving the war. Jonathan is a religious character and has faith in God. He has the believe that God can redeem him from any difficult situation, hence his personal adage “Nothing puzzles God”.

All these unfavorable experiences could have demoralized Jonathan. Instead, he is a person of integrity and humble. 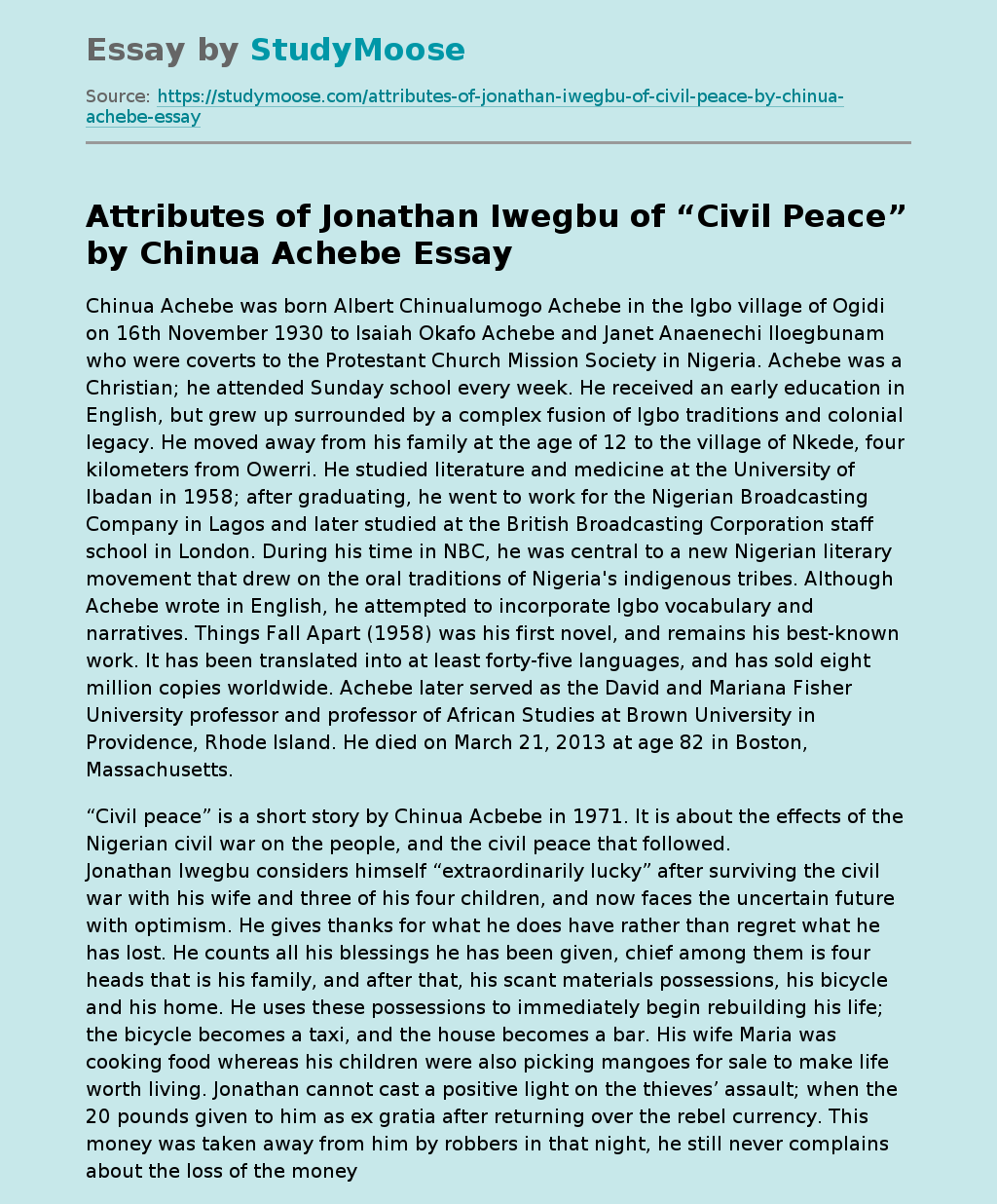