Faith has always been a guiding force in man’s life. Chinua Achebe’s novel Things Fall Apart is a story that describes the effects of a new Christian religion in a tribal village of Africa. The tribe has their own language, known as Obi, a dignified culture and a value system that has continued for many years as they trace back into their ancestry. Yet, voids that this culture can no longer fill for modern tribesmen enable white missionaries to intrude upon this system and convert many of the tribe’s younger members to the Christian faith.

The tribal system falls apart because younger members are unable to remember persons of the past, unable to relate to violence when they have lived in safety and peace and are uninterested in a faith that does not fulfill their needs for music, joy and love, instead of discipline of a higher being. Okonkwo, the protagonist of the story, could remember to “another time” when children, like his own son Nwoye, were not lazy.

He could also remember the indolence of his own father, Unoka, and that his father had not received any titles as a clansman. He was determined to be a respected farmer of yams to ward off the shame of his unsuccessful and dishonorable father.

Fortunately, among these people a man was judged by his worth and not according to the worth of his father… As the elders said, if a child washed his hands he could eat with kings.

Okonkwo had clearly washed his hands and so he ate with kings and elders. (page 8) This was Okonkwo’s motive in life and so he remained prosperous throughout his life and worked hard to prove to others that he was not the same man as his father. Unfortunately, this was not the feeling shared by many in the clan and Okonkwo, in trying to make-up for his father’s mistakes, took on the responsibilities of an old man as a young boy and had the mind set of an elder in the community because as was stated, those were the people he ate his meals with and held his discussions with.

Okonkwo’s own son, Nwoye, did not have the same work ethic and was not working to prove his manhood to the rest of the village. Therefore, for Okonkwo to expect hard work ethics of his son by instinct was unrealistic, because Okonkwo’s work ethic was certainly not a genetic result either. This work ethic however is a central value of the community and when younger members of the generation do not feel as though they are responsible for the tribe’s continued existence then they may not feel as though an active participation in village life is necessary.

On the other hand, perhaps Okonkwo’s work ethic was much stronger than the normal that is necessary for the tribe to continue to flourish and he beats Nwoye forgiving only the minimum amount of work expected of him. Perhaps it is the feeling of failure that turns a member of the tribe like Nwoye to Christianity. Perhaps he felt that he would be an inadequate member and would be unable meet the standards necessary for the tribe to succeed and so he turned to the missionaries who were accepting of everyone, even those who had been officially exiled from the village. Though Okonkwo’s father had been lazy, he had always been an encouraging father and assured his son that he would succeed.

Early on evidence of this kind of support is suggested. Do not despair. I know you will not despair You have a manly and a proud heart. A proud heart can survive a general failure because such a failure does not prick its pride. It is more difficult and more bitter when a man fails alone.(p.24-25) However it is easy to recognize that in washing his hands completely of his father’s ways Okonkwo may have also washed away the values of gentleness, supporting the ones near to him and the love of rest and time to relax. This leads to another important observation leading to the fall of the clan. Okonkwo’s inability to see the importance of childhood and the insignificance of constant violence makes it difficult for him to relate to members of the clan such as Nwoye.

There are times when Nwoye would like to hear stories. He likes stories of nature and the moral lessons they can provide for him to keep him from making the same types of mistakes. Okonkwo likes him to hear stories of war, of fear. “Masculine stories of violence and bloodshed.” Blood of his ancestors, of his past. Nwoye knew that it was right to be masculine and to be violent, but somehow he still preferred the stories that his mother used to tell, and which she no doubt still told to her younger children- (p.53) This type of violence had not occurred in the children’s time in the village. Fighting for their lives and village was a thing of the past, drastic actions that were taken by their ancestors to hold onto and cherish. It was something that the children could not relate to as they were unable to find interest in the stories of past wars with other villages.

It is probable that like Nwoye, many children preferred the stories told by their mothers. These stories that centered around events in nature were something that every child could relate to within his or her life and they were able to find purpose and meaning and relate the moral lessons to the actions they would take in their lives as they grew up. In Christian history, Jesus often taught his disciples through parables. These parables were stories that were easy to understand because they were based on daily events in the peoples’ lives. They were not necessarily true stories and were never of war or violence to simply convey the message of courage. This type of story is the kind that Nwoye and other children seemed to relate to and is probably one of the many aspects of Christianity that the people, including Nwoye, would come to love and believe in strengthening their faith in the Christian God.

And so finally, there is the thought that the younger generation, having never met their warlike ancestors, and experiencing only pleasant, peaceful lives in harmony with nature would automatically look to Christianity for the loving creator it provides. Okonkwo and those of his time worked to please their gods in order to survive. For example, there is an annual feast of offering to the goddess of the earth. The eldest, a man of course, would break kola nuts in order to give thanks to his ancestors before they went on to enjoy their own meal. In giving thanks to their ancestors the people would also pray and ask the gods to fulfill their prayers as Uchendu, Okonkwo’s uncle does, before the final feast he gives before he leaves his motherland to return to his own society in Umofia after seven years of exile. The oldest member of this extensive family was Okwonko’s uncle, Uchendu.

The kola nut was given to him to break, and he prayed to the ancestors. He asked them for health and children… he then broke the kola nut and threw one of the lobes on the ground for the ancestors. (p.165) It was necessary to offer a man’s best to the gods. In Christianity this same belief occurs as the priest sacrifices his offering of bread and wine to God in remembrance that there is a supreme ruler. In Christianity, followers are expected to support and tithe to their church, and ultimately their God. However, Christianity’s God is not a mysterious, untouchable being like the gods in Umofia. The Christian God is a father who rules absolutely, but with a loving touch, over his people.

He listens to their needs and answers their prayers if it the Will of His higher plan. He accepts all people unlike the villagers of Umofia who were told that it was the gods’ will to exile some people for their mistakes. Therefore, many younger villagers in search of love and safety, and those who returned from exile, were in favor of the new religion and so they followed the white missionaries. These missionaries were solely intending on converting the villagers so that they could organize them into a government and conquer the people quietly in the name of the Queen. Thus, it was the white missionaries who caused the fall of Umofia and not religion. Religion was just a tool they used to shake those who had already lost faith in their clan and their own personal worth within the clan. Therefore, when the missionaries took the faith that tied them to their clan, the faith in their gods, the villagers quickly gave up their possessions to follow this loving, accepting way of life that the clan had denied them. 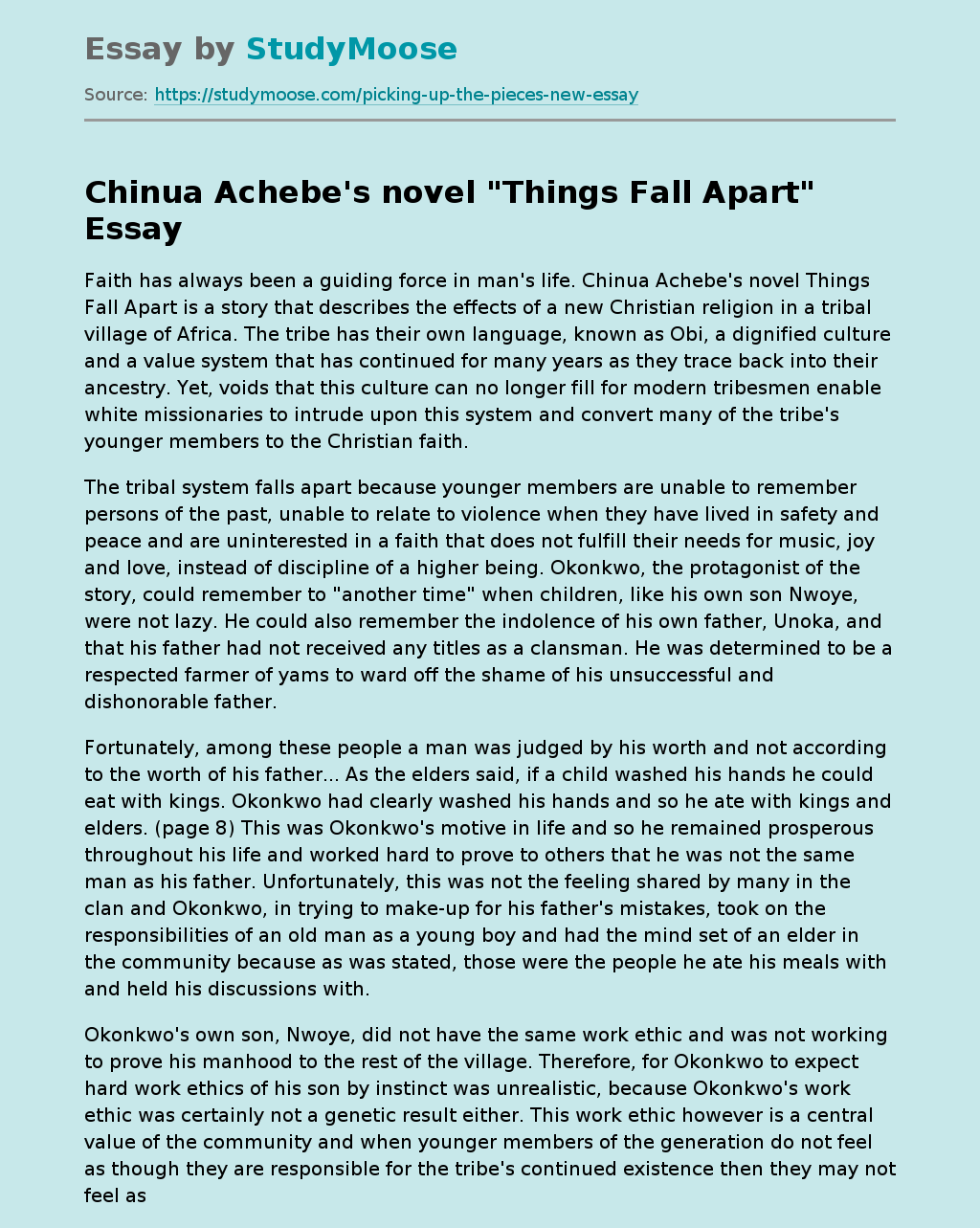