My clientele, the Alcoholic Anonymous group is comprised of members who have come together for the purposes of helping each other to stay sober and assist each other achieve sobriety. The members particularly share a common desire of stoping drinking and recovering from alcoholism. The clientele has largely remained anonymous and has adopted the 12 steps as one of the primary ways of promoting recovery from alcoholism among the members. Generallym, the meeting was part of the 12 step recovery program as it provided an opportunity for the members to learn about diverse coping mechanisms used by others to help them recover from the diverse challenges of alcohol addiction and remain sober (Room, 2015).

Don't use plagiarized sources. Get your custom essay on
“ Attending a local Alcoholics Anonymous Meeting ”
Get custom paper
NEW! smart matching with writer

The meeting of the Alcoholic Anonymous group which I attended was remarkably important in that it helped my clientele todiscover and adopt new skills for staying sober. The members were particularly meeting in order to learn about how each of their counterparts were coping with the diverse challenges of addition and find out new waysd of staying sober.

The meeting was remarkably helpful to the members many of whom had been steeped in substance abuse. For example, many members of the Alcoholic Anonymous group were able to share their experiences which inspired those who were new to addition recovery thereby enhancing their alcohol and substance abuse recovery process.

Generally, the meeting was voluntary with no obligations or intrusive questions. Although many of the new members had no idea of their expectations, This was critically important as it help drive hope the fact that alcoholism is a condition that can happen to anyone based on the stories told by the participants.

Additionally, the meeting was informal in nature and there discussions were mostly voluntary with no one being forced to share their experiences. The group divided themselves into smaller subgroups and each subgroup was given a specific topic to discuss. However, the meeting followed a precise format whereby the participants in the meeting shared their unique stories of alcoholism and then studied some texts related to addition recovery.

Using nursing knowledge during the local Alcoholics Anonymous meeting was critically effective. Generally, the nursing knowledge provided a basic understanding of the importance of the 12 steps employed in AA meetings. For example, nursing knowledge helped in highlighting the importance of the members and attendants admitting their powerlessness when it comes to controlling their use of alcohol. In addition, nursing knowledge also provides an important source of understanding of the diverse health challenges being faced by alcoholics. For example, heavy drinking is normally associated with a wide range of mental issues such as depression and anxiety which may complicate recovery based on the 12 steps of Alcoholic Anonymous.

In addition, some members and attendants of the local Alcoholics Anonymous meeting are also likely to be suffering from a wide range of nursing issues such as alcoholic fatty liver disease due to the effect of alcohol on their liver. Moreover, nursing knowledge also creates awareness of the problem of alcoholism among the attendants including the risk factors and symptoms of the problem of alcoholism. For example, it is likely that a significant majority of the members of Alcoholics Anonymous have been drinking alcohol to the point that it may result in diverse health problems associated with drinking.

Attending a local Alcoholics Anonymous Meeting. (2020, May 02). Retrieved from https://studymoose.com/attending-a-local-alcoholics-anonymous-meeting-essay 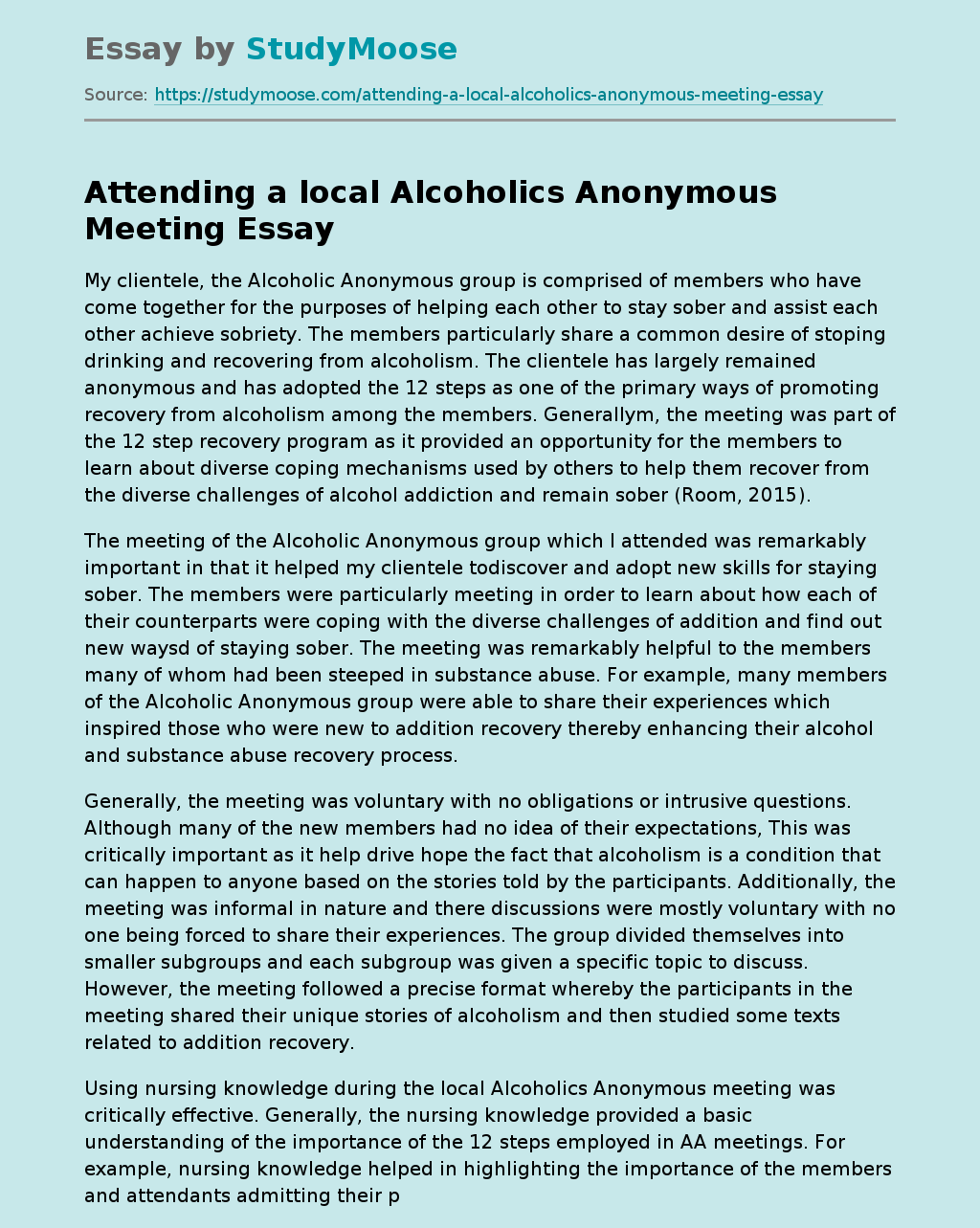