On August 6 1945 the first atomic bomb was dropped on Hiroshima and the second one was dropped at Nagasaki on 9th August 1945. The atomic bomb pelted on Japan was initially intended to force the Germans into submission but after the Germany surrendered, Japan was left as the threat to world peace. (John F. P. 56) The Hiroshima Bomb which was uranium based killed 100,000 Japanese and left several thousands dying slowing as a result of radiation.

After three days, another atomic bomb was dropped at Nagasaki city, which left around 50,000 dead (P.

Don't use plagiarized sources. Get your custom essay on
“ Atomic bombing of Hiroshima and Nagasaki ”
Get custom paper
NEW! smart matching with writer

M. S, Blackett 70) The justification for these mass killings was that it would end the war faster and thereby making it unnecessary to invade Japan. According to Byres, such an invasion could save a million people and therefore it was desirable. Was the atomic Bombing of Hiroshima and Nagasaki Genocide Yes indeed it was. My opinion is based on the following premises: First, by August 1945 the Japan military was in a desperate state.

The Naval blockade of the Allies had taken away a fleet of ships with military supplies and weapons from Japan military, without these the Japan Military was weak and could not survive for long. (Matin Z. ) According to a detailed opinion survey of the leaders of Japan who survived the atrocities, Japan would have inevitably surrendered probably before November 1945 without the threat of an atomic bomb or even without Russia threatening to join the war against Japan. (Gar Alperovitz, 34)

Yet the American leaders knew all this information that had been successfully deciphered from the code and messages sent by Japanese military.

The American leaders were well aware that Japanese authority had communicated to its Moscow ambassador to start negations for ending the war with the allies and the all-powerful Japanese emptor had indicated intentions of considering peace settlement by June 1945. Even after the American intelligence informed this message to president Truman, he did not change his mind about launching a bomb attack on Japan. (Gar Alperovitz, 37)

After all the Japanese had only one condition for them to surrender; that is the Emperor who was a holy symbol to the Japanese should remain in power even after the end of the war. This was a small condition for America to sacrifice against the lives and property that lay at stake if a bomb was launched on Japan. (Gar Alperovitz, 38) The statement by President Truman that the world should note that the first bomb was launched on Hiroshima Military base to avoid the killings of civilian was sarcastic since all most all of those killed in the bombings of the two cities were civilian, according to a report by U. S strategic Bombing survey.

Both innocent children and women were killed rather than the military personnel, which amounts to the infringement against human rights and a genocide of the highest order. (M. Susan Lindee 13) The destruction of the two cities is condemned not only by Japanese and other outsiders but by high rank military and conservative leaders from America itself as well. Former president Herbert Hoover himself wrote that the indiscriminate killing of young children and women “revolted his soul”. Former President Eisenhower had even advised the secretary of war against using an atomic bomb on Japan during a certain meeting.

These and many more leaders as well as civilian Americans have continued to criticize the action taken by General Grove and are on the view that that the military attack was unnecessary and exaggerated. (Matin Z. ) An ambitious and domineering Admiral Purnell who suggested that it would take two bombs to coerce the Japanese to surrender by and large carried out the idea of a second atomic bomb being dropped on Nagasaki. Grove was well aware that two atomic bombs were in the making and saw good opportunity to actualize his own schemes.

The decision to drop a second bomb at Nagasaki was not even made in Washington but it was made on Tinian Island. Grove was in an unusual hurry to make sure that the second atomic bomb was dropped before anybody else could decide otherwise. http://www. dannen. com/decision/handy. html Moreover, the second bomb primary target was Kokura but when the attack plane arrived there, the city was covered by a mass of cloud. Instead of the pilot turning back, and aborting the mission, they still went ahead and decided to attack Nagasaki, a town that was highly populated with civilians. http://www. dannen.

com/decision/handy. html There are also well-supported views that Hiroshima bombing was a test. The bomb dropped there had been uranium, which had never been tested before. It was quite inhuman and high level of barbarism that the test was to be done at the expense of many lives. (Matin Z. ) American planes also distributed thousands of leaflets alerting the Japanese that unless they surrendered unconditionally the towns of Akita, Fukushima, Urawa, Iwakumi, Yawata Miyakorojo, Otaru, Imabaru and Saga,would be attacked by bombs. However these leaflets did not mention Hiroshima, Nagasaki, Nugata and Kokura.

(Matin Z) So it is clearly evident that the American leaders who were responsible for attack did not intend to forewarn the civilians so that they could evacuate before the time of attack. The killings that resulted are not only high abuse of human rights against innocent civilians but also a cowardly act against a subdued enemy. (Matin Z. ) Both innocent women and children were not spared by this obliteration of Hiroshima and Nagasaki. (M. Susan Lindee 13). In fact the Manhattan scientists who were working on the bomb were shocked when they were later informed that Japan had always been the target and not a deterrent to the German invasion.

(M. Susan Lindee 13) The Military policy committee chaired by General Grove realized that Japan was a more convenient target for the bomb than Germany. This means that the bombing of Japan was not so much as a result of their aggressive activities but because they were convenient targets of testing some newly acquired weapons! (Martin J. S. 234) Furthermore Americans wanted to take control of Japan before Russia could control it. The Russians leaders had planned to invade Japan on 8 August 1945.

So the coincidental bombing of Hiroshima two days before the planned date when Russia intended to invade Japan was suspicious. There is a wide specification that America attacked Japan to gain its control before Russia could achieve the same. However the intention of the second bomb that was pelted on Nagasaki is not very clear. (Matin Z. ) However President Truman cannot be blamed so much for the bomb attack on the two cities when he took over in April 12, 1945 after Roosevelt’s death, General Grove made it appear to President Truman as if Japan was always the Target for the bombs. http://www.

dannen. com/decision/hst-jl25. html Grove was reluctant to discuss about the Manhattan Project with the chief of staff since he knew that he was opposed to the bombing of Japan. The General Marshal was of the view that the bomb could be used against military targets such as Naval establishments but not on cities. However General Grove overlooked all these well meaning advices to fulfill his self interest at the cost of hundred thousands of Japanese lives and a lot of property. (Matin Z. ) Conclusion The past cannot be erased but can serve as invaluable lesson and prepare us for the future.

Even though the bombing of Hiroshima and Nagasaki speeded up Japans decision to stop the war, it was not the major consideration that the Japanese leaders used. Therefore the use of the atomic bomb was excessive act since other strategies could have worked to coerce Japan to stop the war. After all, the Japanese were ready to surrender on condition that their emperor would still remain in authority. The bombings of Japan cities were not only immoral but they were a crime and genocide to the full extent.

Atomic bombing of Hiroshima and Nagasaki. (2017, Mar 17). Retrieved from https://studymoose.com/atomic-bombing-of-hiroshima-and-nagasaki-essay 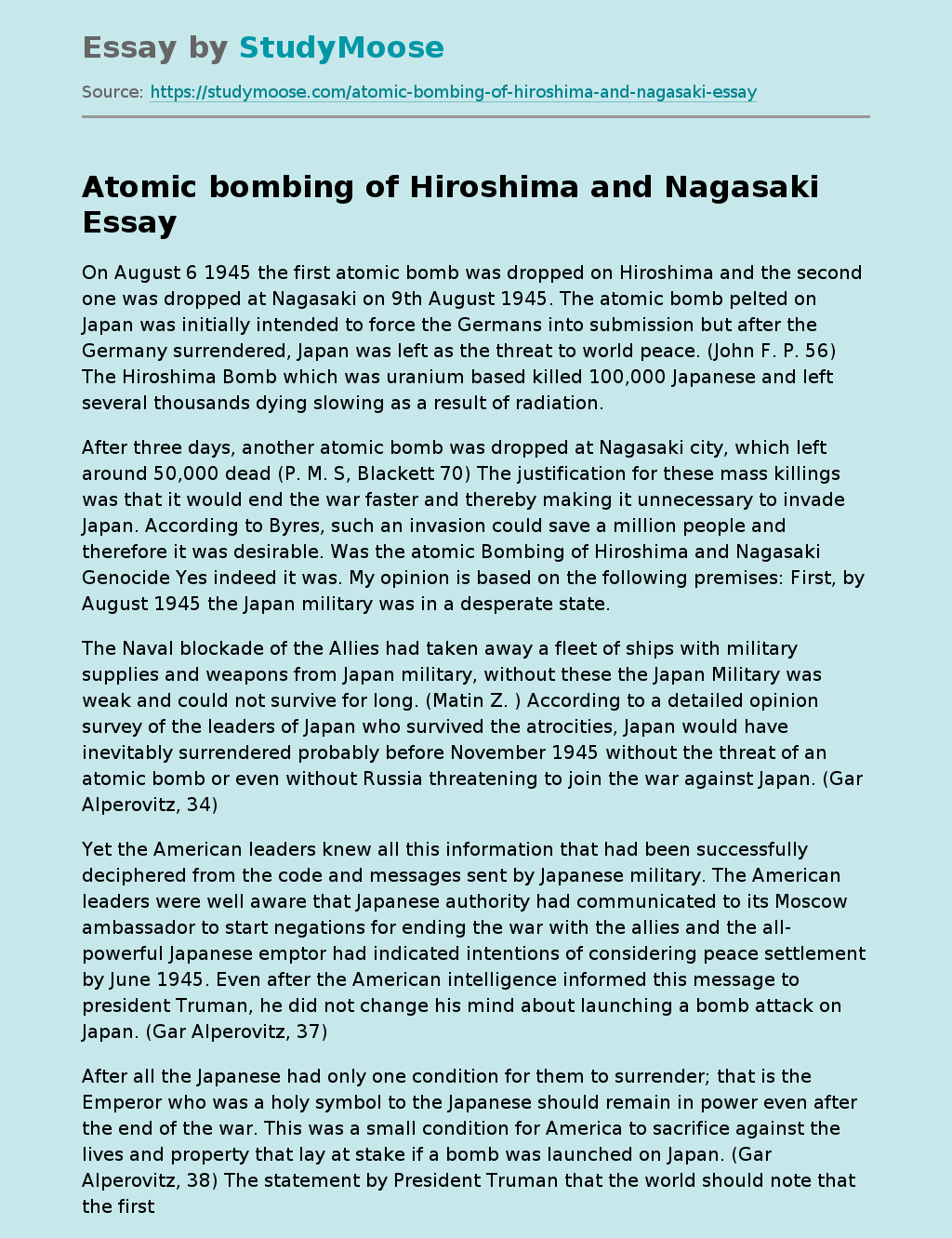