At roughly around noon, soldiers came to pick up Lincoln and give him a proper burial. They wrap him up in an american flag and set him into a plain white box, Lincoln was a man of simple tastes, this is how he would have liked it. They set him into the carriage and it heads back to the white house. The nest day, Johnson was sworn in as president in his hotel room. In New York, John Surratt heard that Booth had killed Lincoln.

Don't use plagiarized sources. Get your custom essay on
“ At roughly around noon soldiers came to pick up Lincoln and give ”
Get custom paper
NEW! smart matching with writer

Worried that his name might be connected to Booth’s, John flees to Canada. He then flees to Europe, where in Rome, Italy he serves in the pope’s army and escapes capture for a year. Stanton knew he needed to catch Booth before he vanished into the deep south.

On the Mudd farm, Booth stays in bed while Mudd and Herold go into Bryantown. In Bryantown, the Union cavalry, or manunters, are riding through the town.

Mudd asks what going on and they say that John Wilkes Booth has killed the president. Mudd calmy rides back to his farm where he orders Booth to leave at once. Since he felt sorry for him, and he didn’t like Lincoln that much, he gave Booth the name of someone they should head to next, Captain Samuel Cox. Mudd says that he will point the manhunters in the wrong direction if they leave immediately. With that, Booth and Herold got onto their horses and rode down south.

At the Cox farm, Booth persuades him to help them. Cox tells them that they will stay in the Pine thicket behind his house, the manhunters wouldn’t look there, and shoot anyone who enters but doesn’t whistle a three note code. Early next morning, Cox sends his son to send for Thomas Jones, and ex-confederate secret service, to help Booth and Herold cross the Potomac river. Booth and Herold meet Thomas Jones who comes up with a plan. When the Union rides past, they will sneak out onto a boat and Booth and Herold will paddle into Virginia. Jones agrees to bring food, water and a newspaper everyday until Booth and Herold leave, and with that, Jones leaves. Early morning the nest day Jones brings some coffee, bread, and the newspaper. He joins Booth and gives him the paper. Booth is delighted by how the nation is reacting. In late afternoon, when Jones is about to leave after giving Booth and Herold dinner. They hear the clanging of horseshoes and sabres. It’s the union cavalry! Booth, Herold, and Jones lie in the pine thicket, staying completely still so they don’t blow their cover. They leave without even looking for Booth. Later that night, Jones sneaks Booth and Herold out onto a boat, and gives them directions on where to go. After a whole day, since they accidentally travelled west into a northern part of Maryland, then reached Virginia on their second attempt.

At roughly around noon soldiers came to pick up Lincoln and give. (2019, Dec 03). Retrieved from https://studymoose.com/at-roughly-around-noon-soldiers-came-to-pick-up-lincoln-and-give-example-essay 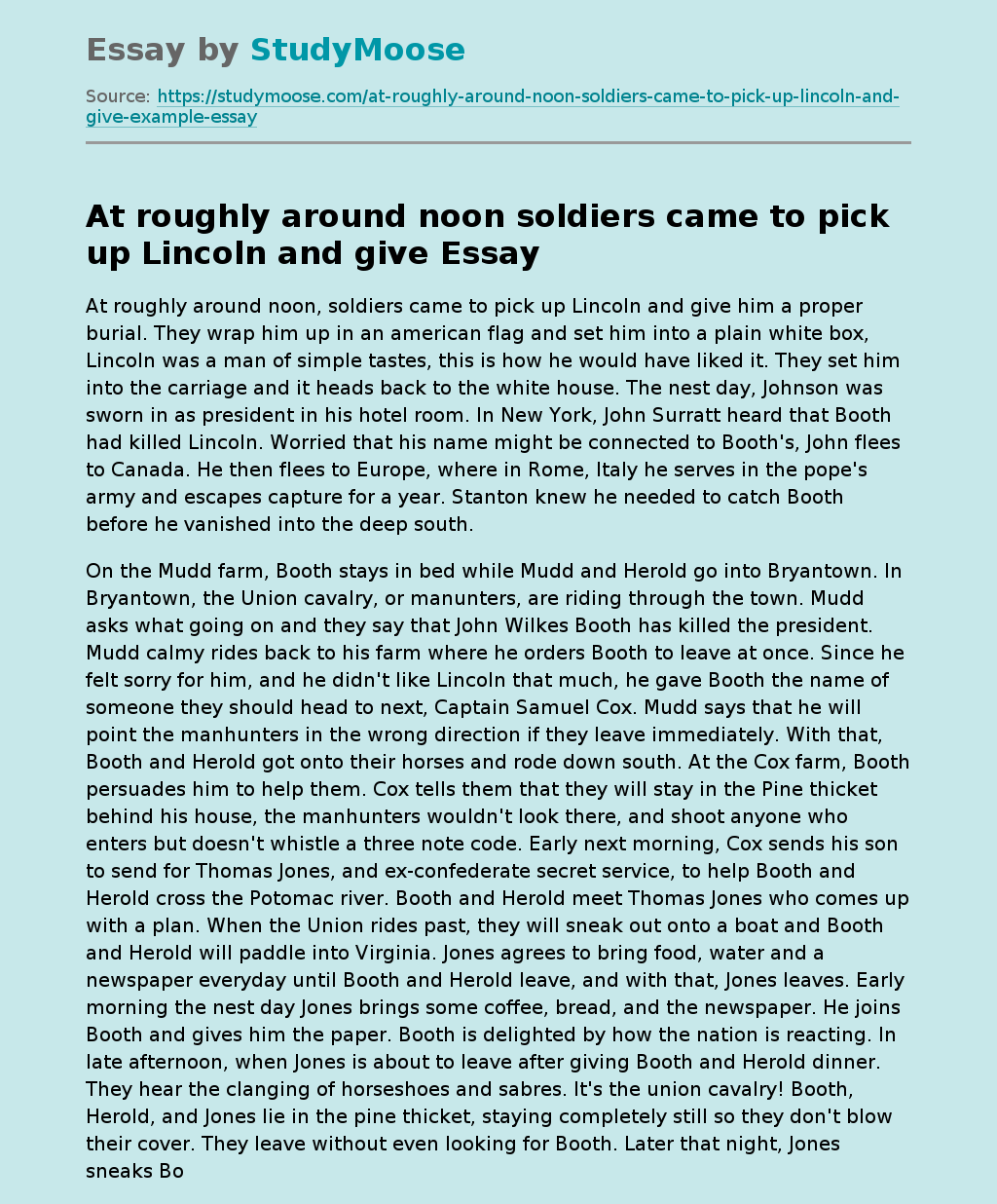