Bilingualism is the ability to speak two languages. Bilingual Education is being taught school subjects in two different languages. The United States is home to millions of immigrants each with their own native backgrounds. The United States require the immigrants to learn the full English languages when settling into the country. The schools should give the opportunity to bilingual students, or new student immigrants the advantage to learn the English language or to be taught in two different languages.

This would give the students the advantage in learning two different languages that will help them in the future.

Don't use plagiarized sources. Get your custom essay on
“ Argumentative Essay on Bilingual Education ”
Get custom paper
NEW! smart matching with writer

The United States is a country mixed with different native backgrounds and ethnicties; it is always undergoing assimilation of some sort. It is like a “salad bowl” where not everyone assimilates together but is mixed together. American has a common language and that is English, but American should also not force English only on immigrants or citizens, however, they should teach the new immigrants the English language and still allow them their own native languages. The United States should not single out the immigrants by now allowing them to speak their native language in public and only speak the English language.

Another reason for Bilingualism in the United States is Bilingual Education. Bilingual Education is the learning of school subjects in two languages, the “use” and “knowing” of two different languages. The United States should have certain schools throughout the country that offer bilingual classes. The students should have the chose to learn another language or to be taught English while in the mean time they still are able to learn in the native language until the learn the full English language. See more argumentative essay samples.

As the students learn another language they become knowledgeable in the writing, reading, speaking and comprehension of that language. Students in the fourth grade who are Spanish speaking natives have learned the English languages are studied on their knowledge of the two languages. The gathered stories from their families in Spanish and were to rewrite the story in English. The study shows that by having children become bilingual in two languages gave them better opportunities in life and broaden their skills in the classroom and in the social and cultural world.

They should have the advantage to learn the subjects in two different languages so that they will have a better understanding of the subjects. After a year or two at least the students should be ready to be placed in a normal English only classroom and be able to do well. It must be a transition for the students as they are prepared for the transfer into a standard English classroom. Many student immigrants have made the transition for their own native language to the English language and become better assimilated with the country.

They believe that their children being bilingual will give them many advantages, as helping the children in the classroom or leading their children to a high career opportunity. The children are able to speak their native language at their home, but as they speak English at home they are helping their parents also learn the language. When the children know the English language it helps them be able to communicate easier with the rest of the country. Bilingual Education and Bilingualism is not something that can affect the United States in a harmful way.

The United States is a free country allowing all immigrants from all diversities come into this country. America should require the new immigrants to learn the full English language so that they are able to communicate with the rest of the country and able to get jobs. Schools should give the immigrant students who are not fluent in English the opportunity to learn English and school subjects in their native languages in a separate classroom, until they are fluent enough to keep up with the teacher and the material they are taught in a standard English classroom.

If America allows Bilingualism and Bilingual Education then it will give the immigrants a chance at learning English to live in the country comfortably, go to school in English classrooms and work in English jobs. They are still allowed to speak their own native languages in the public and in the privacy of their own home. Bilingualism should not be forced on anyone. It should be a transitional act to help them transform more into the United States. 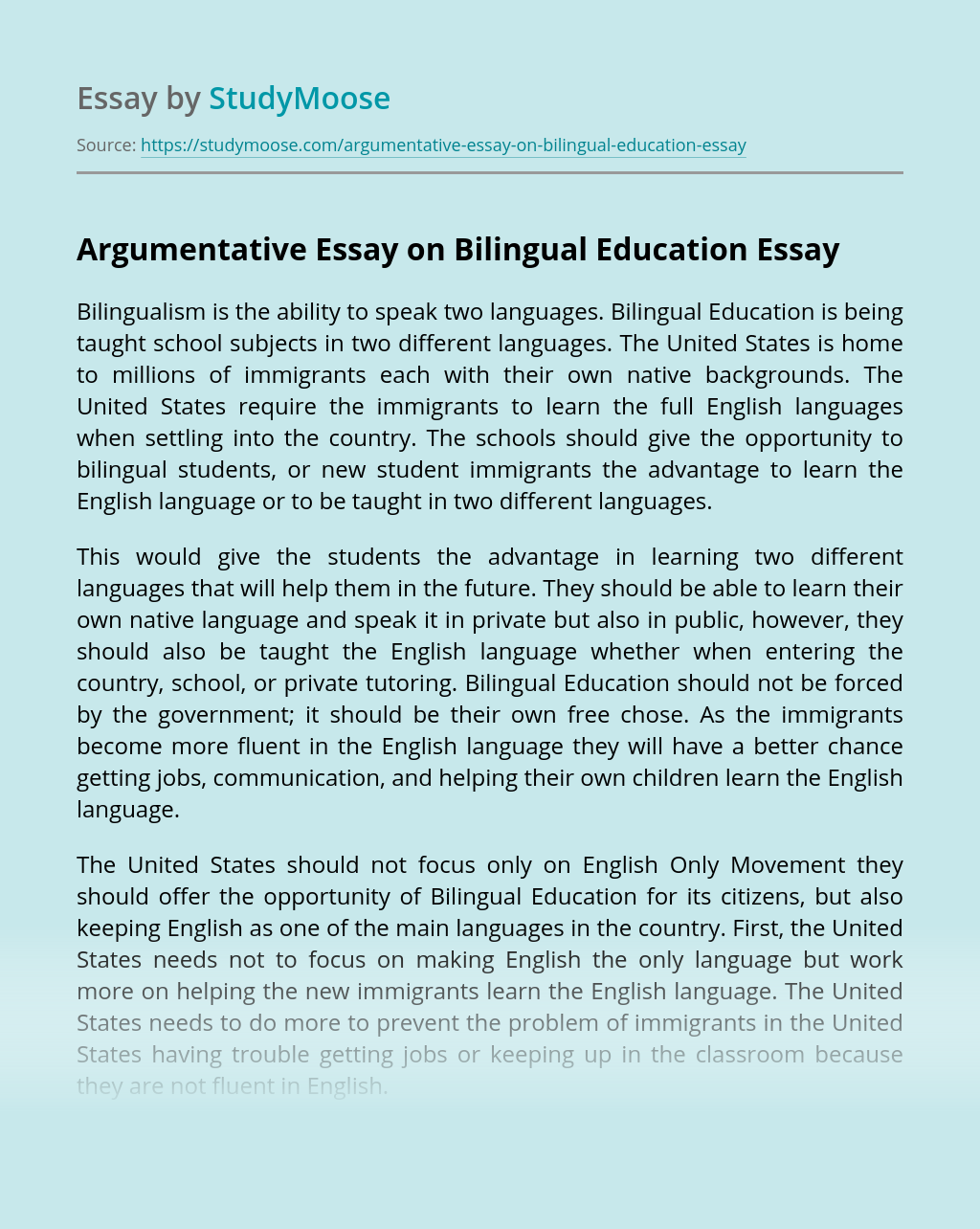