Architecture of the Uae

The Architecture of the United Arab Emirates: http://victorian. fortunecity. com/dali/428/uaearch/uaearch1. htm Part 1: Introduction Economic prosperity and socio-cultural changes in the UAE During the last few decades, enormous economic and socio-cultural changes have occurred in the Gulf area at an extremely rapid pace. These changes were produced by the discovery of oil in the region and the economic wealth that resulted.

This economic prosperity has had great impact on architecture and the built environment. Architecture before and after oil wealth Before the discovery of oil, the inhabitants of the Gulf region lived a simple and traditional lifestyle.

Don't use plagiarized sources. Get your custom essay on
“ Architecture of the Uae ”
Get custom paper
NEW! smart matching with writer

The inhabitants depended on date crops and sheep herding as their main sources of income. Traditional architecture found in the region reflected their social and cultural values. It responded to the harsh natural environment with innovative solutions suitable for the mostly hot-arid weather conditions.

After the discovery of oil in the Sixties, economic prosperity allowed rapid change in the social and cultural values of the society.

The UAE, as many other Third World countries, was eager to follow the Western model of modernization and development. As a consequence, the urban environment was changed to meet the new ambitions. Modern buildings replaced traditional architecture and the traditional lifestyle of the inhabitants was transformed to a modern one. The new economic wealth encouraged the use of modern construction systems and materials.

The introduction of new architectural styles in the region was made by foreign as well as local architects. Air-conditioning units became available in all buildings replacing the traditional wind catchers.

Concrete, steel, glass, and other modern building materials were introduced by the construction industry. Shiny glass skyscrapers, reflecting the burning sun, have changed — forever — the urban landscape of Gulf cities. Architecture and the built-environment reflect political, economic, social, and cultural aspects of the society.

It is now possible to use energy to modify climatic conditions and produce built forms that disregard local climate, but there is a price to pay- indeed often several different prices. Architecture in the Gulf region reflects many social and cultural aspects of the society. While traditional architecture reflects the simple and traditional way of life, modern architecture reflects the economic wealth and new socio-cultural values. The economic wealth facilitates the use of advanced construction materials and building systems. Air-conditioned and glass covered buildings are considered symbols of modernity and civilization.

Traditional buildings are considered images of the poor and undesirable past. While some observers praise these changes as “a step in the right direction” to modernity and development, others are concerned about this rapid change and the social and cultural prices of achieving it. New awareness The beginning of the Nineties witnessed a new awareness of the importance of traditional and cultural values. The break away from past cultural values during the Seventies had transformed the society very rapidly. The rapid change disrupted the cultural continuity between the old and new generation.

His Highness Sheikh Zayed Bin Sultan Al Naheyan stressed the importance of recognizing the present and the future as a continuation of the past. This awareness reflected realization on all levels of society that a complete submission to modern cultural values affected many aspects of society in undesirable ways. This awareness generated new attitudes towards architecture. Many deserted old buildings were renovated and transformed into museums and other cultural functions. New buildings were built using features from traditional architecture.

A trend to go back to the roots and enforce the ties with history was established. Economic prosperity and architecture All these changes had an impact on architecture. New buildings and houses were constructed using advanced construction and finishing materials imported from abroad imitating the style of architecture found in other parts of the world. New building types, such as office buildings, shopping malls, hospitals, schools, and hotels were built. The construction industry was booming because of easily acquired loans and guarantees provided for the citizens.

All types of buildings with numerous styles appeared in the urban landscape. People abandoned the countryside and migrated to cities in an effort to achieve a stable monthly income and better living conditions. Contemporary Architecture in the UAE After the discovery of oil and the economic prosperity enjoyed by the country, there was an urgent need to build new buildings to meet the new demands of the people. Planning departments were established to work on planning cities and villages of the country. Municipalities and Departments of public works focused on building public buildings and housing developments.

It is not only a nostalgia for the past but also a concern for the future. Many critics are concerned with cultural continuity and the loss of cultural identity. Conferences and seminars are held to discuss issues related to the preservation of architectural heritage. Viewpoints of traditional architecture There are four major viewpoints held by architects toward traditional architecture and its relevance to contemporary architecture: • Complete rejection of its relevance to our time. Traditional buildings were products of certain historical, social, cultural, and economic circumstances.

There is a loss of identity in architecture and the built environment which are produced to satisfy technological advancement and profit making purposes. Some efforts are being made to produce architecture related to the area and needs of the society. Western ideas of architecture are being imported to satisfy desired images of progress and development. There is a danger in applying Western concepts, which represent only one choice among the many possible, to the problems of other areas, instead of looking at them in terms of the local way of life, specific needs, and ways of doing things.

Air-conditioned, glass covered buildings and architecture styles borrowed from other parts of the world are used by architects in the design of new buildings. The use of latest construction technology and materials is unchallenged. This trend results in architecture that has no identity or relation to the context in which it is being built. The issues of identity and heritage should be stressed. This is important because the impact of what is built is not only limited to the living generations but also to the uture generations of this country. Architecture must relate to the needs of society- dynamic and confident architecture being produced by dynamic and confident societies, whereas uncertain or decadent societies have their characteristics in what they build. Now that we have the wealth, technology, means of communication and transportation to build almost anything almost anywhere- not an entirely beneficial state of affairs- perhaps the major challenge facing architecture at the turn of the century is one of identity.

The enormous pressures to build, and the inappropriate cultural and social images being transmitted from the West, are occurring at a time when Third World countries are struggling to redefine and reestablish their national identities after long periods of foreign domination, and in some instances, lingering hegemony. The architectural acid rain fallout from First World design games and their attendant technology is the last thing these countries need. Identity should not be imposed on architecture, rather identity should be a natural product of consciousness and deliberate search.

Architecture reflects the time and the way of thinking of a society. The Future of Architecture in the UAE There is a growing public consciousness of the impact of the rapid social and cultural change on architecture. Evident is the break of cultural continuity between old and new architecture. Also, the loss of identity in the built environment is experienced in all major cities of the UAE. Architecture should reflect meaningfully all aspects of the society’s past-present-future. There is a need to introduce architecture that respects the environment, the people, and reflect the identity of the place.

What to do The architectural heritage of the country suffered many losses and degradation during the last twenty years. Preservation of architectural heritage is very critical especially that the remaining buildings deteriorating rapidly. It is not sufficient to preserve isolated buildings. The urban patterns should be preserved for future generations to appreciate. Very few areas still retain the urban pattern of the past; i. e. Bastakia and Old Souq in Dubai. A meaningful use of historical elements should be stressed in new buildings.

The origins and uses of these elements should be studied and careful selection should be made by governmental committees concerned with the preservation of the architectural heritage. Building regulations and planning require major revisions. They were introduced to the country amidst all this social and cultural change. An exhaustive review of their impact on the built environment should indicate areas for improvement and correct past mistakes. Change is inevitable. Every society and culture experiences change everyday.

Architecture of the Uae. (2018, Oct 31). Retrieved from https://studymoose.com/architecture-of-the-uae-essay 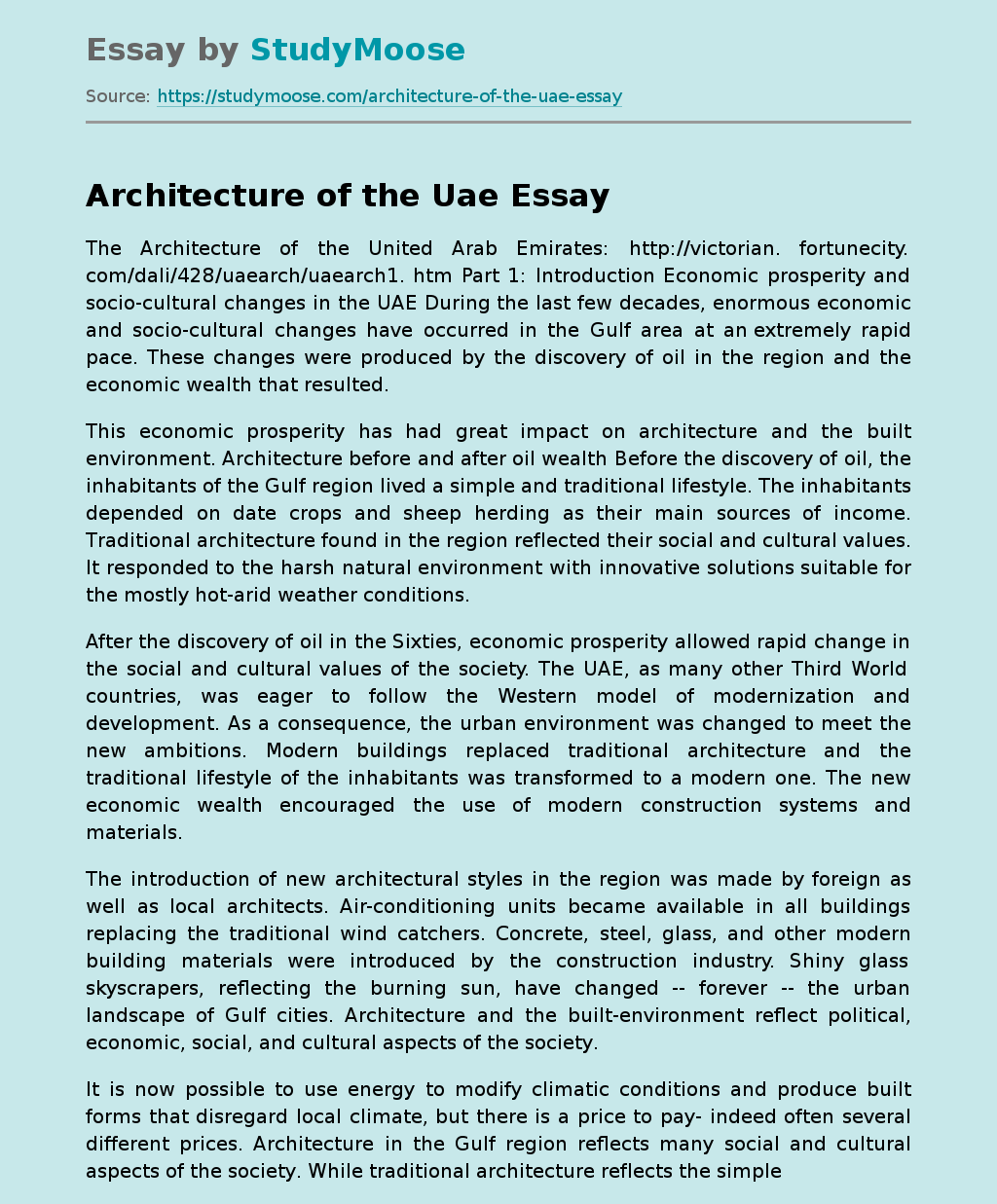