This paper demonstrates that the traditional categorization of innovation as either incremental or radical is incomplete and potentially misleading and does not account for the sometimes disastrous effects on industry incumbents of seemingly minor improvements in technological products. We examine such innovations more closely and, distinguishing between the components of a product and the ways they are integrated into the system that is the product “architecture,” define them as innovations that change the architecture of a product without changing its components.

The distinction between refining and improving an existing design and introducing a new concept that departs in a significant way from past practice is one of the centra! notions in the existing literature on technical innovation (Mansfield, 1968; Moch and Morse, 1977; Freeman, 1982). Incremental innovation introduces relatively minor changes to the existing product, exploits the potential of the established design, and often reinforces the dominance of established firms {Nelson and Winter, 1982; Ettlie, Bridges, and O’Keefe, 1984; Dewar and Dutton, 1986; Tushman and Anderson, 1986). Although it draws from no dramatically new science, it often calls for considerable skill and ingenuity and, over time, has very significant economic consequences (Hollander, 1965).

Radical innovation, in contrast, is based on a different set of engineering and scientific principles and often opens up whole new markets and potential applications (Dess and Beard, 1984; Ettlie, Bridges, and O’Keefe, 1984; Dewar and Dutton, 1986).

Radical innovation often creates great difficulties for established firms (Cooper and Schendet, 1976; Daft. 1982; Rothweli, 1986; Tushman and Anderson, 1986) and can be the basis for the successful entry of new firms or even the redefinition of an industry. Radical and incremental innovations have such different competitive consequences because they require quite different organizational capabilities. Organizational capabilities are difficult to create and costly to adjust (Nelson and Winter, 1982; Hannan and Freeman, 1984). incremental innovation reinforces the capabilities of established organizations, while radical innovation forces them to ask a new set of questions, to draw on new technical and commercial skills, and to employ new problem-solving approaches (Bums and Stalker, 1966; Hage, 1980; Ettlie, Bridges, and O’Keefe, 1984; Tushman and Anderson, 1986). 9/Administrative Science Quarterly, 35 (1990): 9-

This research was supported by the Division of Research. Harvard Business School. Their support is gratefully acknowledged. We would like to thank Dataquest and VLSI Research Inc for generous permisston to use their published data, the staffs at Canon, GCA, Nikon, Perkin Elmer and Ultratech. and ail those individuals involved with photolithograr^ic alignment technology who gave so generously of their time. We woukj also like to thank the editors of this joumal and Hiree anonymous reviewers who gave us many helpful comments. Any errors or omissions remain entirely our respons^tity.

The distinction between radical and incremental innovation has produced i r r ^ r t a n t insights, but it is fundamentally incomplete. There is grovwng evidence that there are numerous technical innovations that involve apparently modest changes to the existing technology but that have quite dramatic competitive consequences (Clark, 1987). The case of Xerox and small copiers and the case of RCA and the American radio receiver market are two examples. Xerox, the pioneer of plain-paper copiers, was confronted in the mid-1970s with competitors offering copiers that were much smaller and more reliable than the traditional product. The new products required little new scientific or engineering knowledge, but despite the fact that Xerox had invented the core technologies and had enormous experience in the industry, it took the company almost eight years of missteps and false starts to introduce a competitive product into the market.

In that time Xerox lost half of its market share and suffered serious financial problems (Clark, 1987). In the mid-1950s engineers at RCA’s corporate research and developnr>ent center developed a prototype of a portable, transistorized radio receiver. The new product used technology in which RCA was accomplished (transistors, radio circuits, speakers, tuning devices), but RCA saw little reason to pursue such an apparently inferior technology. In contrast, Sony, a small, relatively new company, used the small transistorized radio to gain entry into the U.S. market. Even after Sony’s success was apparent, RCA remained a follower in the market as Sony introduced successive models with improved sound quality and FM capability. The irony of the situation was not tost on the R&D engineers: for many years Sony’s radios were produced with technology licensed from RCA, yet RCA had great difficulty matching Sony’s product in the marketplace (Clark, 1987).

Existing models that rely on the simple distinction between radical and incremental innovation provide little insight into the reasons why such apparently minor or straightforward innovations should have such consequences. In this paper, we develop and apply a model that grew out of research in the automotive, machine tool, and ceramics industries that helps to explain how minor innovations can have great competitive consequences. CONCEPTUAL FRAMEWORK Component and Architectural Knowledge

In this paper, we focus on the problem of product development, taking as the unit of analysis a manufactured product sold to an end user and designed, engineered, and manufactured by a single product-development organization. We define innovations that change the way in which the components of a product are linked together, while leaving the core design concepts (and thus the basic knowledge underlying the components) untouched, as “architectural” innovation.^ This is the kind of innovation that confronted Xerox and RCA. It destroys the usefulness of a firm’s architectural knowledge but preserves the usefulness of its knowledge about the product’s components. IQ/ASa March 199D

This distinction between the product as a whole—the system—and the product in its parts—the components— has a long history in the design Jiterature (Marples, 1961; Alexander, 1964). For example, a room fan’s major components include the blade, the motor that drives it, the blade guard, the control system, and the mechanical housing. The overall architecture of the product lays out how the components will work together. Taken together, a fan’s architecture and its components create a system for moving air in a room. A component is defined here as a physically distinct portion of the product that embodies a core design concept (Clark, 1985) and performs a well-defined function. In the tan, a particular motor is a component of the design that delivers power to turn the fan.

There are several design concepts one could use to deliver power. The choice of one of them—the decision to use an electric motor, for example, establishes a core concept of the design. The actual component—the electric motor—is then a physical implementation of this design concept. The distinction between the product as a system and the product as a set of components underscores the idea that successful product development requires two types of knowledge. First, it requires component knowledge, or knowledge about each of the core design concepts and the way in which they are implemented in a particular component. Second, it requires architectural knowledge or knowledge about the ways in which the components are integrated and linked together into a coherent whole. The distinction between architectural and component knowledge, or between the components themselves and the links between them, is a source of insight into the ways in which innovations differ from each other.

Types of Technological Change The notion that there are different kinds of innovation, with different competitive effects, has been an important theme in the literature on technological innovation since Schumpeter (1942). Following Schumpeter’s emphasis on creative destruction, the literature has characterized different kinds of innovations in terms of their impact on the established capabilities of the firm. This idea is used in Figure 1, which classifies innovations along two dimensions. The horizontal dimension captures an innovation’s impact on components, while the vertical captures its impact on the linkages between components.

* There are, of course, other ways to characterize different kinds of innovation. But given the focus here on innovation and the development of new products, the framework outlined in Figure 1 is useful because it focuses on the impact of an innovation on the usefulness of the existing architectural and component knowledge of the fimn. Framed in this way. radical and incremental innovation are extreme points along both dimensions. Radical innovation establishes a new dominant design and, hence, a new set of core design concepts embodied in components that are linked together in a new architecture. Incremental innovation refines and extends an established design. 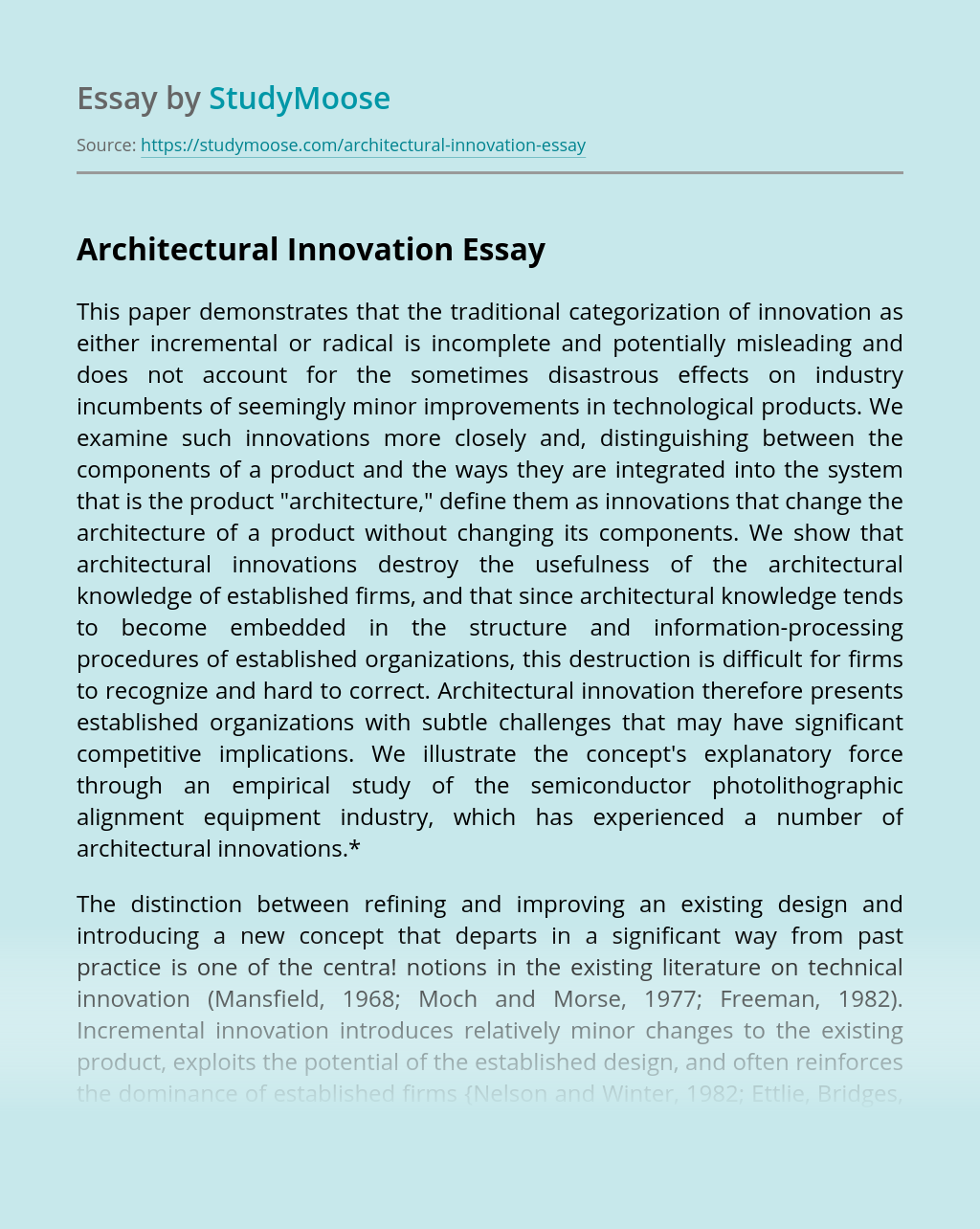