Heart of Darkness by Joseph Conrad, published in 1902 is a story about a steamer journey up the Congo River and also into the darkest reaches of the human psyche. This novella has been appropriated to the “ground-breaking masterpiece”1 ‘Apocalypse Now’ directed by Francis Ford Coppola and released in 1979 in which a soldier must journey into the war-stricken Vietnam to execute a soldier gone insane. These two texts, although belonging to different genres, carry the common themes of darkness and imperialism.

This report shall show how the differing contexts of these texts have influenced the themes, and also how the authors have used relevant techniques to show this.

Don't use plagiarized sources. Get your custom essay on
“ Apocalypse Now Appropriation of Heart of Darkness ”
Get custom paper
NEW! smart matching with writer

Context Heart of Darkness Heart of Darkness was set in a period during the colonial era when many European countries were laying claim to sections of Africa. An area known as the Belgium Congo was drawing serious international scrutiny over the outrageous treatment of many natives. King Leopold II of Belgium was a merciless ruler, not caring about the welfare of the natives.

Leopold drained the Congo of any resource of value. In particular, natural rubber had become a valuable commodity. Leopold enslaved the natives, using murder and mutilation as punishment for those villagers who did not supply their quota of rubber. Heads and hands were cut off and women held hostage were brutalised and raped. Joseph Conrad in his life had been victim to a brutal regime. His father was a revolutionist fighting for Poland’s freedom from the Russians. Joseph was raised in a place of hard and cruel conditions, and watched the deterioration of his mother to tuberculosis.

Yet at the same time he wholeheartedly embraced the English culture and language, becoming a master writer of the English language. There is no doubt that the early years of Conrad’s life would have affected his views towards colonialism. Yet, Conrad would have been influenced by the racisms of the 19th century. Conrad wrote in a first hand account about the first time he saw a black man: “[An] enormous buck nigger encountered in Haiti fixed my conception of blind, furious, unreasoning rage.

“2 Chinua Achebe believes this shows Conrad’s antipathy to black people, no doubt a factor that would affect Conrad’s writing. The state of colonialism in the Congo, along with Joseph Conrad’s upbringing and views on racism are no doubt influencing factors on the themes of the novel. All this has come together when Conrad became sailor on the Congo River. It was on the Congo River that Conrad wrote about his experiences, yet hated the Congo in the end as he had fallen victim to severe illness. With these factors, Heart of Darkness started to emerge. Apocalypse Now

‘Apocalypse Now’ is set approximately 70 years after Heart of Darkness, and even though the contexts differ the themes are very similar. The film is set in Vietnam during the Vietnam War of 1959-75. It is Vietnam’s history that influences this war. During the events of Heart of Darkness, Vietnam was colonised by the French, yet by 1949, Vietnam was looking for independence. The communist Vietnamese of the north fought a war with the French that lasted to 1954 until the defeat of the French. After this defeat, America intervened in Vietnam’s affairs to stop the spread of communism by establishing democracy in the south.

This was followed by the Vietnam War between the south and north, the south supported by the US, and the north by China. The Vietnam War drew large amounts of criticism from the international community. Journalists, whose articles were not censored, brought horrific images of the war back to the American citizens. One such image was that of a Vietnamese girl running through the streets of her village covered in napalm that had burned her skin off. It is these horrifying images of the Vietnam War that Coppola reproduces in ‘Apocalypse Now’. 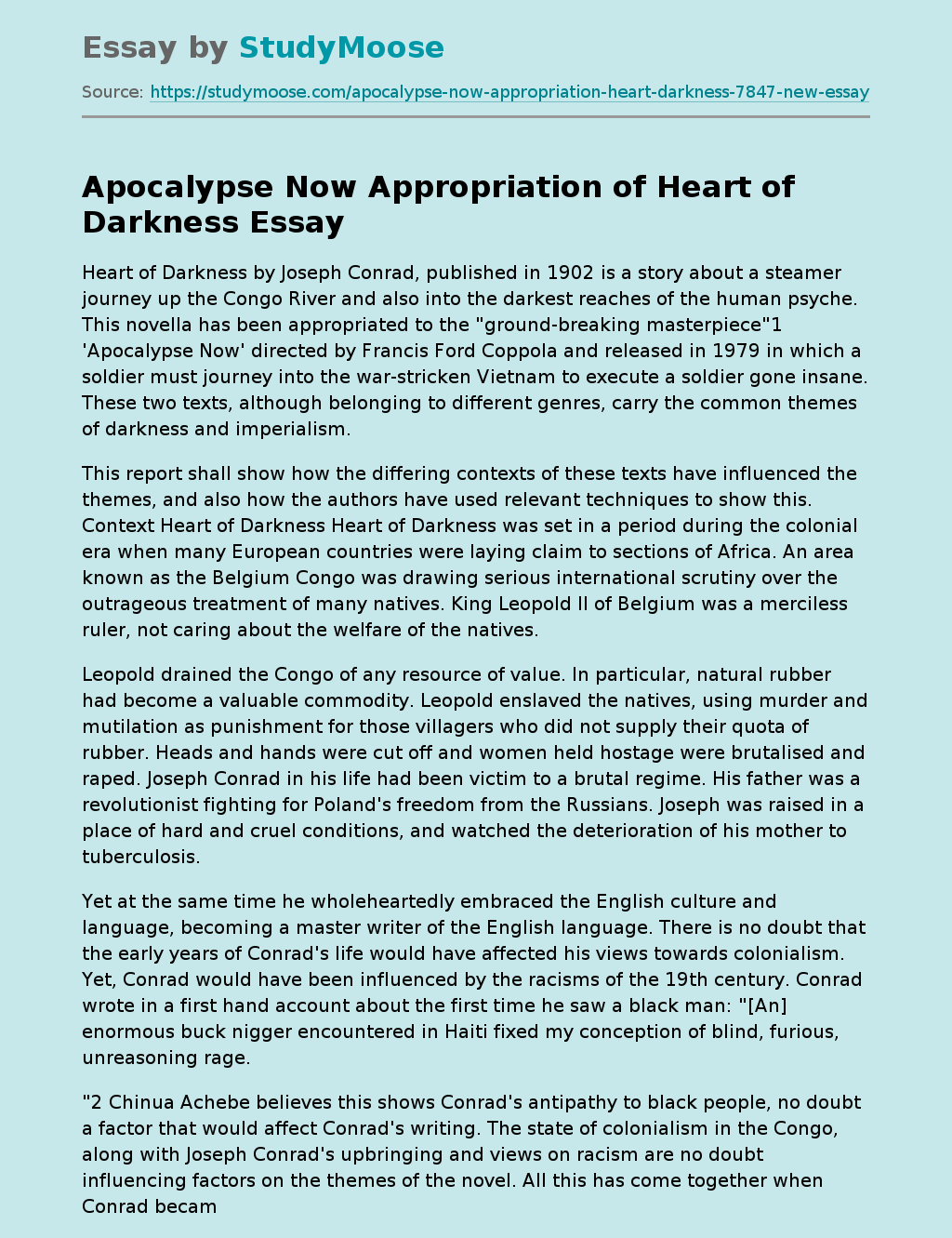