When she is not working as the UN Goodwill Ambassador, she’ll be acting or directing another film, or looking after her six cute kids. Today I will be speaking about the fantastic Angelina Jolie, my inspiration in many elements of life and a genuinely amazing woman. I will cover three primary locations with concerns to her life and accomplishments. My first point will be about her profession and family.

Second, I will be discussing her involvement in different around the world humanitarian activities.

Don't use plagiarized sources. Get your custom essay on
“ Angelina Jolie ”
Get custom paper
NEW! smart matching with writer

Finally, I will also discuss her support for medical health. ( Insert Connective: First, I will offer a quick intro to the life of Angelina Jolie Identify type: Shifts).

“Example is not the main thing in influencing others, it’s the only thing. ” –Albert Scheweitzer. This quote could be interpreted as if you’re doing a good example; people could look at it the right way, and fallow the good influence instead of the bad influences. This idea is found to be true through the life of Angelina Jolie.

One example is that Angelina Jolie was born on June 4th 1975 in Los Angeles, California, to her parents Jon Voight and French actress Marcheline Bertrand. Angelina rose to stardom in the 1990’s. She began acting at a young age, studying at the Lee Strasberg Theater Institute while in her early teens.

Later, Angelina attended New York University. Her parents served as a strong positive example in her early life. Another example is that even though Brad Pitt and Angelina Jolie have not yet confirmed a relationship, the two have been sporadically spotted and photographed together in recent months.

Pitt and Aniston divorced earlier, after 4 ? ears of marriage. Angelina and Brad announced there relationship in 2005. This is an example of how her relationship is with Brad Pitt and not making it public until they were both ready. There kids would have to understand their relationship, when they don’t want it to be announced public. One other example is Jolie and Pitt met during the making of Mr. and Mrs. Smith in 2004. The couple’s first biological daughter, Shiloh, was born in the African country of Namibia in 2006. Jolie, Pitt, and their children had traveled there to avoid the media frenzy that seemed to fallow them wherever they went.

They wanted a semi-normal life and not in the spotlight the whole time. Last example is that Angelina Jolie had only one child, Maddox, when she met Brad Pitt. Maddox was adopted from Cambodia in 2002. Her relationship with Brad grew stronger and she adopted Zahara, child #2, from Ethiopia in 2005. her having or adopting kids shows she is a caring mother and is a good example as a mom, showing that she can take care of them. Her showing that she cares could get more publicity, and it also is a good example of how she is a real caring mother concerned for her kids.

Angelina Jolie Voight was born upon June 4th, 1975. She began acting at a young age and soon became a really successful actress. You may have seen her act in movies such as Mr. and Mrs. Smith and Maleficent.

She is also an accomplished movie director and has won various awards in the film market, including Academy Awards, Screen Actors Guild Awards and Golden World Awards. (Hollywood Life, Angelina Jolie). In her personal life, she is wed to fellow actor Brad Pitt.

They have 6 children, of whom three are embraced, and 3 are their own biological children. Angelina Jolie is a strong fan for adoption of children from all over the world, and her assistance can be seen in her actions. Of her children were adopted from Cambodia, Ethiopia and Vietnam.

The adoption of her very first kid from Cambodia bridged the change of her image from common starlet to humanitarian employee, which she even more developed in the following years. (Insert Connective: Now that I have spoken about Angelina Jolie’s career as an actress as well as her participation in overseas adoption, I will now speak about her humanitarian work. identify type: Signposting)

In an interview, Angelina Jolie mentioned that she was first exposed to what other people around the world faced in 2001, when filming in Cambodia. (UNHCR, Fact Sheet) d. After seeing the suffering in Cambodia, Angelina Jolie contacted the United Nations High Commissioner for Refugees and offered her help. This truly kick-started her humanitarian efforts in the world, as she was then named a UNHCR Goodwill Ambassador, with the aim to focus on refugees and displaced people during conflict. iii.She has since visited over 30 countries during her time as a ambassador. iv. She has been brave in the locations she has visited.

For example she visited Sudan during the internal conflict, Chad during the civil war as well as Iraq and Libya during the Libyan revolution.
Angelina Jolie has also set up and financed many charity organisations, such as the Maddox-Jolie-Pitt Foundation, dedicated to community development and environmental conservation in Cambodia. (MJPAsia) All of this intensive humanitarian work has earned her the status as youngest recipient of the Jean Hersholt Award for humanitarian activities in the Academy of Motion Picture Arts. (The Star, Humanitarian Work) (Insert Connective: My third and final point will cover Angelina Jolie’s support for physical and mental health in women identify type: Sign posting)

In a New York Times article titled “My Medical Choice”, Angelina Jolie made headlines across the world when she announced that she underwent a double mastectomy so she could prevent chances of breast cancer. (Nytimes, My Medical Choice) f. This courageous choice was made due to the fact that she carried a gene which increased the risk of both Ovarian and Breast cancer. (Breast Cancer Screening, The Guardian)

This choice raised a new awareness of people suffering from breast cancer, as well as the various options women faced with the disease. h. She also revealed that she had battled anorexia and self harm earlier in her life, and has openly supported various charities with regards to mental health and depression in youth and adults.

Angelina’s career has many influences in her life. There are many examples of how her career is good influences on people and her fans. One example of her career is that, Pitt and Angelina fell in love since shooting “Mr. and Mrs. Smith”. Another example is that Brad Pitt spends his free time studying green building techniques and designing sustainable architecture. This is an example that he cares for other things than just acting. One other example is that, in the 1990’s, Angelina Jolie became a popular actress. She gave a star-making performance in the 1998 television film Gia based on the short.

Tragic life of model Gia Marie Carangi, which won her a Golden Globe Award for best actress. Last example is that in 2005, Jolie received the Global Humanitarian Action Award from the United Nations Association of the USA for her activism on behalf of refugee rights. She continues to travel the world to drawing attention to global issues. There are many examples of Angelina’s additional information. An example of Angelina’s additional information is that Brad Pitt and Angelina Jolie visited children’s cancer centers.

They are showing a good example to others to make a difference. The second example of her additional information is that Last year, Brad and Angelina, along with actor’s brother, sister and their families, donated $1 million to St, John’s Foundation for Community Health and had the pediatric center unit dedicated to the burn after reading star’s mother Jane. Another example of her additional life is that Jolie and Pitt went to the African nation where Shiloh was born, staying for a week in a villa at the Naankuse Wildlife Sanctuary and Lodge in the village of Lang strand.

The last example of her life is that Brad Pitt and Angelina Jolie are the #1 celebrity couple on the radar of nearly every tabloid and celebrity gossip magazine. Angelina Has made a great impact on peoples lives, and still does today with her acting all over place. She is a great women and everyone should know that, she takes care of her kids with the most respect that she could ever have. Her life is at a good point right now, because she has her acting life, her kids lives to take care of and her husband to come home to. Her life has so many good examples, that people should look at and fallow. Angelina’s life is a great example to others. 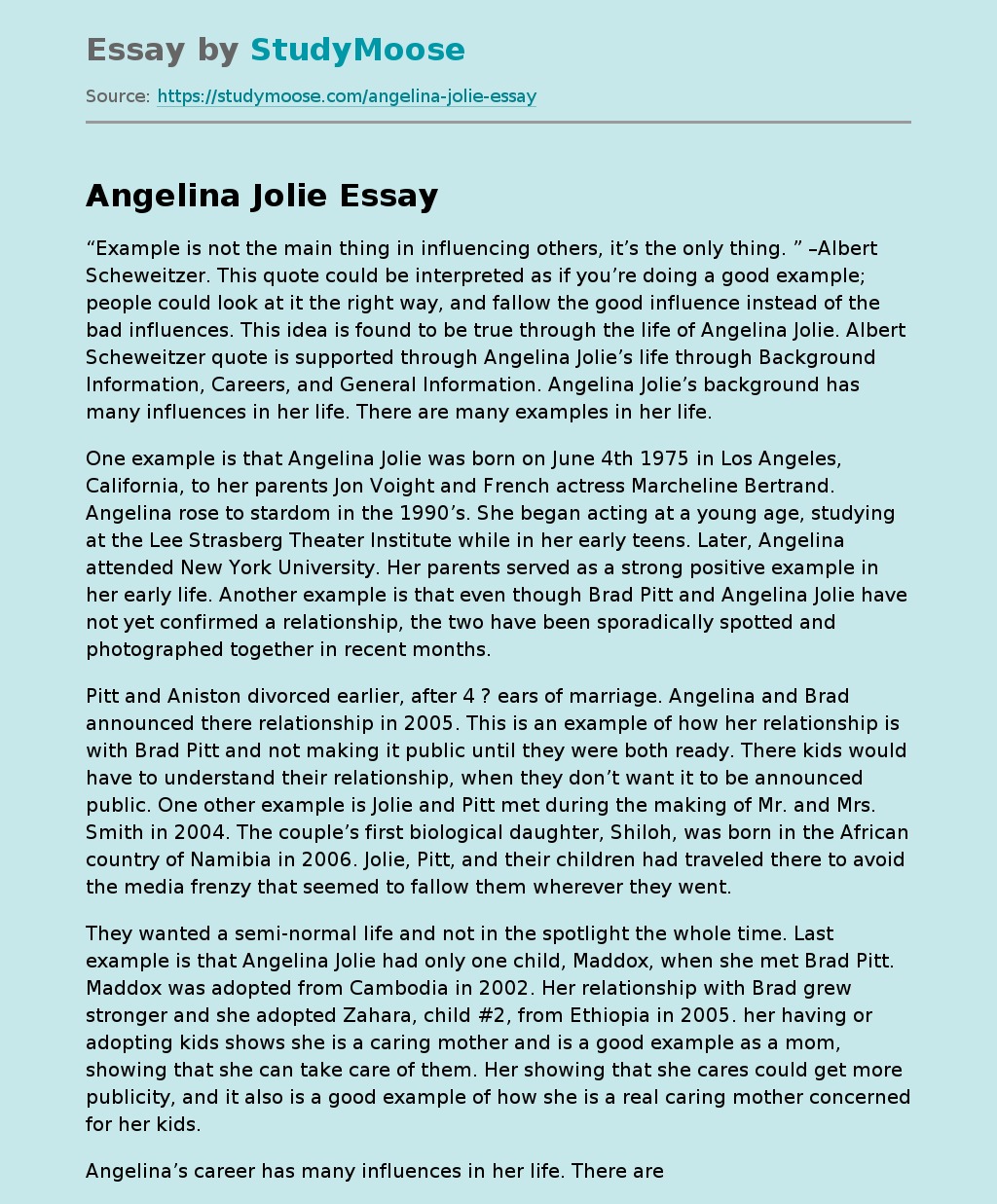