Anatomy and Physiology of Pelvis

The pelvis is a large semicircular bone complex that forms the base on which the torso and upper body are positioned. The pelvis, which is a rigid and inflexible portion of the skeleton, is built to provide a foundation of the movement of other parts of the anatomy, particularly the back and the legs. The pelvis also permits the weight of the entire upper body to be evenly distributed to the legs, which are connected to the pelvis through the hip joints.

Don't use plagiarized sources.
Get Your Custom Essay on Anatomy and Physiology of Pelvis Just from $13,9/Page

The sacrum and the coccyx (the tailbone) are the bottom portion of the spine that make the connection to the pelvis; the presence of a ligament connecting the sacrum to the pelvis is not a typical joint, as the pelvic structure is capable of very little flexion or extension on its own. The pelvis also protects the lower organs of the abdomen, particularly those of the renal and intestinal tracts. Also important is the rigid and supportive structure of the pelvis, an essential aspect of the ability of the body to move dynamically through the legs. If the pelvis were less stable, the legs would not be able to generate either propulsion or their range of motion.

Abnormalities.—There is arrest of development in the bones of the pelvis in cases of extroversion of the bladder; the anterior part of the pelvic girdle is deficient, the superior rami of the pubes are imperfectly developed, and the symphysis is absent. “The pubic bones are separated to the extent of from two to four inches, the superior rami shortened and directed forward, and the obturator foramen diminished in size, narrowed, and turned outward. The iliac bones are straightened out more than normal. The sacrum is very peculiar. The lateral curve, instead of being concave, is flattened out or even convex, with the iliosacral facets turned more outward than normal, while the vertical curve is straightened.

Anatomy and Physiology of Pelvis. (2016, Oct 09). Retrieved from https://studymoose.com/anatomy-and-physiology-of-pelvis-essay 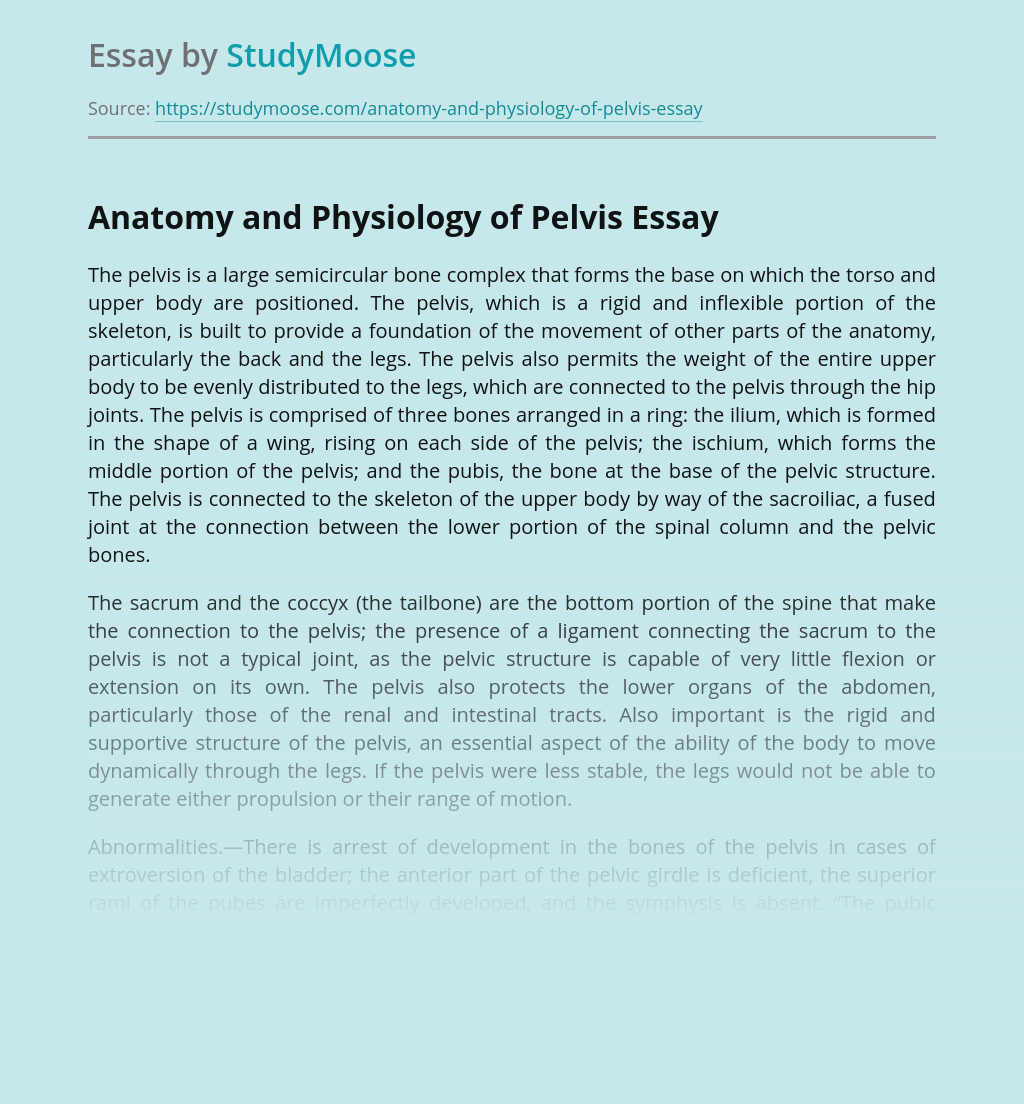 1 How did your findings compare to the rest of your team and to the actual data provided by your teacher? What could account for any variation? 2 Why do you think the pelvis is often the first bone forensic anthropologists look to in determining sex from skeletal remains? The pelvis is the first bone...

1. Dr. Baker spends a long time listening to (auscultating) Caleb’s heart. a. Where on the thoracic surface do you auscultate to the tricuspid, mitral (bicuspid), pulmonary, and aortic valves? Auscultation for the tricuspid valve would be in the left sternal margin of the 5th intercostal space. The mitral valve sounds are heard over the...

Currently, 68, 000 Americans are waiting for an organ donation, with a name added to the list every sixteen minutes. Twelve Americans die every day because a needed vital organ is not available (Curtis 213). For those who do not know an organ is a part of the body having a specific function, such as...

View sample
The Origin of Medical Terminology & its Meaning

Understanding the importance use and history of medical terminology can seem complex and difficult to understand. Although these terms may seem intimidating, they can be deciphered and understood if you know what to look for. The meaning of the word medical terminology is a system of words that are used to describe specific medical aspects...