American writer, Edgar Allan Poe is mostly known for his poems and tales. In 1843, The Black Cat was published. The writer starts by telling his story from a prison cell; this short story is based on dark romanticism with an unforeseen ending. The narrator of this tale which is unmentionable is described as humane but eventually becomes barbaric and blames the cat for his harsh actions. It is likely to characterize the narrator as unreliable because of his uncontrolled fury, alcohol abuse, and inhuman outburst.

Don't use plagiarized sources. Get your custom essay on
“ Analysis “The Black Cat” by Edgar Allan Poe ”
Get custom paper
NEW! smart matching with writer

The first evidence that Poe gives the reader of the narrator for being unreliable is his uncontrolled fury. The narrator states, ‘The fury of a demon instantly possessed me. I knew myself no longer’ (Poe 671). Meaning that his rage wasn’t coming from himself at all, but by a dark spirit that had taken over his body. He is no longer in control of his actions. There could be a mysterious connection between the cat Pluto and the narrator.

In addition, the name Pluto comes from the Roman god of the underworld (Poe 671). It could be that the storyteller was possessed by this spirit from the underworld. Therefore, the narrator is filled with immense anger towards Pluto and wishes to do evil.

The narrator can be characterized as unreliable because of his abuse of alcohol. Although at the beginning of his confession, at the time when he was normal and humane, Pluto was his favorite pet and for many years they shared a special connection. But that was about to change for the narrator becomes short-tempered and hurts the poor cat.

For instance, the narrator claims, “I grew, day by day, more moody, more irritable, more regardless of the feelings of others.”(Poe 671). People seem to lose control over their actions while under the influence of alcohol, and incline to mostly doing bad deeds. As he grows heartless, the narrator is not able to control his desire to do evil. One night he comes home from drinking, and out of nowhere he feels irritated towards the cat and cuts his eye out.

Furthermore, textual evidence shows, ‘But my disease grew upon me-for what disease is like Alcohol!'(Poe 671). Once under the influence of alcohol, there is no way of coming back to a sane mind. It becomes an addiction and many people won’t surrender, thinking that they find peace and comfort in it. Because of his continuous use of alcohol throughout the years he became unrecognized even by himself. Then suddenly, he undergoes a significant change which leads to a darker troublesome road.

Finally, the narrator is unreliable for having an inhumane outburst. This is accurate due to the following, ‘Goaded, by the interference, into a rage more than demonical, I withdrew my arm from her grasp and buried the axe in her brain’. (Poe 674) His loving wife tried to stop him from hurting the cat. He loses control and his reaction was cold-hearted hiding her body in the basement walls with no remorse. Generally, a person with this type of actions, are not in their right mind. How could someone react so cruelly to a simple gesture? This leads the reader to believe that the narrator is a psychopath.

The deceitful narrator can be seen as unreliable, mainly because he seems to be psychotic. He has no way of stopping his anger, which takes a toll on his personal life with his family and pets. With no self-control towards his actions, he sinks into extreme alcoholism. In conclusion, his characteristics change drastically in a matter of time; ending the life of his loving pet and wife instantaneous. 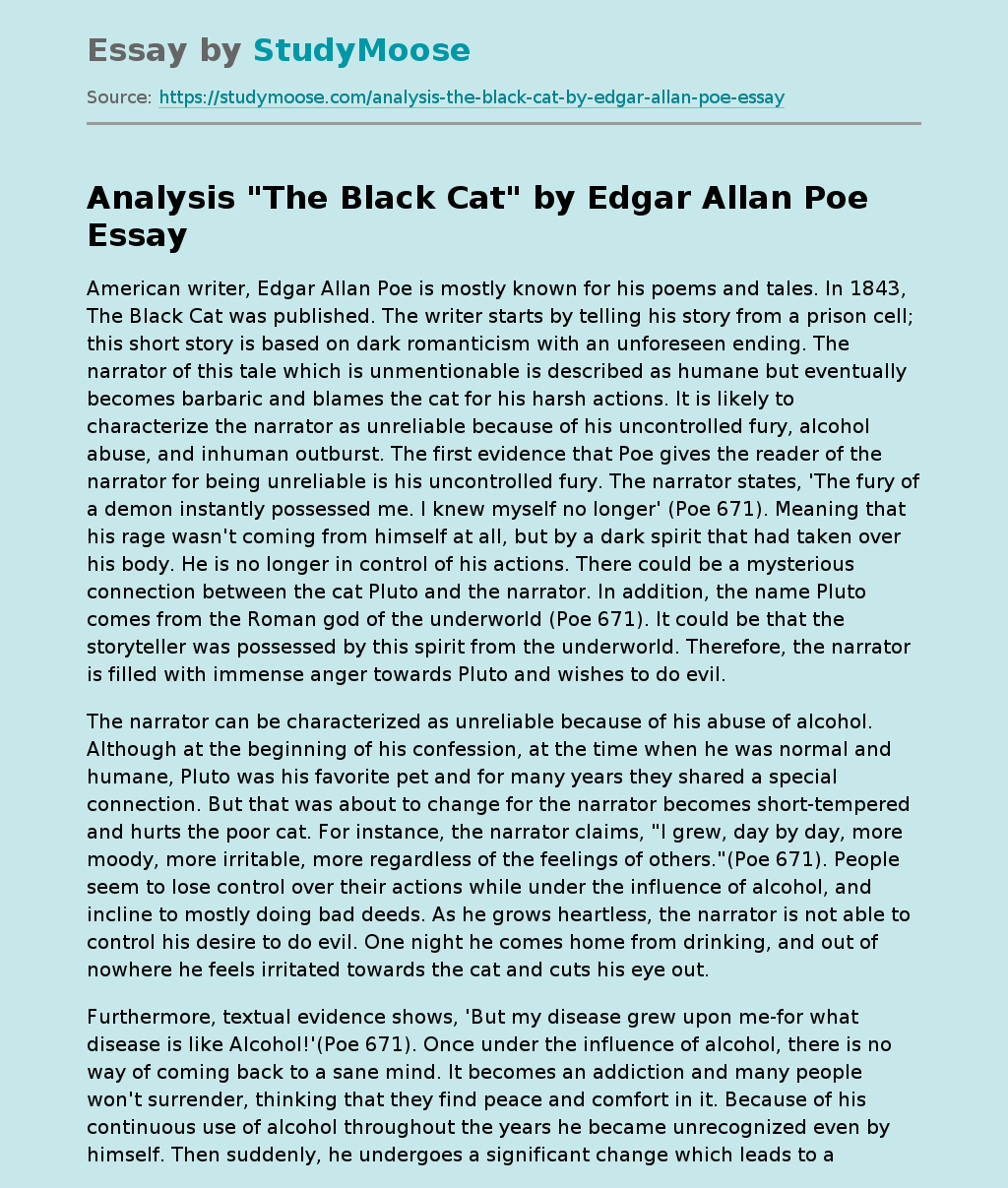