The poem ‘Nettles’ by Vernon Scannell revolves around a father’s perspective on an accident involving his son, through which the poet explores a father-son relationship, wherein the father tries to protect his son from the various difficulties in life.

Don’t waste time
Get a verified writer to help you with Analysis of the Vernon Scannell’s Poem Nettles
Hire verified writer
$35.80 for a 2-page paper

However, despite his efforts to shield his son from these problems, they will be a constant threat in life. The boy here is a metaphor for the army, with the nettles being an extended metaphor of recurring war. The combined effect of these metaphors throws light on the difficulties in life. The poet has crafted a title which aptly uses symbolism to depict the nettles as evil. A cursory reading of the poem portrays the protective instinct of a father for his beloved son, whom he tries to protect against all troubles in life. A reference into the author’s life tells us about his own involvement with army life, which is conveyed interestingly in the poem. There is an alternating rhyme scheme present throughout the poem.

Enjambment is used to help make the poem sound like a story. The poem has a single stanza which shall be divided into, for analysis, four stanzas consisting of four lines each. The first stanza revolves around a description of the poet’s son falling into the bed of nettles in a garden. The poet aptly uses the word“bed”, a term often associated with comfort that ironically the nettles cannot provide. The “green spears”, a metaphor for the flower stalks, show his discontent with the latter, therefore portraying them as a weapon of destruction.

A spear is a weapon of war and killing, inducing war and blood imagery. The poet’s interesting word choice in the description of the nettle bed as a “regiment of spite” portrays them as an enemy. The phrase “regiment of spite”, coming from archaic vocabulary, is used in the juxtaposition of the nettle bed with an opposing army in a state of war. Moreover, the poet paints the setting of the regiment as being behind the shed.

This creates an illusion of a hidden enemy, ready to pounce on his innocent son. The close-knit father-son relationship is shown by the persona’s hatred towards the nettle bed, which hurts his beloved son. The father is willing to do anything to protect his son and despises his son’s enemies and ill wishers. This stanza talks about the father’s protectiveness of his son from the numerous troubles in the latter’s life, inducing the readers to be warm towards this beautiful relationship. The second stanza revolves around the son’s reaction to being hurt by the ‘green spears’. By effective use of word choice, the poet describes the son as“the boy”, highlighting the transition in language from a more personal “my son”. The poet uses visual imagery to conjure vivid images of his son with “white blisters beaded on his tender skin”. The words ‘white’ and ‘tender’ portray the son’s innocence and purity. Moreover, the word “beaded” is used to depict the enormous amount of blisters and how his son’s sufferings were deep. The father speaks about comforting his son in the next line through the word “soothing”.

The pain is being described as ‘raw’, to draw a contrast between the son’s innocence and tenderness, and the nettles’ ability to hurt. The father is afraid that the son’s memories will leave him scars, which may remain with him forever. However, as shown in the end of the stanza, the son’s terrible memory is washed away. The son has moved on from the incident, but the sense of pain still lingers. The father-son relationship is shown to be one of immense love with the father protecting and consoling his son. The third stanza, more literal in meaning, revolves around the narrator’s reaction to his son’s injuries. In the first line, the poet removes his billhook and prepares to destroy the nettles. Through the second line, the poet is shown to be destroying the nettles. By apt use of word choice, the poet describes his ‘fury’, highlighting his anger towards the nettles for trying to harm his son. By the action of destroying the nettles in this stanza, the poet juxtaposes destruction of enemies and protection of loved ones, throwing light on the persona’s love towards his son.

The poet uses personification by describing the nettles with the human quality of being ‘fierce’. This makes them seem like the enemy’s army which has been destroyed by the father. The poet ends the stanza using an enjambment to possibly show the continued struggles in his son’s life, leading the readers to connect emotionally to the father’s devotion to his son’s happiness. The final stanza revolves around the nettles retorting to the father’s attacks. In the first line, the father is shown to give the nettles a funeral. This shows the father ending the troubles caused by the nettles. With effective choice of words, the poet describes how the ’sun’ and ‘rain’, representative of nature and its power, finally help the nettles grow. The word ‘recruits’ shows the enemy army was returning and regrouping.

Furthermore, the word ‘tall’ depicts the nettles being stronger and healthier than before and their readiness for the battle. The final line states that the son would be hurt by the nettles soon and again. While problems won’t wane with time, despite all of the father’s efforts, the son will have to find a way to learn to adapt to the renewed struggles in his life. On a concluding note, while an individual may have multiple protectors, the lesson of independence is fundamental to life. Hurdles must be encountered and tackled to emerge with strength and power. One of the most interesting poetic devices used is the metaphor of war, drawing upon the battles in a person’s life. In “Nettles”, Vernon Scannell expresses how the son must eventually stand up on his feet, despite the father’s attempt to protect him though his life. 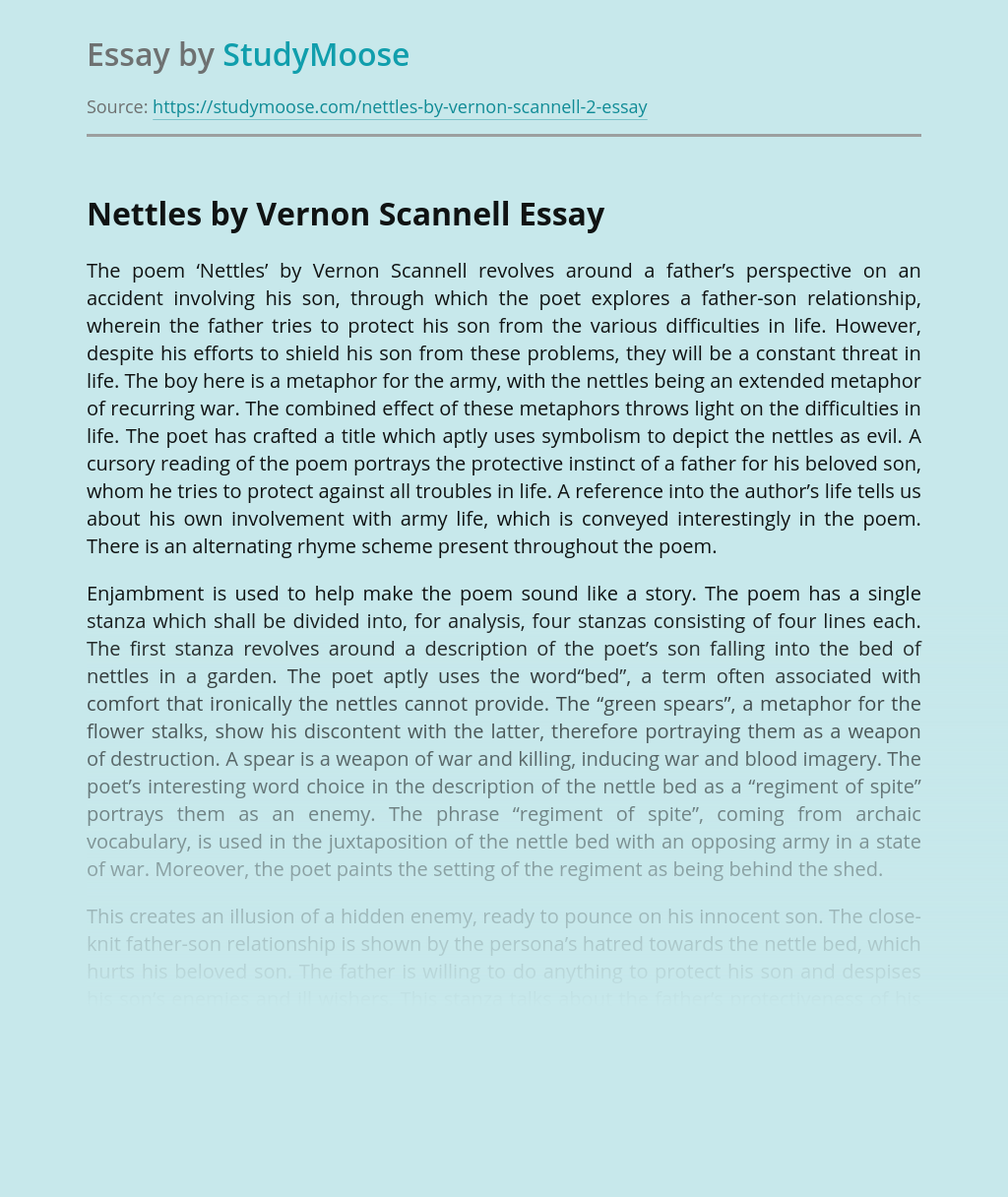 Don’t waste time
Get a verified writer to help you with Analysis of the Vernon Scannell’s Poem Nettles
Hire verified writer
$35.80 for a 2-page paper
Stay Safe, Stay Original