?Write a critical appreciation of the poem INCENDIARY by Vernon Scannell. You should comment on theme, diction, tone and structure. An incendiary is a bomb which sets things on fire, which gets across the idea that the boy was like a dangerous weapon, ready to explode at any time. This poem is about a boy who sets a farm on fire in hope that he receives the attention he has been longing for. In the first line, the poet describes the boy to have a face “like pallid cheese”.

Don't use plagiarized sources. Get your custom essay on
“ Poetry Criticism ”
Get custom paper
NEW! smart matching with writer

This simile is depicts the boy to look quite sick and weak.

We immediately feel pity and realize that the boy is uncared for. The poet also describes the boy to have “burnt-out little eyes” implying that, with reference to fire, his eyes have died out showing that he has lost hope. The fire was huge, boiling and all-consuming, as implied in this quote: “As brazen fierce and huge, as red and gold and zany yellow.

” This suggests that the fire was a multitude of colours- “red, gold and zany yellow”. It was also bold, savage and extremely big- “Brazen, fierce and huge”.

The word zany also suggests it being, uncontrollable or wild. The poet shows the extent of damage caused by the fire through the quote “spoiled three thousand guineas” worth of crops. The fact that he uses “guineas” could imply that the poem was set some time ago. Scannell portrays the scene as frightening and very damaging: “Is frightening- as a fact and a metaphor”.

He describes the flames as “flame-fanged tigers”. This is a metaphor in which the flames are compared to tigers; wild animals which are perceived as viscous and ferocious.

These large flames are said to be “roaring hungrily”. The use of the word “hungrily” implies that the flames are consuming while the use of the word “roaring” is an onomatopoeia showing that the fire was loud. The reader no longer feels a sense of pity towards the boy because he has caused so much irreversible damage. The feeling of hostility is heightened through this quote: “And frightening too that one small boy should set the sky on fire and choke the stars”.

This use of personification portrays the image of the large amount of smoke rising so high that it blocks out the stars. This could possibly be another indication of lost hope as the light of the stars is no longer visible. The poet once again tries to make us feel pity for the boy: “Such skinny limbs and such a little heart which would have been content with one small kiss had there been anyone to offer this”. This quote once again introduces the theme of neglect. His “skinny limbs” show that he is malnourished.

The boy is longing for “one warm kiss” which gives the reader an idea of his motives. He is probably seeking attention, in an effort to be loved. The poem doesn’t have a particular rhyme scheme however rhyming couplets appear three times throughout the poem, one of them appearing at the end. Like this, the poet emphasises specific lines in which he may want to be particularly powerful. When a poem ends in this way after not having much rhyme throughout, it can make it more emotionally moving.

Due to the lack of punctuation and the effect of the rhyming couplets that appear, the tone is quite fast which possibly indicates the short amount of time in which the farm caught fire. It may also create a lively atmosphere to bring the energy of the fire to life. In this poem, Scannell uses an exaggerated but possible example of what a child may do when he or she is uncared for. Through this he tries to show us the consequences and dangers of neglecting children and the desperate measures they may turn to. 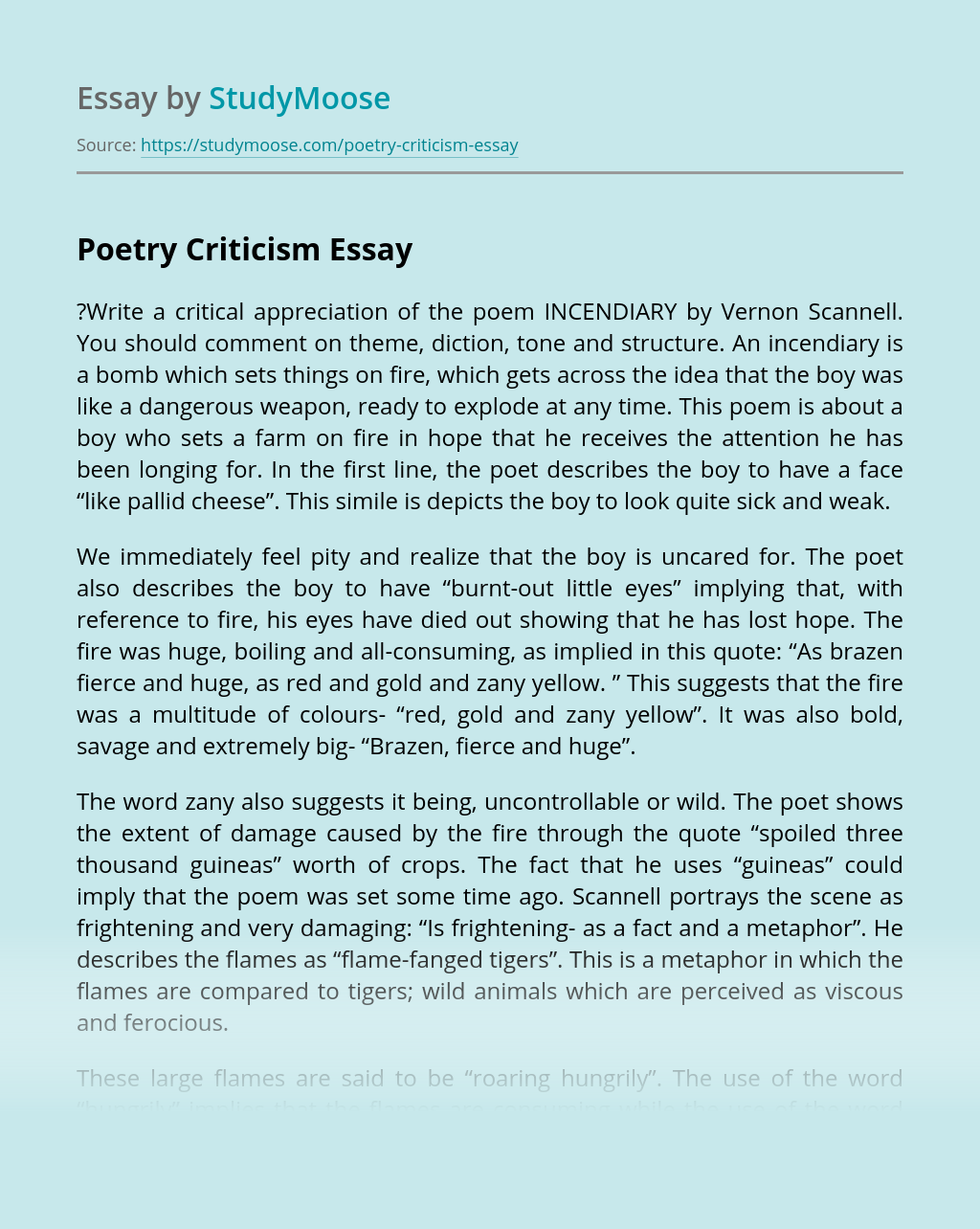