Analysis of Play "The Crucible"

Arthur Miller wrote the play, The Crucible, based on a true historical event that took place in Massachusetts Bay Colony that was known as the beginning of witchcraft in the year 1692 located in Salem. This play is a reflection of Miller’s interpretation based on a modern yet historically even that led to a tragedy later on. In The Crucible, Arthur Miller uses diction, figurative language and rhetorical appeals in order to convey the audience his message through the lens of his work.

Don't use plagiarized sources. Get your custom essay on
“ Analysis of Play “The Crucible” ”
Get custom paper
NEW! smart matching with writer

The first rhetorical device that Miller uses in his play was diction. The meaning of diction are the words or phrases that the author uses in his writing that gives an effective persuasion in his work. Miller represents biblical words in the use of it in order to conveys an important message through his play such as “damnation” and “abomination” which later led on the quote that was stated in the book, . “Old scores could be settled on a plane of a heavenly combat between Lucifer and the Lord:” (Miller 8).

As a reader the interpretation behind the quote is that God being the good figure who is our father heavenly savior meanwhile Lucifer is known as an evil figure that has been is the leader of hell. This device can help the reader identify the purpose of the author to why he indicated such specific words through the lenses of his play and based on his interpretation.

The second rhetorical device that Miller used was figurative language in order to convey his readers to promote his meanings of the play.

A figurative language promotes the figurative speech in order to have an effective and persuasive work that uses impactful resources to make their point reliable. “This farm’s a continent when you go foot by foot droppin’ seeds in it” (Miller 51). The quote that is stated above not is an example of metaphor but it may also be classified as a hyperbole that the character, Proctor himself has stated. As the audience you may began to notice that Proctor did exaggerated of how he explained to his wife when they had a casual talk as well as we can assume that Proctor’s thoughts were here and there as well.

The final rhetorical device that Miller used was the rhetorical appeal that help his writing to have more of a strong message. As the plots began to unfold throughout the play, the character such as Proctor himself conveyed a rhetorical appeal such as pathos through his interaction with his wife Elizabeth. “Spite only keeps me silent. It is hard to give a lie to dogs” (Miller 136). Proctor himself stated this as he begun to have realized that he must come clean to his wife. This moment unfolded to Proctor confessing the entirety of his wrongdoings to his wife. This is when the example of the rhetorical appeal of pathos was used through Miller’s play.

Analysis of Play "The Crucible". (2021, Jan 29). Retrieved from https://studymoose.com/analysis-of-play-the-crucible-essay 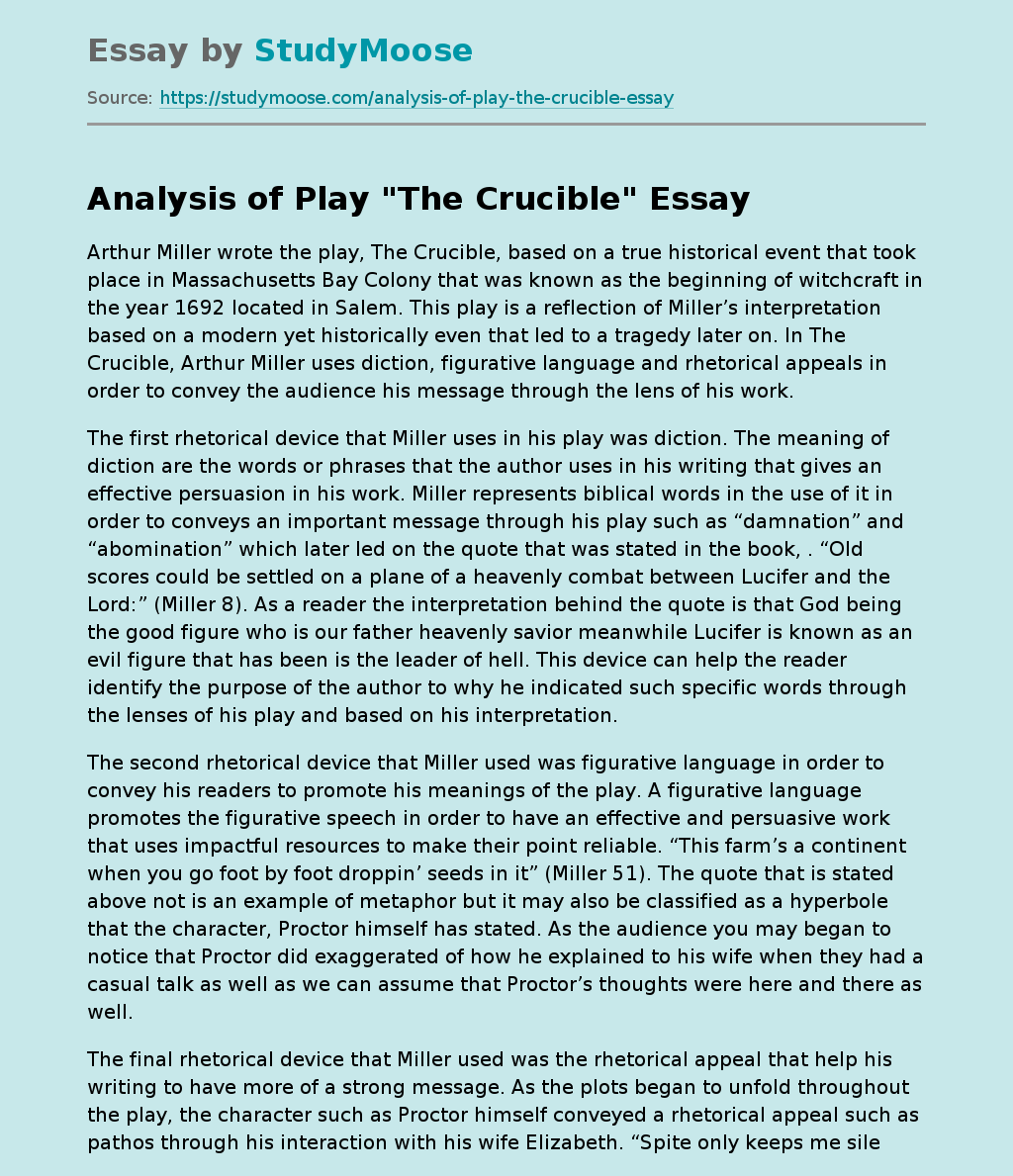