Analysis of Play "The Crucible" by Arthur Miller

The 1952 play The Crucible by American playwright Arthur Miller, is a dramatization of the Salem Witch Trials, which took place in the Massachusetts Bay Colony during 1692 and 1693. Miller wrote the play as an allegory to the current trend of McCarthyism in contemporary politics, where the US government “witch-hunted” accused communists with little to no evidence during the Second Red Scare in the Cold War. This is represented in The Crucible by the predominant themes of mass-hysteria and societal tension found in almost all character interaction.

Don't use plagiarized sources. Get your custom essay on
“ Analysis of Play “The Crucible” by Arthur Miller ”
Get custom paper
NEW! smart matching with writer

The title itself is a play on words, it refers simultaneously to the severe struggles faced by the inhabitants of Salem, as well as to the mixing of religious and secular aspects of society during the trial. This is represented in my physical representation, titled ‘Birds of a Feather.’ An animation in which a virtuous white dove is shown to abandon its kin and then consort with a flock of black crows. In doing so, the dove begins to mirror both the crows flying pattern, and their colours.

The animation then fades to black and depicts a single crow landing, alone in the dark. This is representative of Mary Warren, servant of John and Elizabeth Proctor, who falls victim to the hysteria and peer-pressure of the accusatory girls. The animation demonstrates Mary’s naïve and malleable and subservient nature. The Salem Witch Trials came about due to complicity from similar ordinary people. Mary Warren, embodies that human fear and weakness and is ultimately swept up into the hysteria of the witch trials.

Mary’s nature reflects the witch trials as a whole, a theocratic-lynching founded on paranoia and herd mentality. To accentuate the relevance of the animation the key themes and character traits that can be attributed to Mary Warren, and in turn, the entirety of The Crucible will be explored and expanded upon.

Immediately introduced Mary Warren’s character. This quotation lets us know immediately that she is extremely timid, and very naïve. The fact that this description is provided in the stage directions illustrates that this is Mary Warren’s true character, as opposed to Abigail, who puts on a show as an innocent little girl. Mary’s stark contrast to Abigail highlights Abby’s manipulative nature, as she constantly takes advantage of those around her, especially Mary Warren.

Mary Warren embodies fear that crucial, human fear that provokes feelings of uncertainty and ethical ambiguity within her character. Throughout the play, Mary goes to great lengths to avoid punishment or persecution, regardless of the consequences for others, because of her fear and desire for self-preservation. This is shown in the animation by Mary’s (The Bird’s) willingness to conform to the larger group, regardless of the consequences to others, to secure its own safety. This represents the abandonment of logic and ethic of an individual when faced with physical fear. A fear that would provoke an individual to debase and redevelop one’s own thought process to copy that of the majority. By the Birds shift in colours from white signifying innocence, to black signifying the lack thereof, it represents this redevelopment. [Mary Warren: ‘You’re the Devil’s man… Abby, I’ll never hurt you more!’] This quotation clearly illustrates how malleable and fearful Mary Warren’s character actually is, as she has completely revoked her confession, even whilst knowing that Abigale is lying. It shows how deeply engrained the hysteria is in her mind, as she completely reverses her statement about Abigale. Mary Warren’s malleability emphasizes how weak most people in Salem are, buffeted one way and then another by whichever force is most powerful at the time. It is an allegory for the fear of punishment, which causes normal people to side with the morally-wrong to avoid the condemnation of the remainder of society. The Birds (Mary’s) change in colour is only prompted by the appearance of the largest bird (Abigale) this represents the social hierarchy and the influential effect Abigale has on the other girls. After seeing that Mary is acting out of fear and self-preservation, Abby decided to give Mary another reason to fear. [Abigale Williams: “I will come to you in the black of . . . night and I will bring a pointy reckoning that will shudder you”] this quotation highlights Abigale’s domineering presence and the fear that she galvanises to seize control and spread hysteria to fulfil her own motivations. By having the Birds’ colour-transformation occur only after the arrival of The Big Bird (Abigale) it demonstrates the hierarchical position that their internal group structure had as well as the driving force of Abigale’s presence.

Analysis of Play "The Crucible" by Arthur Miller. (2021, Jan 29). Retrieved from https://studymoose.com/analysis-of-play-the-crucible-by-arthur-miller-essay 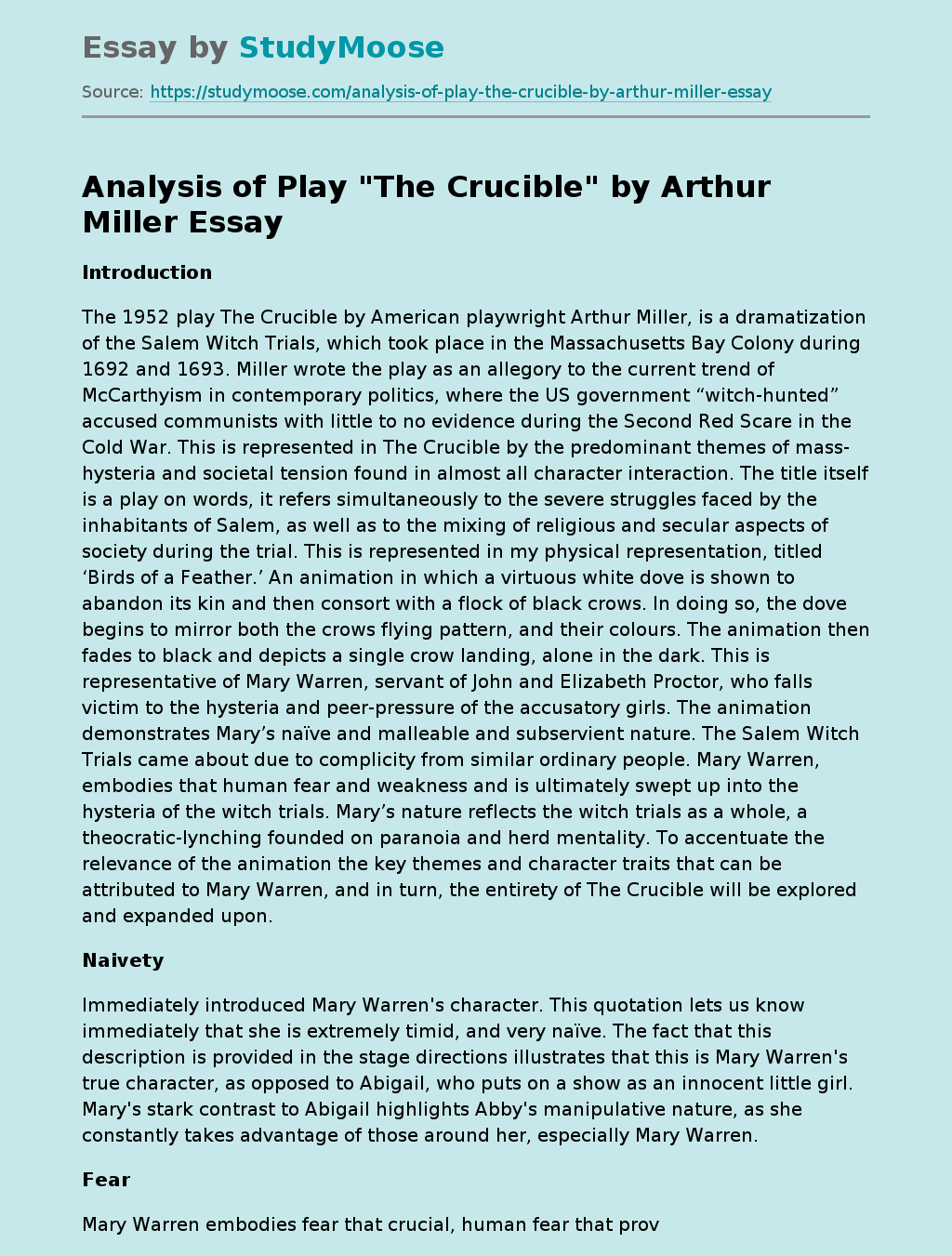