A story of gods, nymphs, ancient Indian mythology, spells and love, the romantic comedy Shakuntala by Kalidasa is a timeless classic. Similar plots are still being used in plays, TV shows and movies today, over two thousand years later; man falls in love with girl, something happens that doesnt allow them to be together, another event happens that allows them to be together with a happy ending. Shakuntala tells the story of the protagonist, King Dushyanta, falling for a young woman named Shakuntala.

Don't use plagiarized sources. Get your custom essay on
“ Analysis of Mythology Play Shakuntala ”
Get custom paper
NEW! smart matching with writer

Their love brings us on a journey that makes us laugh, cry tears of mirth and sorrow, and even blows us away by some of the beautiful imagery/poetry.

The play commences with King Dushyanta on a hunt, then finding himself in the presence of three women at an ashrama (sacred place). One of these women is Shakuntala, whom Dushyanta falls immediately in love with. Their mutual attraction eventually blossoms into a romance, but one day as Dushyanta is away, a hermit puts a curse on Shakuntala.

She was too distracted by thoughts of Dushyanta to receive him as a guest, and so he cursed whoever/whatever she was thinking of. The curse caused Dushyanta forget all about Shakuntala. However, the hermit had a slight change of heart. Because Shakuntala was too busy thinking of Dushyanta, the hermit told her friends that if Dushyanta were presented with a meaningful object representing his relationship with Shakuntala, he would regain his memory of her. Unfortunately, as Shakuntala greeted Dushyanta once more, she discovered that he did not remember her.

She remembered that he had given her a ring while they were together, but as she looked down to give it to him she realized it had slipped off her finger, probably while she was in the Ganges River. Shakuntala was then taken away by an invisible nymph up into the sky. Later on, a fisherman (who was taken prisoner for thievery) returned to the king the ring he had found and stolen from the Ganges. The king suddenly remembered everything about Shakuntala. He returned to the ashrama to discover that he now had a son born from Shakuntala. The climax is reached as Dushyanta and Shakuntala meet eyes once more with a powerful connection. They fall back in love with each other and are blessed with eternal happiness by Maricha the perfect. This story starts us off with the confrontation between Dushyanta and Shakuntala, then brings us to a moment of choice when Dushyanta is greeted by the seemingly unknown Shakuntala, and concludes with the lovers being reunited.

Dushyanta and Shakuntala are the main characters of the play, but even though the play is named Shakuntala, one believes that the protagonist is in fact Dushyanta. He is represented as a genuine king, all around nice man, longing for love. When he sees Shakuntala he is not thirsty with lust, but simply a gentleman interested in pursuing a healthy relationship. However, we see that when he is king (when Shakuntala arrives at his palace) he is ruling, just and powerful. Shakuntala is a young, beautiful, innocent woman, but she is also cautious and pessimistic. At first sight of Dushyanta she stands guard of her emotions. At second sight she immediately presumes that its not going to turn out right (p. 49).

Throughout the play, the majority of lines are spoken in prose, not verse. On the other hand, there are several times when a poem or lyric (written by Kalidasa himself) is said by one of the characters, which makes the play seem more poetic and rhythmic. On top of that, most of the voices offstage speak in verse. One believes that the author didnt want to escape the tradition of verse (ie. Ancient greek tragedies), but also wanted his own twist on the form of the language.

The theme is difficult for one to put his finger on. One theme is the struggle for one man (Dushyanta) to achieve the love of a woman, but his struggle is in vain as another man (the hermit Durvasas) takes the thoughts from that same woman. Even though it is not a situation where another man steals a womans heart, one believes that perhaps the author wanted to portray the piggery of men and how the competition between men is to be everlasting. Another theme could be that of love at first sight and how it is not only true but a part of life. Either way, the main theme is of troubled, confusing, powerful love and how it can be achieved by two people, even in the most delicate of situations (i.e. A king who has lost his memory and the emotionally sensitive daughter of a nymph).

This play is a romantic comedy, and the tone does justice to that genre. There is the romance between the two main characters, and the comedy which
is brought out in their situation, their language and the Jester character. Like every romantic comedy today, there is the inevitable dip in the plot which arouses different emotions in its audience (i.e. sadness, anger, confusion). Overall, however, the ending is a happy one, making this play an absolute delight to read.

Throughout the play, the audiences response to each action takes them on an emotional rollercoaster. We are swayed to the kings side as he pursues love and romance, and soon we are abruptly changed to Shakuntalas side as she is left alone and in despair. The ups, downs, twist and turns we are taken on as the play shifts from comedy, to romance, and to tragedy, leaves the audience with a meaning-experience: although the ride may be scary, by the end youre in love and willing to do it all over again.

This plays theatricality calls for three separate sets: the forest of the ashrama, the palace, and the scenes in front of the curtain. The ashrama should look welcoming, friendly, warm-spirited and nice. In contrast, one believes the palace should be large, intimidating and cold. The scenes in front of the curtain (where Anasuya and Priyamvada pick flowers) need only to have a few greens that symbolize a field, one in which the two friends can explore.

This play already has some similar traits to todays movies. For example, Sleepless in Seattle, starring Tom Hanks and Meg Ryan, brings us on the journey of two people who are on opposite sides of the country. They know that theyre in love but can never seem to get together because of their location and also their situation (Meg Ryans character has a fiancée). But by the end of the film the lovers are united atop the Empire Sate Building (reminiscent of An Affair to Remember) in what is, inarguably, one of the most romantic scenes captured on film to date.

This type of plot has been used more than often in the past few years, so bringing this play into the modern world has already been proven as a success. If one were to make an exact remake of this play with a modern twist, one would only change around a couple things: instead of being a king, Dushyanta could be a member of parliament, possibly a mayor. Also, Shakuntala could be, instead of the daughter of a nymph and a sage, that of a normal catholic family.

Shakuntala is a tale that takes the audience on a meaning-experience journey akin to a roller coaster ride. The ups and downs and twists and turns excel even the gods. It is well deserving of its renown, as is a play that is capable of touching the hearts of any person who has experienced the challenges and rewards that come hand in hand with love. 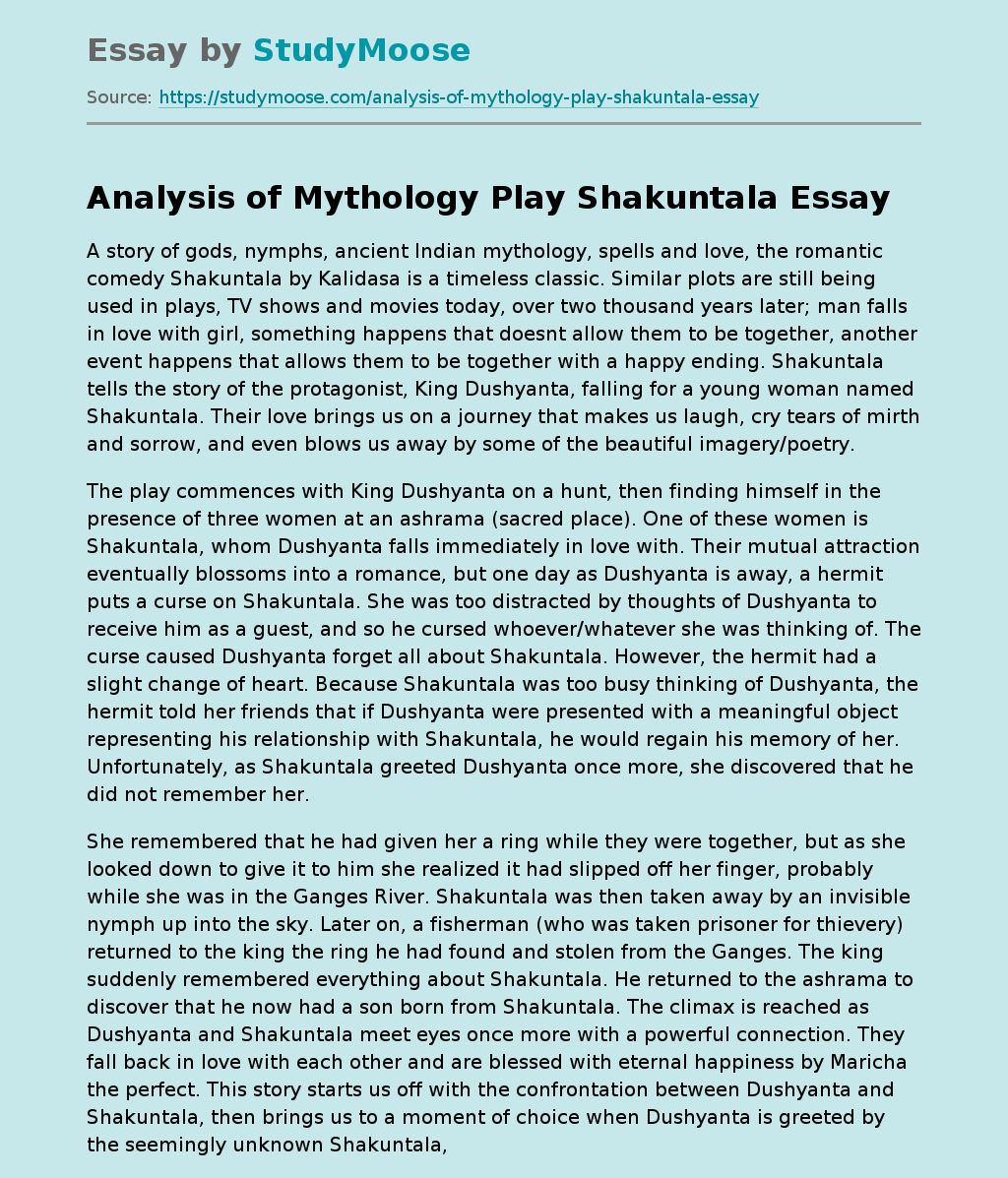