Nintendo tries to overcome the mistakes of past by coordinating portable gaming with home console targeting a broad audience. A try to overcome Wii U’s failure with innovation catering a fan base of over a decade

This report was developed to conduct a marketing analysis on Nintendo with a specific focus placed upon the ‘Switch’ product line. Data was obtained from Nintendo’s Website and Kotler Keller marketing management and few other sources in order to gain knowledge about Nintendo’s.

Don't use plagiarized sources. Get your custom essay on
“ Analysis of marketing plan of Nintendo Switch ”
Get custom paper
NEW! smart matching with writer

With a huge fan base which started from making toys, pivoting into multiple streams like mobile applications, mobile games, console gaming and several others Nintendo with its Wii legacy has been seen falling into losses due to the lack of innovation. Research into gaming trends revealed concrete evidence that customer values are shifting towards seeking products such as Xbox and PlayStation due to its ongoing innovation and never-ending games. The development of the new ‘portable home console’ range aims to hit a sweet spot between portable console which can be played as a home console, thus altering brand perception of low research and development.

This particular customer segment places a high emphasis on convertibility and ease to play.

The marketing mix analysis in this report identified multiple approaches to different metrics to which helped Nintendo to make and develop a record-breaking product which will create a separate base in the gaming industry. Elements to note are: the wide base of audience Nintendo believe to tackle and added flexibility of the product; positioning switch as a separate console amongst other competitors.

Nintendo has been facing a rough time with its competition coming up with record breaking innovation whereas it has been lacking that. After riding on the success of Wii for several years last hope of revival was Nintendo switch which catered to a niche audience of portable gaming.

Market can be defined as a group of people who you can showcase your marketing message with an objective of selling your product or service to them. Nintendo switch it’s been quite a while since Nintendo has appreciated any genuine feeling of strength. The brand inheritance might be a piece of the issue: it’s an easily recognized name that summons sentimentality for the beginning of gaming. However, it hasn’t indicated genuine advancement since the runaway accomplishment of the Wii over 10 years prior.

The primary method adopted by nintendo for division is demographic division. from the age 15-35 who are the gamers. Under social division, it focuses on the individuals who calmly prefer to play around and are not professional gamers.

Nintendo accepts they are showcasing to a wide advertise however the information doesn’t generally bolster that position. Except if there is a huge convergence of outsider engineers/distributers grasping the Switch, Nintendo will never hit the wide advertise that they accept will purchase their item. While Nintendo probably won’t understand it (possibly inside they do), their market is really the tight portion.

Nintendo tried to align its product among gaming console makers but lately with losing market the Channel of marketing chosen for their last hope Nintendo switch has worked quite well for them. Last boost of goodwill came through the release of Pok?mon Go. This helped to penetrate several levels of gaming market choosing households as their primary target.

It is a gaming console for individuals don’t play intensely and for no reason in particular. Because of this, Nintendo has an incredible bit of leeway over Microsoft and Sony. Another situating system Nintendo has utilized is by making gaming easygoing and making them portable for instance Dark Souls, Rocket League, Skyrim, Mario Kart 8, Donkey Country Tropical Freeze, and so forth.

the Switch left the entryway with the extremely sharp focal point of being an altogether new encounter. It even looked astoundingly changed. The advertising message was sharpened to flawlessness when that underlying trailer propelled. Despite everything I accept the organization ought to have received a “portable first, home console second” approach, yet what makes a difference is that the Switch gives its players the opportunity to choose that for themselves

The offers of the Switch flooded when Nintendo revealed its new Pocket Monsters Smash Brothers game, just before the Christmas season. One key bit of leeway Nintendo has over its rival is the solid estimating control over its rivals like PlayStation 4 and Xbox One, It is trusted that this will help life the Nintendo shares for over quite a while.

Nintendo isn’t costly similar to Sony or Microsoft item, it is reasonable for all and furthermore made for all. This technique has helped it remain in front of the challenge.

Sony and Microsoft are the significant contenders of Nintendo. The Sony PlayStation 4 has 57% of the overall industry and the Microsoft’s Xbox One has a piece of the pie of 27% and Nintendo’s Switch has a portion of 16%.

Nintendo has had the option to set up a brand that has an enormous fan following. Each new dispatch is a gigantic special occasion for Nintendo. During these occasions, a few realized characters are welcome to blend with the game sweethearts.

They are likewise furnished with comfort cases, shirts Nintendo additionally utilizes Ad battles and these are promoted through kids’ channel, prime channels, magazines, and bulletins. Nintendo likewise utilizes web-based social networking like Twitter, Facebook, and YouTube to make publicity about the items and declare the new dispatches. Nintendo is exceptionally acclaimed when the dispatch of its item.

The 3DS item dispatch had 85% of the UK buyers viewing the 3D video “Accept your eyes”. The “Play It Loud” crusades were likewise amazingly mainstream. The Virtual Boy was very publicized and the organization professes to have burned through 25 million dollars on its limited time exercises.

As indicated by research, the normal client of Nintendo is around 35 years of age and has been playing for a long time. The players originate from a various section of representatives, seniors, moms and fathers, military soldiers, understudies and they have driven the advancement of games.

The Nintendo games are progressively similar to a family game where guardians and child appreciate an intuitive and fun time with each other. The Nintendo buyers are not bad-to-the-bone gamers, they are the non-easygoing gamers that play for entertainment only and excitement and not for focused reasons.

These customers of Nintendo don’t have much purchasing force in light of the fact that, in the computer game industry, there are not very many effective organizations that focus on these shoppers, the non-easygoing players

Dissimilar to past Nintendo reassures, the Switch won’t be the cost head among contenders. The rack cost for the Switch sits at $300.00 (US dollar) and it does not have a pack-in game. The standard PlayStation 4 and Xbox One Slim are more affordable (and frequently incorporate a pack-in game). The Switch sits at a cost hindrance on the very beginning. This shortcoming is exacerbated by the way that both PS4 and Xbox One as of now have an enormous library of games covering a wide range of sorts. (I’ll cover graphical capacities in the following area.) Now you may think: “The Xbox One and PS4 discharged at $399 so it is anything but a reasonable correlation.” That is consistent with a degree yet lamentably for Nintendo, actually purchasers couldn’t care less. They will take a gander at the value directly before them and settle on a choice dependent on that. The hard truth is that the Switch isn’t a cost chief. It is more affordable than the PS4 Pro (and the Scorpio) yet more costly than direct contenders. Purchasers will see this cost contrast, look at accessible games, and except if they have a convincing motivation to purchase a Switch, may decide on a PS4 or Xbox One Slim.

Nintendo needn’t bother with a huge deals triumph to demonstrate that they can at present be fruitful in the present market. They need a minor triumph. They need the Switch to sell reliably over quite a while period. It doesn’t need to be the top rated reassure in the market. It can bear to be third place. A reliably selling framework will pull in the two engineers and buyers. This is particularly valid if the gadget is well known with an interesting statistic that is enthusiastic about it (and spends a great deal of cash in that biological system). The reality of the situation will become obvious eventually what sort of buyer truly gets tied up with the Switch product offering. I trust, for us all who need to see Nintendo succeed, that the Switch offers all around ok to demonstrate Nintendo still has a spot in the home reassure computer game market.

After the failure of WiiU, the company needed a win and the Nintendo Switch demographics indicate that they may have achieved that, at least in the US market. According to the demographics, the core audience of the Nintendo Switch in a US household is pretty much the same as that of PS4 and Xbox One with 86% of the install base under 18 years of age while 69% falls within the 19-34 age group.

Combine the target audience with the insane rate at which Nintendo Switch is selling out of stock, it is clear that with the release of this information Nintendo is targeting third party developers by showing them that they have the user base, all that is needed now is content. 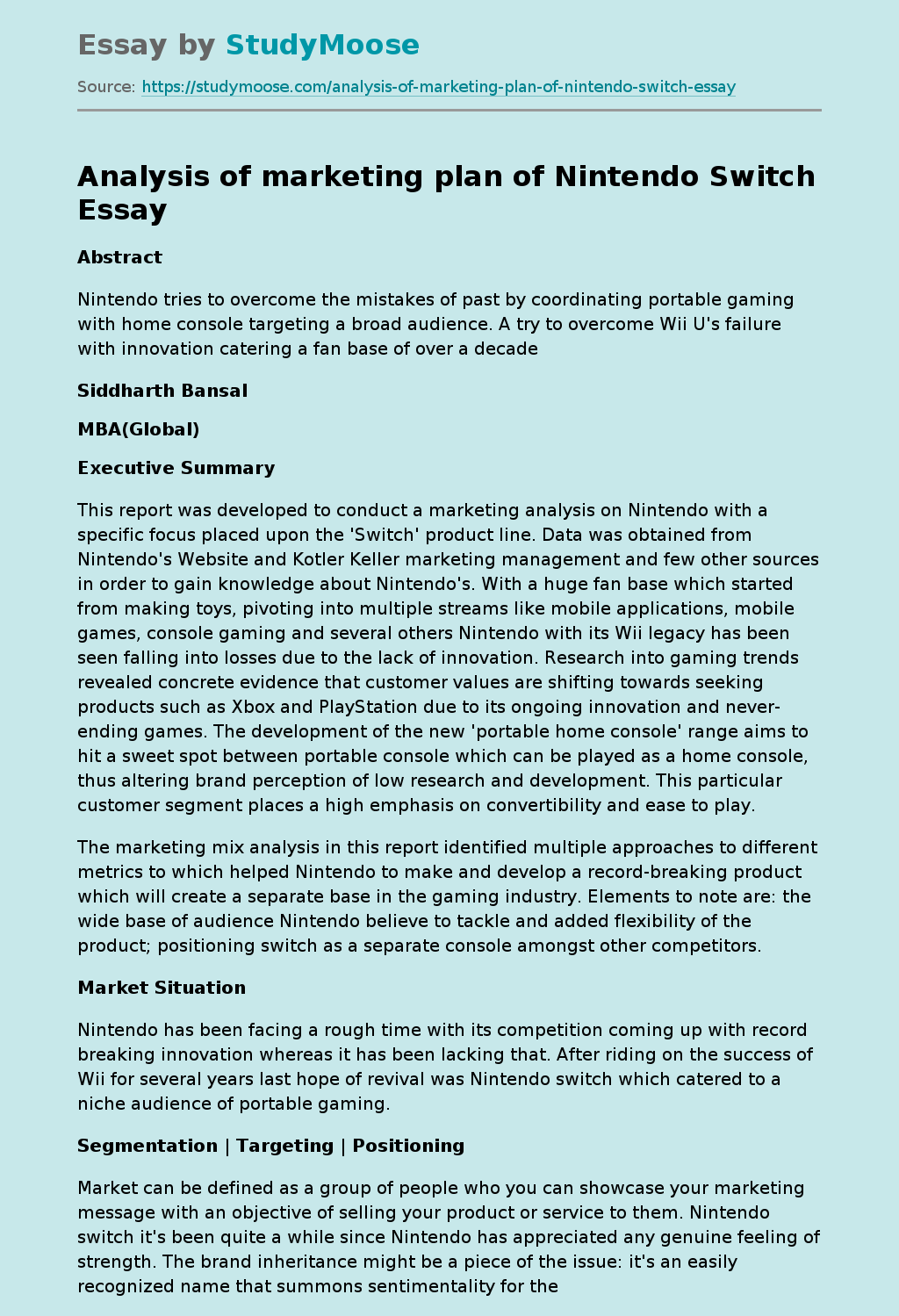