Wilfred Owen’s writes an intensely intimidating poem; the Latin title is translated, “it is sweet and proper to die for one’s country.” ‘Mori’ defines death, implying predictable completion for the soldiers. Reflecting the rich, suggests Owen’s target audience is well educated. He portrays war as a degrading experience using graphic imageries. He illustrates this tragedy of deceived soldiers in compromising their lives for their country.

Owen’s formal manner exposes truths by the means of the militaries returning from the war, trying to contextually convey a controversial message.

Don't use plagiarized sources. Get your custom essay on
“ Analysis Of “Dulce Et Decorum Est” By Wilfred Owen ”
Get custom paper
NEW! smart matching with writer

The militaries try to escape, but their health conditions terminate them from quick operations. “Bent double, like old beggars under sacks”, unexpectedly army cadets are solid men, however, Owen removes this fake portrayal of a robust fighter substituted as” beggar” and “hag”, implying war had caused them to cultivate hastily. Owen sees itself, “towards our distant rest begun to trudge”, “trudge” connotes being wobbled, hindering the pace almost dragging themselves in these terrible circumstances towards a “distant”, this monstrosity was obvious because of the soldier’s treatment.

Owen’s choice of words creates a dramatic atmosphere. He uses subject-specific nouns like, “flares” and “gas shells” distinguishing the military context. Using “men” as a substitute of “soldiers” emphasizes ordinary entities. “Lame”, “blind”, “deaf”, these emotive modifiers build up a disturbing picture of men due to these adjectives, suggesting these men are isolated from realism, all their responsiveness has been overawed by horrendous experiences of war. The verb modifiers, “bent double”, “Knock Kneed” and “coughing” developing awareness of the men’s physical condition.

Their state of health does not replicate the stereotypical strength of soldiers. “Haunting” becomes representational of their retreatment from but cannot escape mentally. The dynamic verb “marched” in conjunction of the adverbial “asleep”, is admittedly disturbing.

Other verbs describing their movements are more emotive and less expected, “trudge” and “limped” imply the physical and emotional weariness of the men as “cursed” conveying the oaths metaphorically because their movements are hindered by mud. “If in some smothering dreams you too could pace”, verb “smother” suggests Owen’s memories are slowly killing him, also linking to the soldier’s death because of the fumes, suffocating. We as readers cannot entirely relate to Owen about this matter, we can only envisage this. The separation from “you” suggests that we cannot know about war unless if we were present, we should not “dream.” The verb “flung” desensitizes soldiers, connoting a heartless nature. Further accentuating the many deaths, they encountered throughout their battles and for them to not expressively commit themselves of the pointlessness in war.

Past tense is used throughout, made up of reminiscences of one of the soldiers. “We” this plural pronoun reveals he was part of the soldier’s group. This inclusive pronoun reference makes them sound more dreadful, “we cursed through the sledge.” The soil of the battlefield was heavily cut by shells and the rain turned it to mud cussing in the unpleasant mud. The slow pace of this phrase, with its consonant and long vowels, imitate their slow pace. “Fitting the clumsy helmets just in time”, the epithet “in time” shows they find it challenging to put on gas masks. First-person singular and the second person plural demonstrates how Owen experienced his journey, for example, “we”, “I”, “my” and “me.” The second person singular makes the reader think of the nasty reality of wars, for example, “if you could hear.”

The sentence structures are varied, Owen uses a mixture of simple, complex and compound sentences appropriate to the poem’s shape; he is recounting his personal experiences using descriptive narrative diction. “Men marched asleep. Many had lost their boots, but limped on, blood-shod. All went lame; all blind;” through stern physical line length shows Owen’s distraught in the routine. The simple, “men marched asleep” and compound sentence, “many had lost their boots, but limped on, blood-shood” feels forceful, stating facts unemotionally of what is being interpreted as cruel. The coordination linker, “but” makes this appearance feel worse than expected. Parallelism is then used, “All went lame, all blind”, the vivid image of the troops marching is moderately powerful minor than what Owen provided. Parallelism suggests desolation as a holistic state in that no one escapes from. Owen’s vicious tone sound strict, portraying this in dark ironic method to picture the deceit of idealized representations of war. He abides on specific details of misery to exaggerate the impression he wishes to have on those who tell the “old lie”, he uses the mode of address, “my friend” which post modifies the ironic statement.

l, m, and b these alliterative consonants have a fuller mellow sound, slowing the reading, displaying exhaustion. The plosive b sound repetition has a vibrating effect to the contrasting between sounds is illustrative of the group’s slow hike punctuated by the pain. Owen uses a complex sentence that includes many adverbials to provide knowledge. “Till on the haunting flares we turned our backs and towards our distant rest began to trudge”, omitting grammatical function words turns the reader sentimental, “turned our backs.” “Haunting flares” effectively hang in the air like ghosts, reminding armed forces that those flares may lead to deaths. “Haunting” begins with the consonant “h” followed by the long diphthong “au”, this has a lasting impact.

Metaphorically, Owen graphically demonstrating war’s gruesome particulars. “Drunk with fatigue” and “deaf even to the hoots” display men’s physical states as so tired their minds are numbed. Owen uses many similes, “to old beggars”, destitute of good health like the elderly begging for longer living, “obscene as cancer”, the killer infers cancer, “coughing like hags”, comparing men to mature women. These are shocking comparisons; they are far from being heroic but are instead mentally and physically drained. “Like devil’s sick of sin”, Owen is explaining a demon’s face which is slanted by the dishonesties of sin and that hell also is sick of the constant occurring deaths because of war. He intentionally alliterates this to strengthen the reader to hiss, almost ironically replicating a snake, representing Satan. Furthermore, Owen’s neologisms “blood-shod”, the reader gets confused of the pararhyme ‘bloodshed’. “Knock-kneed” is quite disturbing, their feet are covered with blood, this is expressed graphically. The triplet, “guttering, choking, drowning” accentuate how much the dying male agonised in his last stage. The parataxis at the end stress these verbs forcing us to assimilate the meaning.

Owen’s rhetorical patterning is effective in understanding the juxtaposition of the revulsions and dramatic structural order. He uses marked themes, “bent double”, “all went lame; all blind”, “drunk  deaf” highlights the soldier’s circumstances. “Deaf” is used as hyperbole to intensify these soldiers appearing oblivious to everything around them and cut them off from normal life. The antithesis reinforces this sense of diverse worlds, “turned our backs” and “distant” are juxtaposed, modifying “haunting” signifying they cannot forget their involvement. “Ecstasy of fumbling”, “ecstasy” refers to heightened emotions, an oxymoron implying the struggle of wearing the gas mask on in terrible states. It connotes religious power, suggesting the high amount of fear of the men as the gas starts to envelop them.

Phonologically, the rhyme scheme links alternate rhyme, the phonemes in “sacks” and “backs”, “sludge” and “trudge”, “boots” and “hoots”, “blind and “behind”. “Yelling”, “stumbling” and “flound’ring” are rhymed, the pace fastens creating panic. The ellipses at the end imply a pause of the man “flound’ring” in the chaos as though he is “in fire or lime” producing an intense image of saving himself in the time he has left. While the ellipsis could mean that the events are quite private or abysmal for Owen to mention. “Like a man in fire”, this simile explains the dying man’s troubles. By creating aesthetic effects that are vexing and emotionally resonant is an impressive feat (Toba), the man is out of his own control and his actions could be compared to “a man in fire.” This is pathos; the reader reacting sensitively by his expressive jargon. “Dulce et Decorum est Pro patria mori”, Owen’s discussion has led to an unpleasant outcome. “Lie” is written as a capital L to improve the power of the phrase to impart the patriotic lie stimuluses wars as a portion of human history.

Written in iambic pentameter, Owen enunciates the solid beat made from the drill. The enjambment and parataxis reverse the rhythm; irregular punctuation makes words read at an uneven rate, which imitate worn-out soldiers who have stumbled and thrown themselves in the mud to uphold a well-ordered pace. To provide truth through poetic beauty is shown in the excellence of a poetic structure (Rabinowitz 2005). Most lines have 10 syllables, the pattern of stressed and unstressed syllables is not constantly the same, but every long and short line has 5 or 6 stresses. This draws attention to the key essentials used to build up the tension. Owen structures the four stanzas in uneven length, there is a regular ABAB CDCD EFEF rhyme scheme creating a natural flow that imitates human discourse. The third stanza compared to the latter, conveys his helplessness in communicating his never-ending nightmare. Owen uses imagery an effectively, “all my dreams, before my helpless sight”, we feel apologetic for Owen accepting his fate to be like it is, therefore cultivating our feelings of compassion. This creates a paradoxical portrayal “helpless sight”, he can see the men dying yet he is powerless, “sight” purposes as a synecdoche, stepping in as Owen’s voice.

The shuffling movement of the men over the “sludge” is depicted by the caesura in line 5 to 7. From line 8, the poet changes this metre to a trochaic, declining this activity, as the shells would interrupt the trudge. “Gas! GAS! Quick, boys!” emphasise the words they use, starting off the rhythm’s interruption, due to the four, short stressed syllables and the interruption of the voice, like an alarm preparing the reader of this distressing condition. Almost an action burst matching the battleground through the change of pace. Juxtaposing the submissive stride of the march reflected in the beginning, capturing their suffering. Capitalisation shows urgency by repetition and exclamation marks correlated to the last verse “some desperate glory.” “Incurable sores on innocent tongues”, the punctuation “-” next to “tongues” creates a dramatic peak causing the reader to pause to take that in, of the present tense and address the second person “you” in this caesura.

Due to Owen’s opposing viewpoints of war, we discover dehumanising truths of war. He fights in contradiction of the original interpretations of war and manipulates us to question the concept of war hence producing a deeper knowledge than just narrating war experiences in the poem. 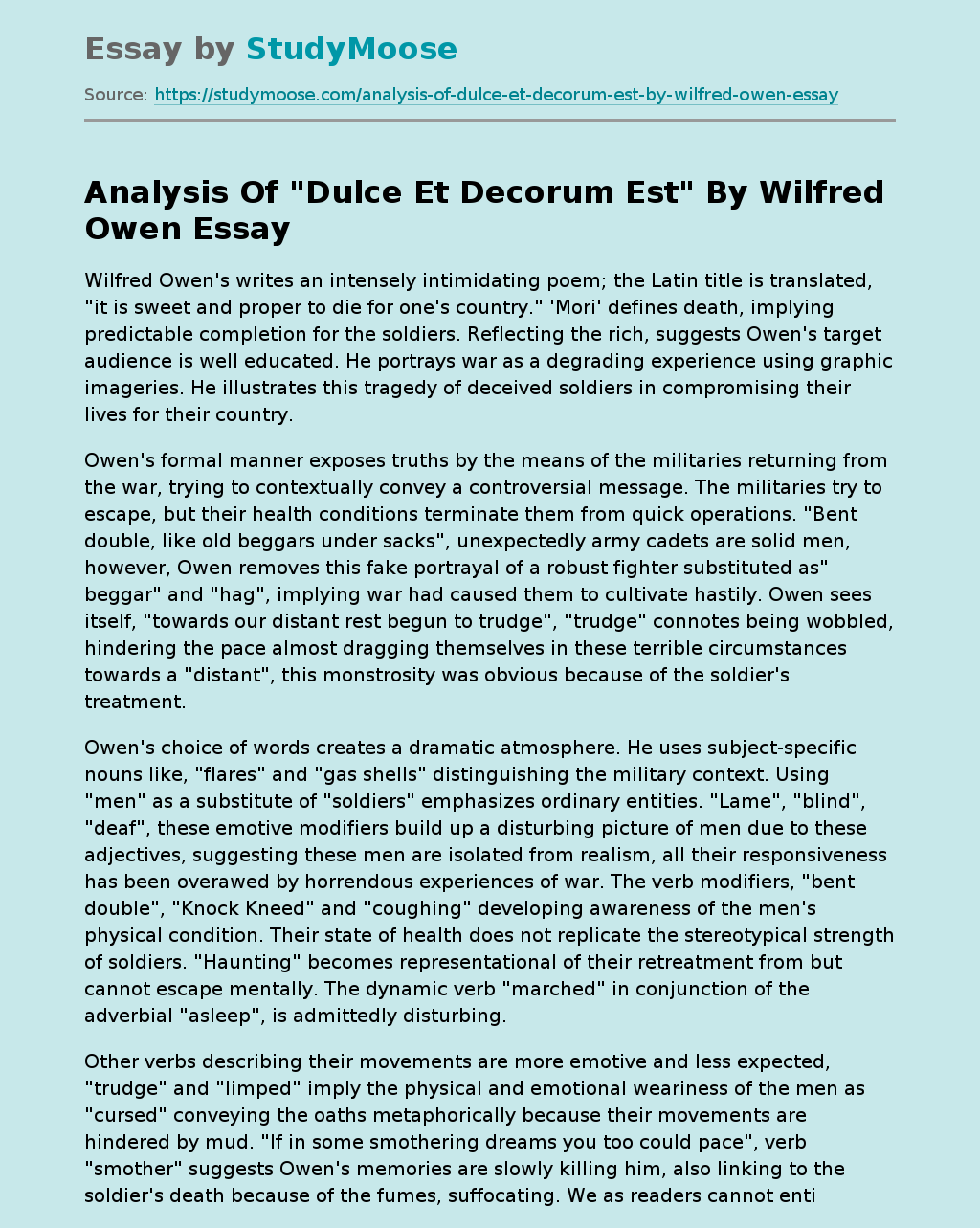