Owen shows that the men are exhausted

“Of tired, out- stripped Five-Nines that dropped behind” by personifying the shells, it shows that the war is getting repetitive, even the shells are tired. The phrase: “that dropped behind” suggests that the soldiers are passed caring about them now, they’re just so exhausted. Another example of this is when Owen writes: “All went lame; all blind. ” This can be interpreted in two ways: either that the soldiers are literally blind from the gas or various injuries, or that they are too tired to keep their eyes open so it’s almost as if they’re blind.

Don't use plagiarized sources. Get your custom essay on
“ Wilfred Owen ”
Get custom paper
NEW! smart matching with writer

Also metaphorically, the soldiers don’t know what’s going to happen next or in the future. The first stanza of this poem shows that even away from the front line the war is still so terrible. Owen makes the reader experience it too by using first person pronouns: “We cursed… our distant rest… ” This makes the reader feel more involved with the poem.

Suddenly the pace of the poem is quickened: “Gas! Gas! Quick boys! ” This shows how gas can appear out of no where when least expected. The word “ecstasy” is used to describe how the soldiers fumbled.

It’s an unusual word, it usually means happy or excited so by Owen putting it in this context it reflects the intensity of the soldiers desperation. Owen describes the experience of one individual soldier; this makes it more personal and helps the readers to feel pain and fear for these men: “flound’ring like a man in fire” the word ‘flound’ring’ relates to drowning and it brings across an image of this soldier drowning the gas, the intensity of it burning his insides: ‘fire’.

It’s as though this soldier is water flapping about like a fish deprived of water.

Owen brings in more imagery of water: “the misty panes and thick green light, as under a green sea I saw him drowning. ” The word ‘misty’ refers to the panes of the gas masks, with the smoke from the gas making everything foggy. By Owen using the colour “green”, it compares the gas to the huge expanse of the sea. It’s almost as though he was seeing this man in slow motion and he couldn’t do anything about it. The gas is so “thick” and he is described to be “under a green”, completely out of reach from the other men: how ever much they try to help: “helpless sight.”

There is irony in how this man’s experience is described: “guttering, chocking, drowning… ” because referring back to the title; this is the opposite of sweet. As the poem becomes more personal the pronouns change to ‘I’, Owen feels guilty that he couldn’t do anything to help his fellow soldier. Owen shows the reader how awful was is: “like a devil’s sick of sin. ” Even the devil would be sickened by what’s going on, it is beyond evil. The soldiers are compared to “children” because they have the innocence of a child; when they signed up for the war they didn’t know what they were letting themselves into.

Also in another one of Owen’s poems ‘The Sentry’ he describes them as if they are children too: “whined… sobbed. ” The reader learns that war reduces the soldiers from string, brave men to be just like children. Also, the reader is shown the responsibility of fellow soldiers and the compassion they have for each other: “coaxing” the image of a parent looking out for their child is brought across. In war the only thing they have left that is real and worth living for are each other.

The message Owen is trying to get across in ‘Dulce Et Decorum Est’ is strongly pushed forward: “The Old Lie” it sounds quite angry and shows how strongly Owen wanted everyone to know what war really is like. The enjambment in this poem almost makes you stumble in the same way the soldier do. In the second half of the poem the sentences are very long but Owen uses a lot of punctuation to make the reader pause at the right moments. At the beginning of the poem where the pace is slow there are long vowel sounds and polysyllabic words.

Owen uses quite a lot of literacy devices but subtly, for example alliteration: “Men marched… many” and metaphors: “all blind. ” The rhythm of this poem is a pentameter and it uses alternate rhyme, whereas in the poem ‘Exposure’ Owen doesn’t use proper rhyme; just words that sound like each other: “brambles… rumbles”. This poem is quite similar to Owen’s other poems; in ‘strange meeting’ he mentions eyes: “With piteous recognition in fixed eyes” and in ‘dulce et decorum est’ eyes are mentioned too: “Watch the white eyes writhing”. Eyes show all emotions and give away what’s going on inside people’s minds.

What the soldiers went through

By Owen bringing in eyes, it helps the reader experience what the soldiers went through and know how they’re feeling. In this poem dreams are mentioned: “In all my dreams” By the word ‘all’ this suggests that these dreams will never go away. In another one of his poems ‘The sentry’ he writes: “Watch my dreams still. ” Also in ‘exposure’ by Wilfred Owen dreams are mentioned too: “we cringe… back on forgotten dreams… ” This tells the reader that going to war and living through all the terrors makes the soldiers old, happy dreams seem ‘forgotten’ and so far away from them.

By Owen using dreams in his poems he tells the reader that war is not only in the present time of when it happens, but it stays with its victims and the terror if it haunts their dreams. We know that the title of the poem ‘Exposure’ means hypothermia but it could also be interpreted a different way: It suggests that the men were completely exposed to the terrors of war, including the harsh weather. The soldiers only had small dugouts to protect themselves from the bombs as well as the cold and wet.

But the conditions inside these dugouts were not always any better than being outside, they couldn’t escape. The reader learns this during Owen’s poem. The readers are shown that the weather did not only affect the soldiers physically on the outside but inside too: “Our brains ache. ” This suggests that the winds were so ‘icy’ they affected the men’s thoughts and interrupted their feelings and emotions. The use of personification in the phrase: “winds that knive us… ” tells the reader that they weather was an enemy to the soldiers and it was almost as bad as their opponents.

There is irony in the second line: “Wearied we keep awake because the night is silent… ” When everything is silent it is usually easier to sleep but for the soldiers the silence is unnerving, they don’t know when something unexpected might happen. The time when it’s quiet and everyone’s waiting is almost worse than the attacks, when the men are on their feet. In the first stanza of his poem, Owen uses ellipsis’ to slow down the pace of the poem which emphasises that during those long days waiting behind the frontline time was interminable. 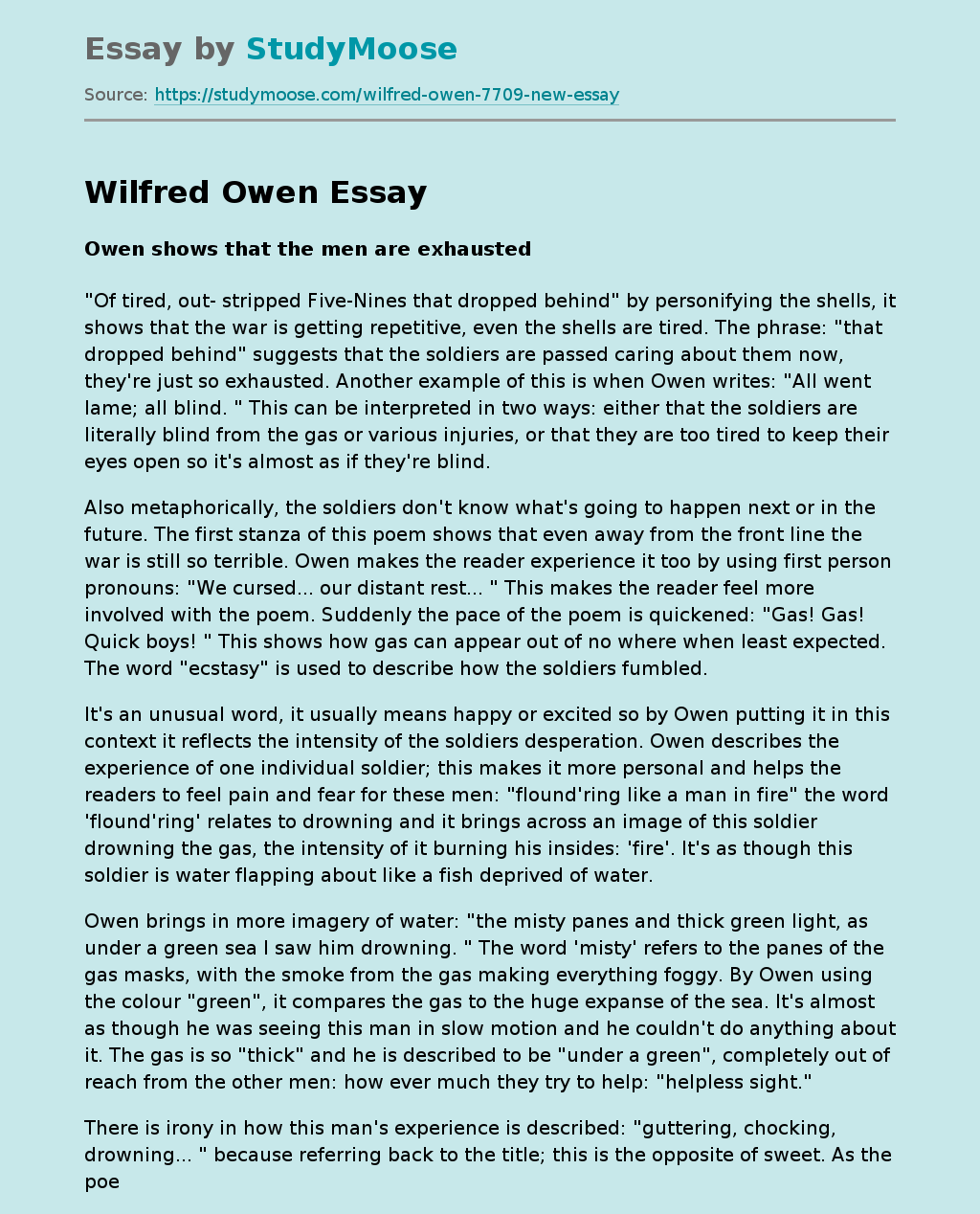