Analysis of Book "Interpreter of Maladies"

How is America characterized by the immigrants who live in it? Why is this melting pot of cultures we call home so unique and why do people choose to come here and make it a “home away from home?”. It’s because people want to build dreams and live a better life for their families in order to have the choice and opportunity for growth. People view America as the world leader for freedom and liberty to dream and be whoever they want to be.

Don't use plagiarized sources. Get your custom essay on
“ Analysis of Book “Interpreter of Maladies” ”
Get custom paper
NEW! smart matching with writer

People from many backgrounds come here to fulfill their dreams because for one reason or many it is not possible in their homeland. A work life balance and education can seem like a luxury in America when compared to what it means in other countries with a poor economic system and enviornment. Interpreter of Maladies written by Jhumpa Lahiri gives an insight to how people of other cultures that come to America are forced in to different situations that really test their beliefs, culture, and way of thinking and forces them to react.

It teaches us how tradition can still survive in a modern age and how love and relationships can be questioned in certain situations.

Lahiris story of “ When Mr. Pirzada came to dine” is a great example of a man who was robbed of his homeland due to a war in Pakistan. “That year Pakistan was engaged in a civil war. That year the eastern frontier, where Dacca was located, was fighting for autonomy from the ruling regime in the west.

In March, Dacca had been invaded, torched and shelled by the Pakistani army” (Lahiri23). Pakistan was caught in a civil war and Pirzada comes with a grant to study foliage of New England. He is in America isolated from his home culture. Lahiri makes it a point to show the reader what Mr. Pizada has left behind “In Dacca Mr. Pirzada had a three-story home, a lectureship in botany at the university, a wife of twenty years, and seven daughters” (23). There is something you have to question here. Why would he leave all of that for life in America with a small grant and living in a graduates small dormitory without even a proper stove? I don’t think that Mr. Pizada truly knows that the war had stripped him of his identity, culture, and home. Pirzada reflects the life that he once lived and that he has no want to be part of the American culture. But, on another level he is disengaged from his homeland and family, ultimately leaving him lacking an identity in every situation.

Another character that falls into the definition of a “character trapped in a middle ground” is Boori Ma. This character comes out of Lahiri’s story, “A Real Durwan.” This story serves as another point where the “first generation,” immigrant argument comes into play. Boori Ma is an old woman who wanders around stairwells, nostalgically playing back in her mind the life she left. She is defined immediately as the, “sweeper of the stairwell” (Lahiri70), and as the narrator tells us more about her, its told that, “It was with this voice that she enumerated, twice a day as she swept the stairwell, the details of her plight and losses suffered since her deportation to Calcutta after partition” (70). This sets the stage for the first part of Boori Ma’s progression and our argument in defining who she is. She at this point is a woman who has been stripped out of her homeland and family, just like in Mr. Pirzada’s journey, “At that time, she maintained, the turmoil had separated from her husband, four daughters, a two-story brick house, a rosewood almari, and a number of coffer boxes with skeleton keys she still wore, along with her life savings” (71). She is a woman who has no family, no money, no cultural connection, no way of escape, and lacks a homeland.

People in a modern world do not want to listen to those who have come before us and show such loyalty to the life that they used to live before coming to America. Growing up we encounter many difficulties with ourselfs and our self identity, but how can a person’s identity survive when it is stolen and misplaced in a land that is not yours in ways of language, ideas, and culture? There is many new generations being born all the time and it’s a great struggle for the people who came here from other countries but had their children here. The experience of being born and raised in America has diluted the cultural background of many Indian people and also of many other races as well. Growing up in America and wanting to fit in to the social standards can sometimes be a hard clash with an individuals background. The Das family is a symbol of both American and Indian cultures intermixing, and due to this, the family does not completely belong in either culture.

The Das family is Indian, but they have been socialized into American culture. These observations of the family’s American-like behaviors are seen through the eyes of the Indian tour-guide, Mr. Kapasi. Mr. Kapasi found it strange that Mr. Das should refer to his wife by her first name when speaking to the little girl” (337). Mr. Das was inquiring of the whereabouts of his wife, and did so by using her first name. The lack of Mr. Das’ term of respect for his wife, especially in front of his child, is shocking to Mr. Kapasi. Mr. Kapasi probably has been socialized to use respectful terms to refer to one’s wife, and this norm is emphasized when in the company of a young child who must likewise, understand the importance of respect. However, Mr. and Mrs. Das were raised in American, an individualistic society, and it is seen as normal, in American standards, for an individual to be called by her first name. It does not matter who the audience is as long as she is regarded as an individual. Of course, this is all very strange to Mr. Kapasi, who has not experienced American culture first-handed. However, Mr. Kapasi has been able to peak into American life through the watching of television programs. Lahiri writes, “Their [the Das family] accents sounded just like the ones Mr. Kapasi heard on American television programs” (339). The Das family spoke fluent English with the lack of an Indian accent, showing the displacement of their Indian heritage in their speech. The Das family has acquired English as their main language, and has long forgotten any Indian languages. We often see these type of families in the States and I think that since moving to New York City I have been greatly exposed to the diversity of culture and how families from other parts of the world adapt to the American “norms” and way of life. Having grandparents with thick accents while the parents and children have very common American accent is very much a normal thing to hear now a days and even more so a grandchild that speaks only English while their grandparent only speaks their native tounge. Language is important as it connects to one’s cultural knowledge, and since the Das family knows English well, they are able to take on the behaviors and norms of the American culture, yet their lack of knowledge of any Indian languages subsequently causes their lack of knowledge of Indian culture. Another great difference with the Indian culture and the American is that the marriges are not arranged and though not every single India marriage is arranged it is not common for an Indian woman to choose her own husband on her own. In Interpreter of Maladies Mrs. Das makes it known that she was married at a young age, which is seen normal in Indian culture, but is not encouraged in American culture. Americans would see it ideal for women to complete their education, and establish their own economic well-being before agreeing to marriage. The Das family represents the intermixing of American and Indian culture. The family displays distinct American cultural norms from their individualistic terms of respect, accent, and the Barbie doll Tina plays with. Yet, the family also displays unique Indian values such as getting married young, having an arranged marriage, and the importance of big families. Due to this dualism of partial belonging in distinct cultures, the Das family can never fully associate with a culture, which means there is nowhere that they truly belong.

I am highly curious of how you can place people who are poor or not in a favorable situation and put them in a country that has wealth and better situations to offer. How does it change the person and how does it change their ideas and their wants? Jhumpa Lahiri recognizes the most important key of individual emotional need and intertwines this reoccurring theme throughout her literary works. In the short story, “Interpreter of Maladies,” Jhumpa Lahiri utilizes Mr. Kapasi and Mrs. Das’s symbiotic relationship to emphasize the significance emotional connectedness plays in human fulfillment, consequently bringing to light the repercussions of seeking compensation for emotional deficits with a thirsty heart.

Analysis of Book "Interpreter of Maladies". (2021, Aug 06). Retrieved from http://studymoose.com/analysis-of-book-interpreter-of-maladies-essay 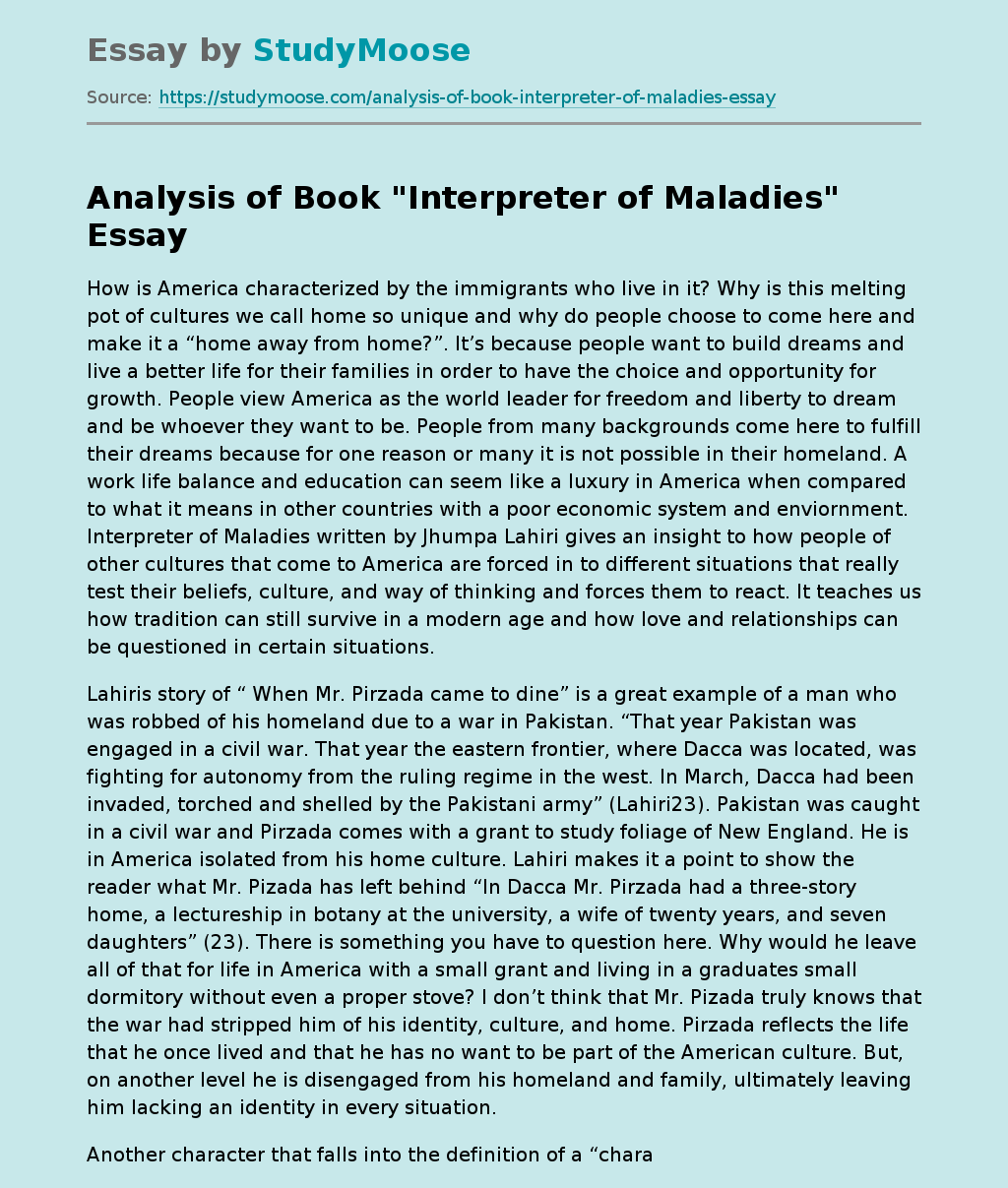