Analysis of an Ethical Dilemma

There are times when life takes an unforeseen route, and one is faced with an obstacle or situation that was not expected. Many people are diagnosed with terminal diseases, have accidents and are left with severe impairments, and suffer horrendous complications from medical issues. One has the right, according to law, to make medical decisions about their care and treatment options. But should one have the right to end their life? Assisted, or voluntary euthanasia, is the direct administration of a lethal agent to end one’s life at the request of the patient (Tamayo-Velazquez, Simon-Lorda, & Cruz-Piqueras, 2012, p.

678). Should a person have to intolerably suffer for the duration of their disease or disability, or should they have the right to choose to end their life?

Voluntary euthanasia naturally sparks the debate between “morality and legality” (Young, 2010). Ethical implications come with being faced with if assisted euthanasia is morally justified, or if respecting one’s right to make choices about their life, including end of life decisions, supersedes all other aspects of the subject.

Nurses are an integral part in end of life care of patients, and often times are witness to those expressing the desire to die. Ethical dilemmas are currently high regarding end of life care in nursing, and would only grow more complicated and severe if assisted euthanasia became legal worldwide, as nurses would not only provide comfort measures, but rather be a part of ending life. Currently, assisted euthanasia is legal in three countries; the Netherlands, Belgium, and Luxembourg.

Euthanasia is considered murder in every other place in the world. (“Assisted Suicide & Death with Dignity,” 2013).

In the United States, there are currently three states, Oregon, Montana, and Washington, where Physician Assisted Suicide, or PAS, is legal. PAS is referred to as the “Death with Dignity Act “and permits doctors to prescribe a lethal overdose to a patient who is expected to die within six months. This decision is totally dependent upon patient wishes, and physicians are not obligated to inform families, only to write the prescription (“Analysis of Assisted Suicide Initiative,” 2013). In any other state, assisted suicide is considered manslaughter and is punishable by law. Assisted euthanasia remains a hot topic worldwide, and aims to pass laws are constantly challenged. Ethical Theories Ethical decisions are always difficult for the nurse to make in a challenging situation Confidentiality and privacy are part of ethical issues but can raise confusion as to the best direction of an action for a nurse to take.

There is a need for nurses to know that patient obligations and laws concerning privacy and confidentiality matters. Healthcare has the HIPAA law that guides patient’s privacy (HIPAA. ORG, 2008) which is essential for nurses to understand the pertinent guidelines or rules on confidentiality so as to carry out their practices based on the law guidelines. The code of ethics states, “The nurse advocates for, promotes and strives towards safety, health and the patients’ rights (ANA, 2010). (ANA, 2010) stated that Deontology theory is helpful for the nurse to judges the morality of an action based on the action’s adherence to rules. Whether an action is ethical depends on the intentions behind the decisions rather than the outcomes that result. Beneficence represents compassion on the other hand, taking positive action to help others and desire to do good which is the core principle of our patient advocacy. (Butts, J. B., & Rich, K. L, 2008). Autonomy theory help nurses respect and honor a patients or clients right to make a course of action and support independent decision making.

While the right to autonomy is not to hurt or negatively impact an outcome, it often gives the nurse a sense of freedom to choose a moral decision. Voluntary assisted euthanasia may be justified with the Beneficence theory but ethically wrong for the nurse in assisting. Impact of social valves, morals, and norms The Terry Schiavo case was perhaps the highest profile case to ever address the issue of prolonging one’s life when that person suffers a life-altering medical tragedy. With her husband fighting on one side for the right to not prolong her life and multiple parties, including her other family members, fighting for the right to prolong her life, this case took national media and even the courts by storm.

The case brought to light what has been called the “right-to-die” question. Because she lacked a living will, the courts were left to determine what her finals wishes would have been in a situation like this. Legally speaking, the court in Florida found that people have the right to refuse medical treatment, and that right extends to them even when they are in a vegetative state. This case was complicated because there was no clear consensus on whether Schiavo would have liked to exercise that right. Ultimately, her husband was able to convince the court of this, and his persuasiveness came largely because he was the closest person to her and was thus in the best position to understand her wishes.

The case brought about complicated ethical issues, especially for the medical professionals involved. Nurses and doctors are under an oath to preserve life whenever possible, but they must also respect the wishes of patients. Because the decision involved removing a feeding tube rather than taking any direct action to harm the patient, medical professionals were able to comply with court orders without violating their oath.

It is also worth noting that this case was complicated by social and political issues. Pro-life groups advocated on behalf of Schiavo’s family, and President George W. Bush even tried to intervene. Some argue that these things were designed to make a political point. Implementing an ethical theory Implementing an ethical theory or principle to address an ethical dilemma should involve identifying the type of ethical problem. Doing this lays the groundwork for the trajectory in the caring response. From here, an ethical theory can be implemented and methodically followed to conclude with the best caring response. In the case of Terry Schiavo, there were ambiguities of who should make the decisions. With this, a locus of authority was established to this ethical problem and ultimately, the Supreme Court would act as the moral agent. With the trajectory set, the Supreme Court was now going to be held responsible for the caring response outcome.

Furthermore, the Courts would likely have to rely on a narrative approach to ethical decision making. Purtilo and Doherty (2011) define the narrative approach as information told through stories that, as a result, affect the human experience. With the barrage of coming from the Schiavo case, the Supreme Court must be sure to gather all the relevant details in order to establish facts, relationships and values. Consequently, this is the first step in many ethical theories as well as Purtilo and Doherty’s (2011, p. 103) six steps to ethical decision making. The determination of an ethical decision in deeply rooted in personal and societal values. The ethical theory provides the framework, but it is the value-laden details that guide the decision (Aulisio & Arnold, 2008). With this said an accurate prediction with regard to cases such as Terry Schiavo would be the immediate intervention of ethics committees to mitigate lengthy legal processes and preserving a caring response.

In this case all of the moral and social valves that were implicated involved nursing ethics. Nurses play an important role in caring for patients that are at the end of life. Nurses must understand the issues that involve assisted euthanasia because of the legal and ethical implications that are involved. Nurses must have adequate knowledge and understanding of assisted death to prevent themselves from violating their personal and professional ethics.

Analysis of an Ethical Dilemma. (2016, Mar 13). Retrieved from http://studymoose.com/analysis-of-an-ethical-dilemma-essay 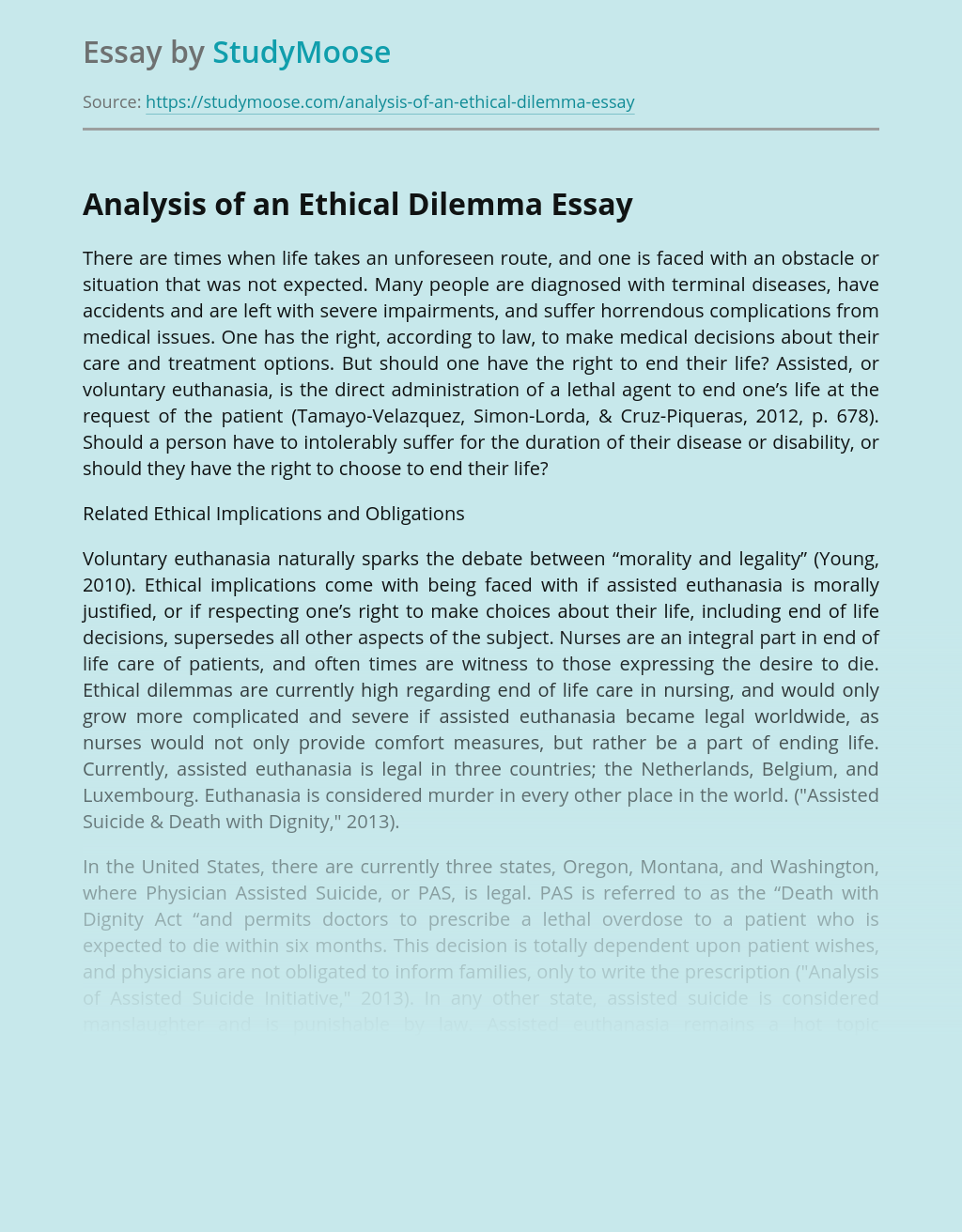 Don’t waste time
Get a verified writer to help you with Analysis of an Ethical Dilemma
Hire verified writer
$35.80 for a 2-page paper
Stay Safe, Stay Original