Analyse the effects of inflation on an economy

Inflation impacts on many facets of the economy, these impacts can be both long and short term. It is generally the case that higher levels of inflation carry more severe consequences thus it is often the aim of government to sustain a low level of inflation. Inflation effects economic growth and certainty, wages, unemployment, international competitiveness, exchange and interest rates amongst other things.

High inflation can be a major constraint on economic growth and certainty which ultimately impacts upon international competitiveness.

Turn in your highest-quality paper
Get a qualified writer to help you with
“ Analyse the effects of inflation on an economy ”
Get high-quality paper
NEW! AI matching with writer

High inflation distorts economic decision making as producers and consumers change their spending and saving patterns to minimise the potential impact of inflation upon themselves. High inflation means consumers are more likely to spend their money rather than save due to the purchasing power of their money reducing over time, on the other hand business investment is discouraged as future profit levels become uncertain. This lack of business investment results in increased export prices and thus reduced international competitiveness and quantity of exports, simultaneously consumers are more likely to switch to import substitutes, worsening the trade deficit.

On the contrary however, low inflation leads to increase in business investment and consumer saving leading to the improvement of international competitiveness, making Australian products more attractive for purchase. Ultimately lower inflation rate leads to positive impacts upon economic growth, creates a greater sense of certainty, leads to an expansion of exports and replaces imported substitutes with domestic products, thus improving the trade deficit. Thus from this we can draw out that the implications of high inflation impacts negatively whilst lower inflation can hold many positive consequences for the economy.

The level of inflation has major impacts on both the level and the distribution of incomes. Nominal wage demands are majorly influenced by the level of inflation as employees preemptively seek larger wages, so as to compensate for the erosion of the purchasing power of their nominal wage. This can in extreme cases lead to a wage-price inflationary spiral that often becomes difficult to break, as wage increases lead to price increases which then becomes a constant cycle. Tied to this is the fact that inflation often leads to greater inequality as low income earners wages do not rise as quickly as prices.

Additionally inflation often leads to a rise in interest rates which would effect low income earners proportionately more. Higher levels of inflation also leads to the erosion of savings, therefore individuals who are unable to protect their savings from inflation would experience a significant decline in net wealth. Thus it can be seen that inflation effects wages but often at a much slower pace for low income earners, this amongst other factors leads to greater income inequality.

This was evidenced in the global financial downturn of 2009 when global interest rates reached record lows globally. Low inflation positively impacts upon the exchange rate as it fosters greater international confidence in Australia thus strengthening the Australian dollar. From this it can be drawn that high inflation in the long term has a significant negative impact upon exchange and interest rates whilst lower inflation generally impacts more positively upon interest and especially exchange rates and thus upon the economy.

Analyse the effects of inflation on an economy. (2016, Apr 03). Retrieved from https://studymoose.com/analyse-the-effects-of-inflation-on-an-economy-essay 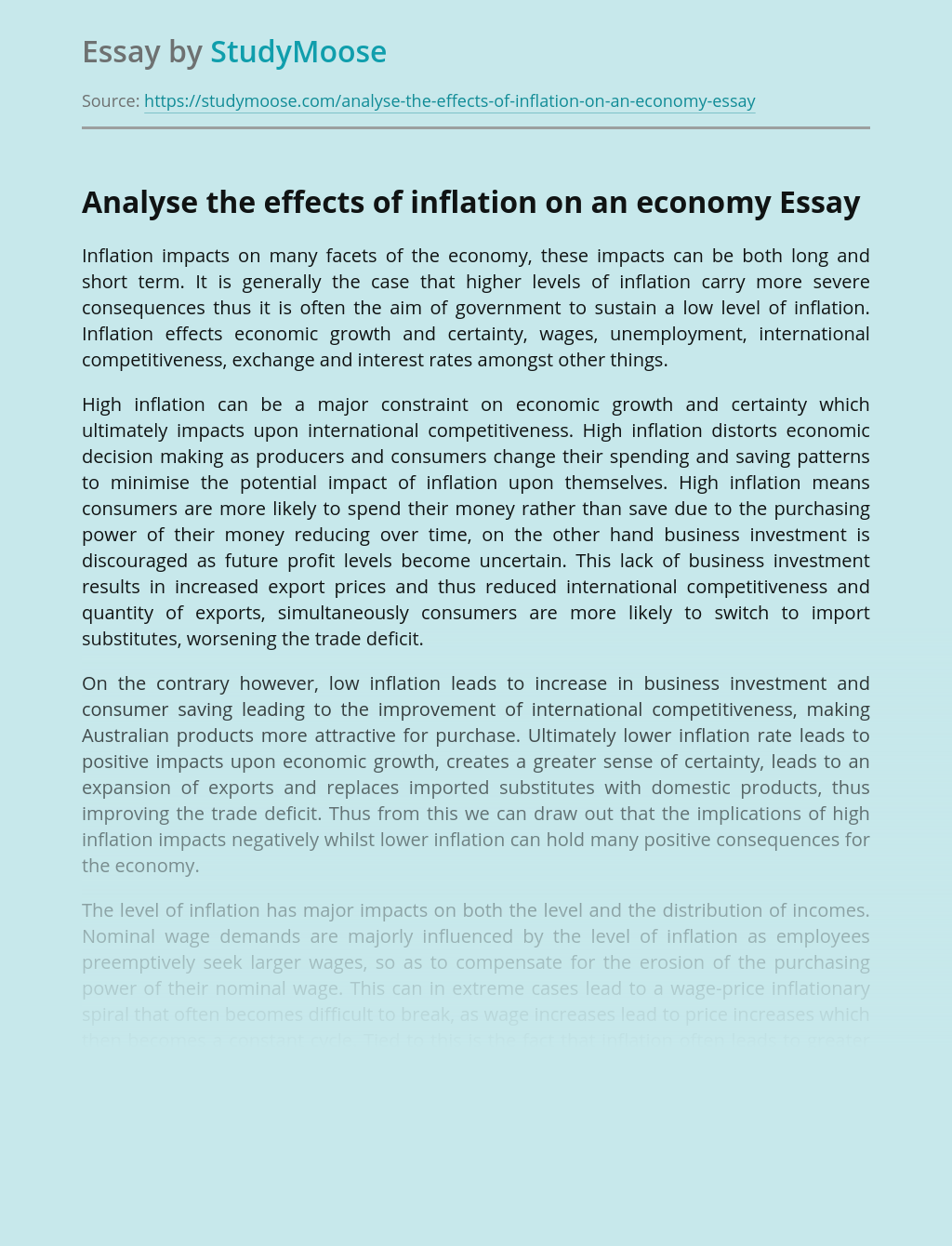 Turn in your highest-quality paper
Get a qualified writer to help you with
“ Analyse the effects of inflation on an economy ”
Get high-quality paper
Helping students since 2015
Stay Safe, Stay Original