An outsider and alienated in society

An outsider is a person who does not belong to a particular group, who is not accepted and is consequently isolated. However, to not belong can be detrimental as we all have an intrinsic need to belong. To belong implies an understanding of the needs of the individual and the group and negotiating a way towards acceptance of those needs. On the other hand, exclusion occurs when the individual and the group fails to understand one another, which can be detrimental.

Don't use plagiarized sources. Get your custom essay on
“ An outsider and alienated in society ”
Get custom paper
NEW! smart matching with writer

These ideas are demonstrated in Alex Buzo’s play “Norm and Ahmed” and in the poem “Kimberley” by Jackie Kay.

Often we search for a sense of belonging to place and when we do not find it, we are not fulfilled. In the play, “Norm and Ahmed” Ahmed, an Indian, has little connection to Australian culture and therefore sees himself as an outsider. This is immediately evident in the way he dresses in his traditional Nehru style suit which is juxtaposed to Norm, an Australian, who wears typical male western style of clothing of “open-necked white shirt and grey trousers.

” To remind Ahmed that he is an outsider, Norm repeats the phrase “a visitor to this country”, and he also assumes that all South Asian people are Indians, stereotyping India as an uncivilised country filled with dangerous “Bombay stranglers”.

This metaphor shows that Norm makes sure that Ahmed is regarded as an outsider by talking in a superior tone and debasing India through juxtaposition and contrast of Sydney and Bombay as “this isn’t India mate, you’re in Sydney……you’re quite safe”.

Furthermore, Norm is constantly reinforcing Ahmed’s ethnicity and feelings of being an outsider through derogatory terms such as “boong” and “chow” because he himself feels confident in being an insider of the Australian culture. Norm’s body language described in strong present participles as “prowling” “circling” and “grabbing” and stage directions reinforce Norm’s confidence and intimidation telling Ahmed that he is an outsider. Norm believes that Ahmed is not entitled to make judgements about Australia stating “I wouldn’t throw my weight around in someone else’s country.”This shows that a person of a different ethnic background will be made to feel an outsider and alienated if those of the main culture do not make an effort to include them.

An outsider and alienated in society. (2016, Apr 01). Retrieved from https://studymoose.com/an-outsider-and-alienated-in-society-essay 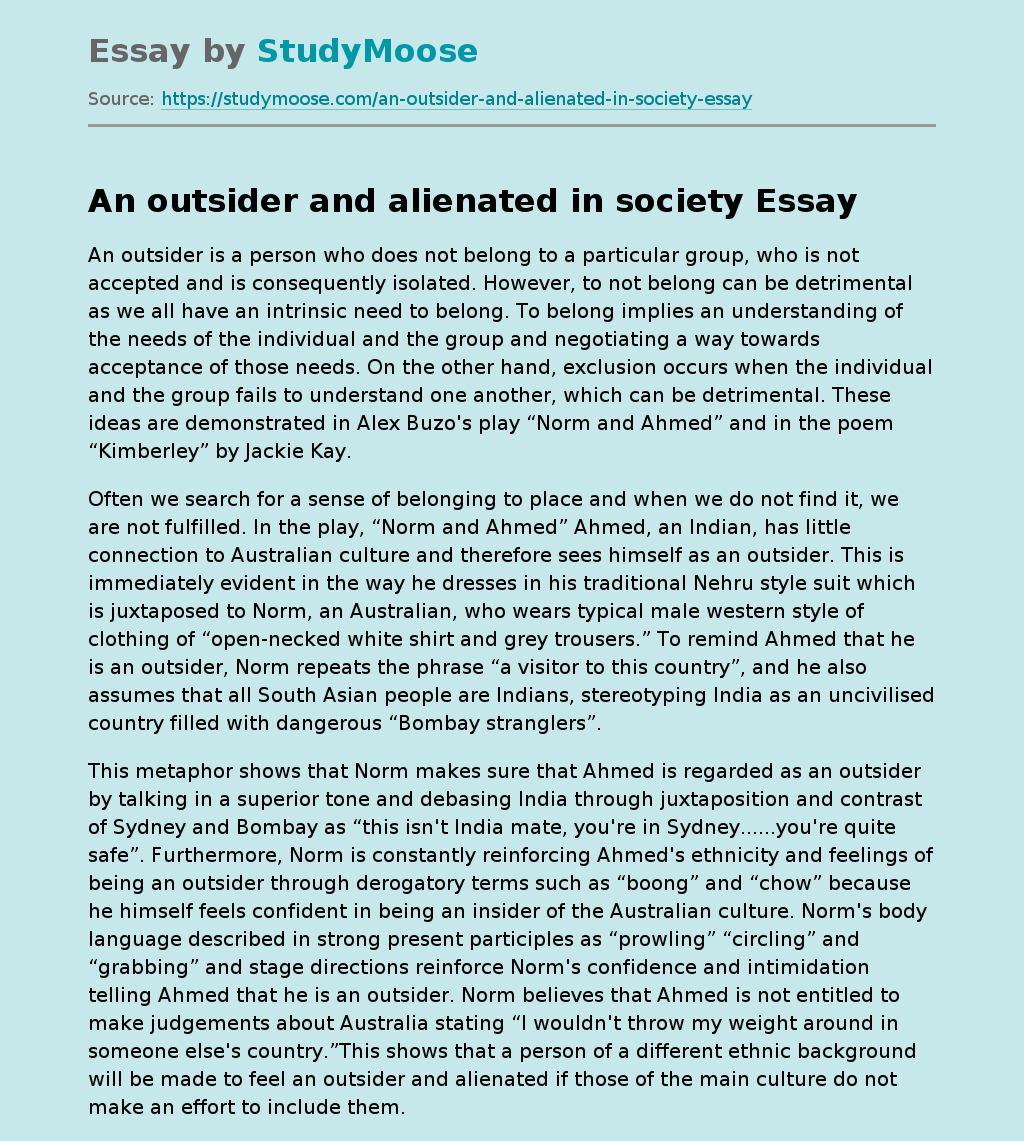