Everyone have their own idol. An idol defined as someone that we admired and respected very much. We proud with his achievement and his attitude towards everyone besides idol can be a good role model to us. The person that we can take them as our example to succeed in our life. P.Ramlee is one of artise who successful and achieve many awards in his career. Let’s talk about his background first. The real name of P.Ramlee is Teuku Zakaria Bin Teuku Nyak Puteh.

Don't use plagiarized sources. Get your custom essay on
“ An Idol and Role Model P Ramlee ”
Get custom paper
NEW! smart matching with writer

He was born in Penang at his grandmother’s house on 22nd of March 1929, on the Wednesday morning of Aidilfitri for that year. P.Ramlee’s father is Teuku Nyak Puteh Bin Teuku Karim who was an immigrant, a sailor from Lhoksemauwe in Acheh, Indonesia while his mother’s name was Che Mah Hussein, originated from Kubang Buaya, Seberang Perai, Penang. For our information, P. Ramlee had a step brother who is Sheikh Ali Mohamad who shared a same mother with P.

Ramlee, who was Che Mah Hussein. P.Ramlee received his early schooling at the Malay School in Kampung Jawa and later at the Francis Light School until standard five. He subsequently continued his education at the Penang Free School.

During the Japanese Occupation of Malaya, he was unable to continue with his schooling. In order to make a living, he worked as an office boy at a tine mine. At the same time, he also enrolled at the Japanese Army School and had brief opportunity to acquaint himself with the Japanese language and music.

His hardworking and friendly disposition made him popular with the Japanese soldiers. When World War II ended, P. Ramlee continued his schooling at the Penang Free School, up to standard seven. He was active in sports and had a liking for football and sepak raga in 1939, he represented his school in the football team.

Moreover, P. Ramlee had a great love for the arts. He was born with an artistic flair. That was an undeniable fact and it was obvious even in his early youth. Starting his familiarization in the musical arts at the age of around 13, the Ukelele and Violin were among the early instruments he took up.He displayed his musical talents with contemporary songs and melodious ‘Keroncong’ tunes together with his friends. It was through this that he received his first commission from Radio Malaya to entertain at social gatherings and events around Penang.

P. Ramlee’s affinity for singing and music overshadowed his academic studies at school, this is widely attested to by the teachers who taught him. While singing at official functions, P. Ramlee would often be accompanied by a band, such as the Pancaragam Teruna Sekampung (All Kampung Youth Orchestra) and the Bintang Sore. His melodies voice soon became the talk of the town and soon many wanted to know more about his new star, a thin and pimple faced teenager. Besides became a singer, P.Ramlee also involved in directorate films.

The beggining of this career where when he was in Singapore, his voice was initially used in background songs for Malay films. P.Ramlee was also a clapper boy and camera assistant. Noticing his interest and affinity for acting, his superiors auditioned him and eventually gave him small parts in films. The first film in which P. Ramlee had a role in was Chinta, released in 1948. Consequently, after acting in some 20 films, P.Ramlee eventually ventured into film direction, with his first effort Penarik Beca which was released in 1955. P.Ramlee is a great guy. He can be a singer, actor, composer and a director. His song and his voice very popular in Singapore. He is a abilities guy and a kind man. He loved to help people who asks his help. Although he is a well known guy, he never arrogant with his achievement.

Many people liked with his behaviour towards anyone around him. On 1950, P.Ramlee married a woman who is Junaidah Daeng Harris , daughter of actor, Daeng Harris. Married in the early 50’s after the film Bakti, their relationship fell apart even though they had a child, Nasir. In February 1955, he get married for the second time with a woman who is Norizan. Unfortunately, his marriage failed for the second time and ended in divorce. Failure in a marriage does not discourage his spirit. Later on, P.Ramlee met a singer named Salmah Ismail whose stage name was Saloma.

They got married in November 1961 in Tembeling Road, Singapore. Nevertheless, this third marriage was considered an ideal match because they were so right and suitable for each other, even in their duets. Moreover, P.Ramlee had gave many contribution to this country. Even after his death, we celebrate and appreciate his effort, and his achievement. For sure, P.Ramlee really deserved to be an idol to everyone. He had prove that, if we have a spirit to successful in our life and give effort on it, for sure, we can make it become a reality. Our teenagers should followed P.Ramlee’s step. What he doing untill he success in his life. Last but not least, we should remember his duty to our country.

An Idol and Role Model P Ramlee. (2016, May 06). Retrieved from http://studymoose.com/an-idol-and-role-model-p-ramlee-essay 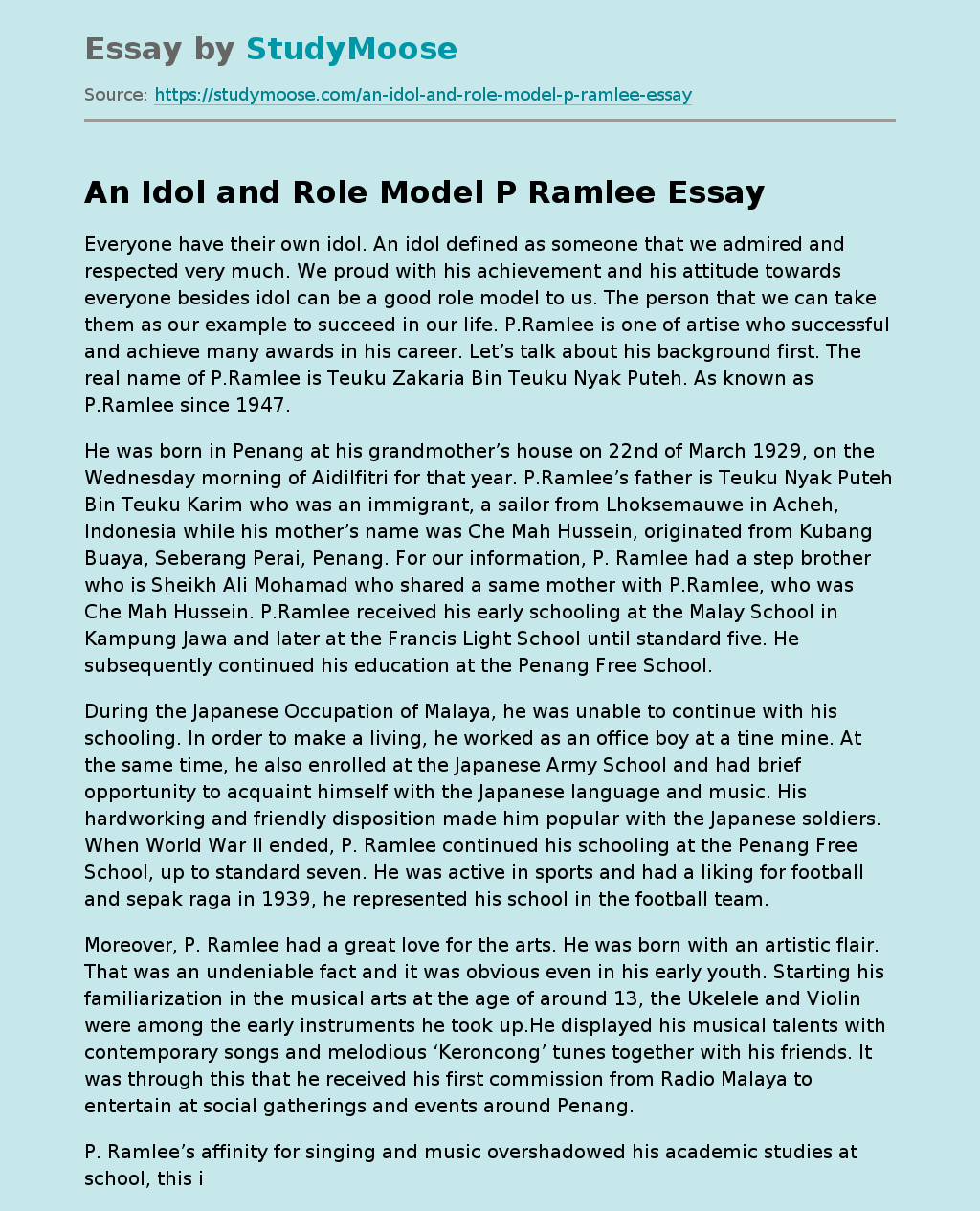