The story the “Idol House of Astarte” is just one of the stories that appeared in Dame Agatha Christie’s “The Thirteen Problems” (1932, 2000)(also published as “The Tuesday Club Murders. “) Ms. Jane Marple, one of Christie’s most beloved characters is the village old maid who has a knack for observing parallels between situations (Bargainnier 42). She along with her playwright nephew Raymond West, the artist Joyce Lempriere, Scotland Yard’s Sir Henry Clithering, the elderly clergyman Dr. Pender and the solicitor Mr.

Don't use plagiarized sources. Get your custom essay on
“ Agatha Christie’s “The idol house of Astarte” ”
Get custom paper
NEW! smart matching with writer

Petherick are featured telling accounts of puzzling situations and crimes they have experienced (Christie 1).

To each story, the storyteller withholds the solution to the how the crime was solved and how it was committed. The challenge to the listeners is to guess the answers to the question of how the murders or crimes were committed and by whom. (2) “The Idol House of Astarte” (15-30) is the story shared by Dr. Pender. In it, he recalls the experience he had and the murder he witnessed at a party at the house of a Sir Richard Haydon on Dartmoor.

The house itself, while unremarkable in appearance, was said to be built on a location full of history including that of the Neolithic hut dwellers, the Druids, Romans and early Phoenicians.

On the grounds is a peculiar piece of land with a dense crop of trees, which Haydon thought to be the sacred grove of a Phoenician goddess of the moon, Astarte. The sight and eerie atmosphere of the grove inspired one of the guests, an actress called Diana Ashley to suggest a Fancy dress or costume party for that evening.

In the course of the evening, the house party dressed in their costumes once again venture to the grove and encounter a surprise in the form of a fully costumed Diana Ashley who was acting the part of a priestess at the goddess temple.

In excitement, Sir Richard Haydon attempts to approach Diana, stumbles and then falls forward. When he doesn’t get up, his cousin Elliot investigates what happened and announces that Richard was dead apparently from a stab wound. Despite searching for a weapon or possible reason for Haydon’s death, none could be found. The next day, Elliot Haydon was also found stabbed but alive in the same position as Richard was. The difference was that a dagger was left in the wound. According to him, something supernatural happened in the grove and that his wound was inflicted by something he could not explain.

The story goes on to detail the many solutions Ms. Marple’s party offers up for the deaths. Most of which considered the supernatural and superhuman. Of them all, only the lawyer Mr. Petherick and Ms. Marple offered solutions that completely discounted the supernatural. In the end, it was Ms. Marple who came upon the correct answer to Dr. Pender’s mystery. There were many factors that made the story mystical. The story itself carries many suggestions of supernatural things such as magic and ghosts.

Much mention has also been given to the “atmosphere” of the grove, which was often described as spooky or creepy. There was also of course the setting, which was in a clearing in a dense crop of trees and the time at which the murder happened which was a night with a rising moon (20). There was also the eerie dark punctuated with whispers and sighs, and the small summerhouse or “temple” at the clearing itself where a stone statue of the goddess Astarte was enshrined. The atmosphere of evil and foreboding enveloped the characters in the house party.

Ms.Marple’s group was also invariably influenced by the eerie nature of the story and Dr. Pender’s description of how he felt on seeing the grove as well as the events as they unfolded. I think this very “atmosphere” itself plus the mere fact that a clergyman such as Dr. Pender could be affected by such “evil” atmosphere, hindered the characters in the house party including some members of Ms. Marple’s group in their objective and sober assessment of the facts. In fact, I believe Ms. Marple stated it best when she said: I don’t see how anyone else could have done it…I mean if, as Mr.

Petherick so wisely says, one looks at the facts and disregards all that atmosphere of heathen goddesses which I don’t think is very nice. (Christie 29) I also found it interesting that the more “artistic” in Ms. Marple’s group such as Raymond West and Joyce Lempriere, were more susceptible to thinking up solutions of a supernatural nature such as seances and superhuman strength used in throwing a javelin. Sir Henry Clithering, while not completely taken in by the supernatural, did consider the possibility of murder done by a professional and exceptionally talented dagger of knife thrower.

(27) Owing to his profession as a solicitor, Mr. Petherick was more trained to evaluate facts without the influence of atmosphere. Ms. Marple, besides being a “matter-of-fact” sort of person, has the wealth of her experience and observations of living in a village that she can build her judgment on. Profession and experience seem to be used as indicators and measures of each character’s objectivity and imagination. Both Ms. Christie and the character Dr. Pender are wonderful storytellers.

The description of the grove and the feelings it created in those who visited it shows just how important atmosphere can be not only in a story (Bargainnier 28) but also in influencing how people think, feel, and view things. 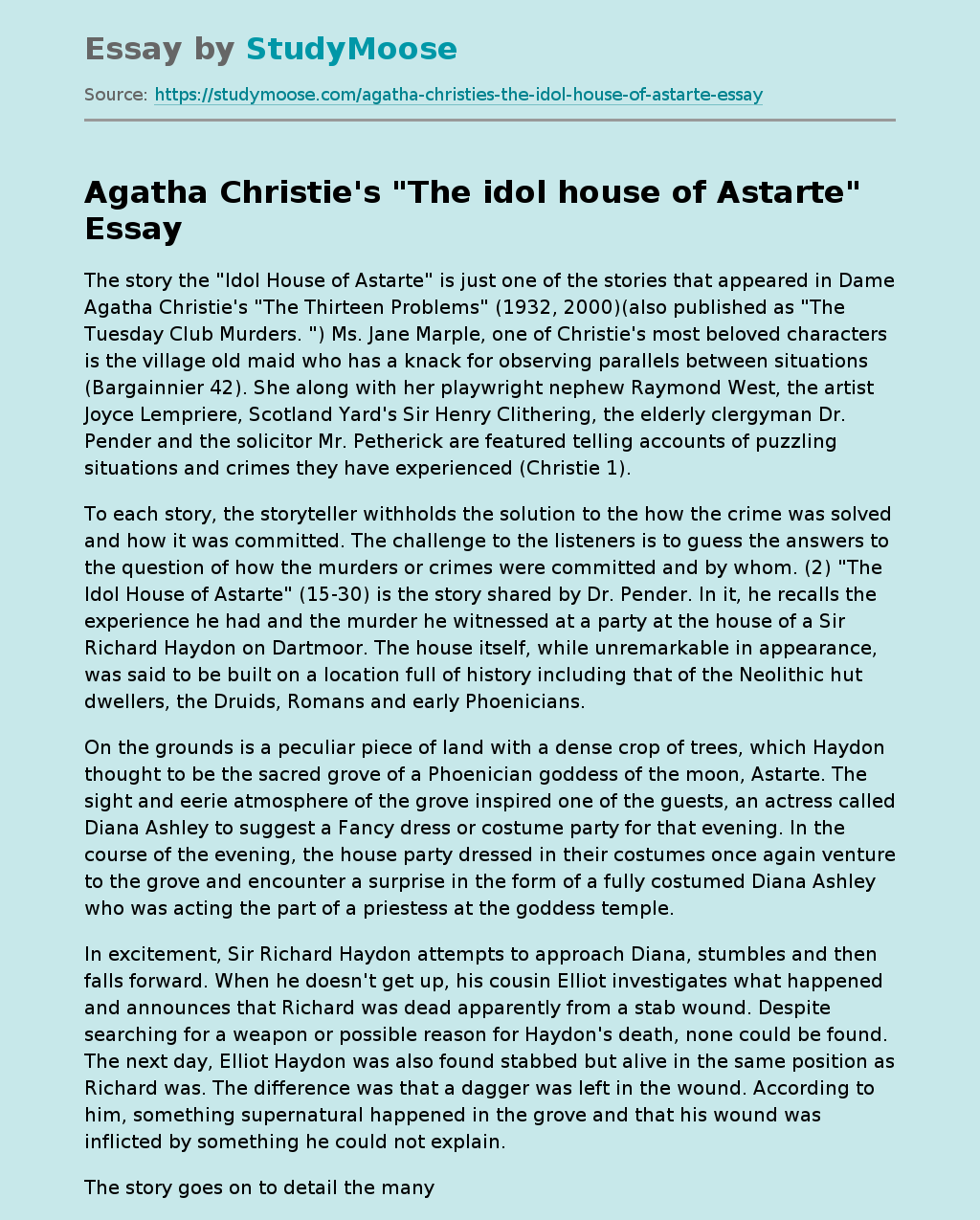