Introduction and History of X Factor and American Idol

The X Factor is a television talent show franchise originating in the United Kingdom, where it was devised as a replacement for Pop Idol. It is a singing competition, now held in various countries, which pits contestants against each other. These contestants are aspiring pop singers drawn from public auditions. The programs are produced by executive producer Simon Cowell and his company Syco TV. The “X Factor” of the title refers to the undefinable “something” that makes for star quality.

The prize is usually a recording contract, in addition to the publicity that appearance in the later stages of the show itself generates, not only for the winner but also for other highly ranked contestants.

Don't use plagiarized sources. Get your custom essay on
“ Introduction and History of X Factor and American Idol ”
Get custom paper
NEW! smart matching with writer

The format creator is Simon Cowell who also judges and mentors on the UK series. The UK version is responsible for the launch of the internationally successful singer Leona Lewis. As of May 2011, there have been 48 winners of The X Factor around the world. Television stations in many countries, but especially the Scandinavian ones, have expressed an interest in showing the UK version, but have not been able to acquire the rights.

This is due to legal issues as the British version of the show is only available in the UK and Ireland. The X Factor has recently completed its seventh series. Unlike Pop Idol, where contestants are solely judged by the judges, on The X Factor each judge mentors the finalists in a particular category, aiding them with song selection and styling, while also participating together in judging the contestants of the other categories.

In the initial televised audition phase of the show, contestants sing in front of the judges. The original judging panel was Cowell, Sharon Osbourne and Louis Walsh.

In 2007 Dannii Minogue joined the panel, and Cheryl Cole replaced Osbourne in series 5 after her departure. After series 7, Cowell and Cole both left to judge the American version of the show whilst Dannii Minogue left the show due to commitments on Australia’s Got Talent. From series 6 onwards, auditionees sing in front of a live audience. Successful auditionees go through to “bootcamp” and then “judges houses”, where judges narrow down the acts in their category to 3 or 4 acts to mentor for the live shows, where the public vote for their favourite acts following weekly live performances by the contestants.

There have been seven winners to date: Steve Brookstein, Shayne Ward, Leona Lewis, Leon Jackson, Alexandra Burke, Joe McElderry and Matt Cardle. The winning contestant’s single is released in time for the end of year chart battle for the UK’s Christmas number one, a spot which was gained in 2005, 2006, 2007, 2008 and 2010. All of the winners’ singles have gone on to achieve the number one chart position nevertheless, with Brookstein and McElderry going on to claim the New Year’s number one spot a week later instead.

As of December 2010, a total of 17 number-one singles have been released by artists who have appeared on the show. The all-new X Factor champion receives a recording contract with record label Syco Music with a stated value of ?1,000,000. This includes a cash payment to the winner, but the majority is allocated to marketing and recording costs. American Idol (also known as American Idol: The Search for a Superstar) is a reality television singing competition created by Simon Fuller and produced by FremantleMedia North America and 19 Entertainment, which began airing on Fox on June 11, 2002.

Part of the Idol franchise, it is a spin-off from the UK show Pop Idol. The concept of the series is to find new solo recording artists, and has since become one of the most popular in the history of American television. As of January 2011, it is the most-watched TV series in the Nielsen ratings and is the only program to have been number one for six consecutive seasons, surpassing All in the Family and The Cosby Show, which were both number one for five consecutive seasons. The program aims to discover the best singer in the country where the winner is determined by the viewers.

Since January 2011, the judging panel currently consists of Jackson, award-winning singer/actress and record producer Jennifer Lopez and Aerosmith frontman and Grammy Award-winning singer-songwriter Steven Tyler. For all seasons the show has been hosted by radio disc jockey Ryan Seacrest. The show was described by rival TV executives as “the most impactful show in the history of television. ” It has also become a recognized springboard for launching the career of many artists as bona fide stars. As Entertainment Weekly puts it, “It’s given us Kelly, Carrie, Daughtry, and J. Hud. Idol rules the reality roost because the winners of Fox’s ratings juggernaut actually do go on to greatness. History of X Factor X Factor began in 2004 as a replacement for the popular TV talent contest Pop Idol. The winner each season earns a one million pound sterling recording contract. The current judges for X Factor are music executive Simon Cowell, Girls Aloud member Cheryl Cole, music manager Louis Walsh, and singer Dannii Minogue. The winner’s first single is released just before Christmas and in recent years has been successful at becoming the Christmas #1 hit.

G4 performed in the popera style combining pop and opera sounds. Their version of Queen’s “Bohemian Rhapsody” hit the top 10 on the pop singles chart and their first two albums were also top 10 hits. Steve Brookstein sing “Against All Odds” * Season Two – 2005 (Shayne Ward sing “That’s My Goal”) The judges for the second season of X Factor were again Simon Cowell, Louis Walsh, and Sharon Osbourne. The final came down to Shayne Ward and Andy Abraham. Shayne Ward won and has gone on to have four top 10 pop singles in the UK and two albums which reached #1 and #2 on the album chart. Both have been certified platinum for sales.

Andy Abraham reached the top 20 with one single and his debut album hit #2. * Season Three – 2006 (Leona Lewis sing “A Moment Like This”) The judges for the third season of X Factor were again Simon Cowell, Louis Walsh, and Sharon Osbourne. The final two contestants were Leona Lewis and Ray Quinn. Leona Lewis won and has become an international superstar. She has five top 10 singles in the UK including three #1’s. Her single “Bleeding Love” hit #1 in the US and in countries around the world. Her debut album was also a #1 hit around the world. Ray Quinn’s debut album in the jazz style reached #1 on the album chart.

He was a winner in 2009 of the UK reality series Dancing On Ice. * Season Four – 2007 (Leon Jackson sing “When You Believe”) The composition of the judges panel generated controversy for season four of X Factor. When the dust settled the four judges were Simon Cowell, Louis Walsh, Sharon Osbourne, and Dannii Minogue. The top two of season four turned out to be Leon Jackson and Rhydian Roberts. Leon Jackson won and has gone on to release two top 10 pop singles. His debut album reached #4 on the chart. Rhydian Roberts’ debut album reached #3 on the album chart. * Season Five – 2008 (Alexandra Burke sing “Hallelujah”)

The show ended up with arguably the strongest final four contestants yet. Joe McElderry ultimately was named the champion. However, his winning single, a version of Miley Cyrus’ “The Climb,” failed to debut at #1 due to an Internet-based campaign to deny X Factor the traditional Christmas #1. Season Seven – 2010 Season seven of X Factor took place with the same lineup of judges as the previous season. However, due to Dannii Minogue’s absence on maternity leave and Cheryl Cole missing a number of auditions battling malaria, a series of celebrity guest judges made appearances.

The show adjusted the rule on age groups and extended the upper limite for the boys and girls groups to 28 with an intent to put more similar performers together. Ultimately the final came down to a battle between Matt Cardle and Rebecca Ferguson. He took home the title becoming the fifth male performer to win out of seven seasons. History of American Idol American Idol was created based on the British show Pop Idol, which was in turn inspired by Popstars, a show TV producer Nigel Lythgoe saw in Australia and brought over to Britain.

Using the idea from Popstars of employing a panel of judges to select singers in audition, and adding other elements such as telephone voting by the viewing public, which at the time was already in use in shows such as the Eurovision Song Contest, Simon Fuller then created the show Pop Idol. The show debuted in 2001 in Britain with Nigel Lythgoe as the producer and Simon Cowell as one of the judges, and was a big success with the viewing public. Simon Fuller and Simon Cowell attempted to sell the Pop Idol format to the U. S in 2001, but the idea was met with poor response from U. S. TV networks.

However, Rupert Murdoch, head of Fox’s parent company, was persuaded to buy the show by his daughter Elisabeth who was a fan of the British show. The show was renamed American Idol: The Search for a Superstar, debuted in the summer of 2002, and became one of the summer hit shows that year. The show, with the personal engagement of the viewers with the contestants through voting, and the presence of the caustic-tongue judge Simon Cowell, grew into a phenomenon. By 2005 it had become the biggest show on U. S. TV, a position it then held on for six straight years. The show is currently scheduled to remain on air until 2011.

Introduction and History of X Factor and American Idol. (2020, Jun 02). Retrieved from http://studymoose.com/introduction-history-x-factor-american-idol-new-essay 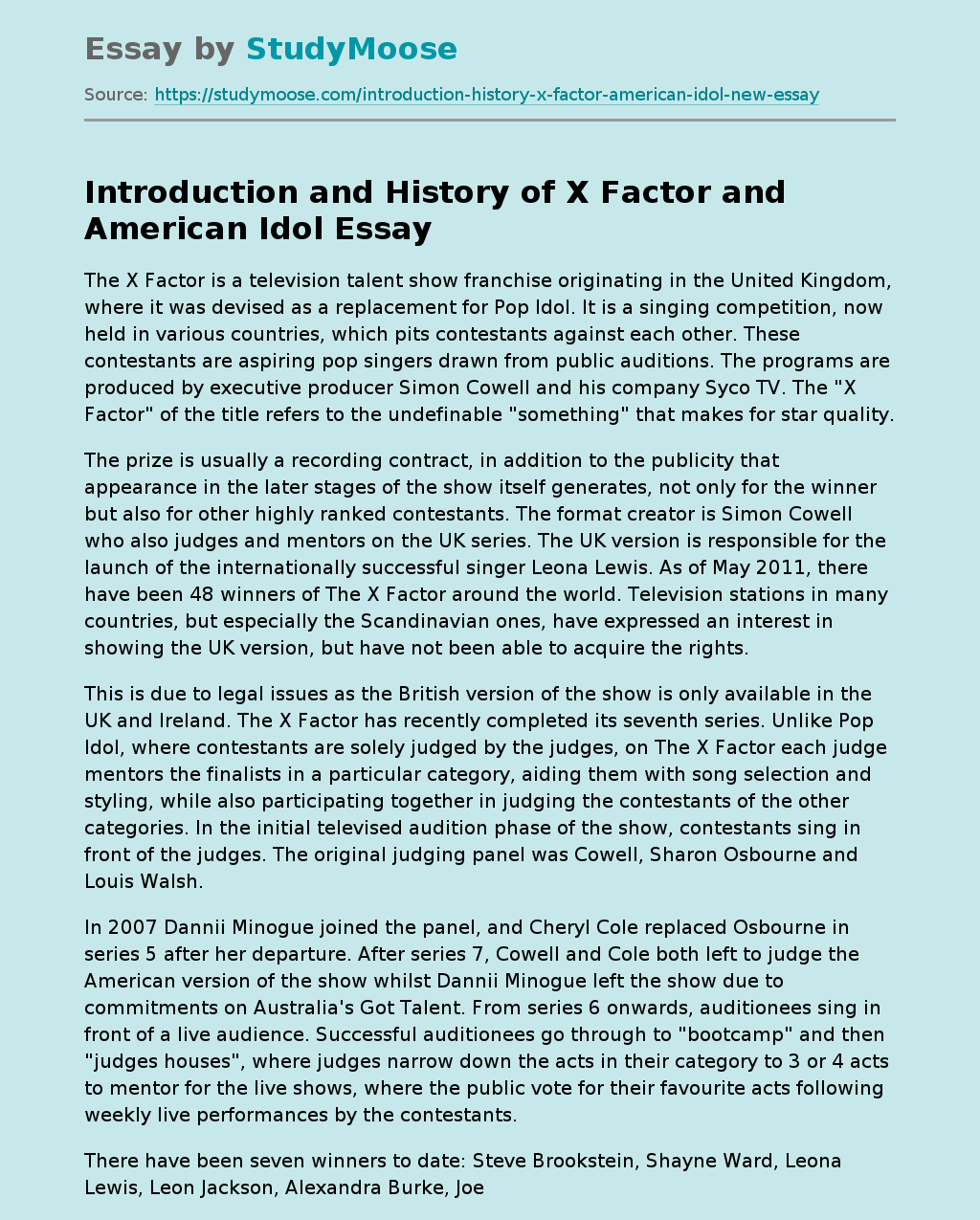