An Evaluation of Pip, and His Great Expectations

In the year 1860, author Charles Dicken’s began his thirteenth novel, Great Expectations. The work is a coming-of-age novel, which tells the life story of an orphan boy named Pip, who much like Dickens’ in his earlier years is unhappy with his current life. A number of Charles Dickens’ personal life events are mirrored in the novel, leaving Great Expectations to be one of his most autobiographical works. Young Pip, the protagonist of the novel is stuck living in the marsh country, he is working a job that he hates, and considers himself to be too good for his current surroundings, much like Dickens’ did when he was younger.

Don't use plagiarized sources. Get your custom essay on
“ An Evaluation of Pip, and His Great Expectations ”
Get custom paper
NEW! smart matching with writer

While working on Great Expectations, Dickens’ made weekly installments to the novel, leading it to be one of his most well structured works. Great Expectations is a novel which develops a number of different themes as the story progresses, with the primary theme being personal growth and ambition. The story tells us that morals such as affection, loyalty and conscience are much more important in reality than social-class, social advancement, and wealth.

The protagonist, Pip, is destined to learn this lesson through his ‘great expectations’, as he explores different ideas of ambition and self-improvement.

Great Expectations is a convincing tale told in the perspective of an orphan named Pip, who tells his realistic life story from the very beginning of his ‘great expectations’, which all began one evening when he had a strange encounter with an escaped convict in a cemetery, while he was looking at the tombstones of his parents.

This mysterious stranger ordered young Pip to bring him food and a file to break loose the shackle on his leg. If Pip does not comply, the strangers promises to murder him. After bringing the convict food and an iron the next day, Pip finds out that the convict has been arrested, and the mysterious criminal has protected Pip by telling the authorities that he stole the food himself. Some time after this event took place, a lawyer by the name of Jaggers appears in the marsh country that Pip lives in, and he comes with strange news: a strange benefactor has given young Pip a large fortune, and Pip must leave his life of being a blacksmith at the forge behind in order to go to London with Jaggers and become a gentleman, and get his education.

During his time in London, Pip discovers many truths about his life, the mysterious benefactor, and his past. A man from the country marsh named Orlick who is the polar-opposite of Pip reappears in his life, and is dead set on ruining it, as well as hopefully killing him. The reader is kept guessing what will happen with Orlick and Pip as the story progresses, as well as who Pip’s mysterious benefactor is. Dickens’ managed to make Great Expectations and interesting read, but a rather dull journey lacking any sort of excitement.

Instead of having any sort of surprise throughout Great Expectations, the author simply gives answers to questions asked and created throughout the story, none in which intrigue the readers. The end holds no real surprise, and the novel ultimately ends up being just a message to the readers, saying that money and living in a good social class is not important in comparison to family, friends, and happiness. There are a number of events throughout that story that are irrelevant to everything, such as Pip and his friend Herbert end up being in debt. The debt has absolutely no negative or positive effect on the story, but is only a bit of filler throughout one of the chapters.

The main character of Great Expectations, Pip, is the most guilt-ridden character in the novel, he has no prejudice. His most noticeable and crucial characteristics are his naturally good conscience, and his immature glory of romance. Pip eventually faces an internal conflict once he better understands the reality behind poverty and immorality, he decides that he wants to achieve as much as possible. Because of this, Pip puts his life at the marsh country behind him, he abandons the people who care for him the most, and goes to London where he becomes a gentleman. In London, Pip views his past actions very negatively, and very seldom does he ever give himself credit for good deeds he has done in the past. As a gentleman, Pip starts to act as he always imagined a gentleman would, this adds to him treating his family poorly. Many of the characters throughout the story do not seem to be very realistic, it is almost as if they were meant to come across as being quite fictional.

Estella is an unrealistically ‘cold’ character, who has zero feelings for anybody or any living thing. She has absolutely no ability to express emotions to the extent that it seems completely unreal.Despite this, Estella almost does come across as being quite sympathetic for her being the way she is. She warns Pip regularly that she has “no heart”, and strongly urges him to love somebody else, for she is not good for his wellbeing and happiness. At the end of the novel, however, Estella finally begins to feel like as though she is out of Miss Havisham’s control, and is finally her own person, as she tells Pip, “Suffering has been stronger than all other teaching. . . I have been bent and broken, but – I hope – into a better shape.” Miss Havisham is the most unrealistic character in Great Expectations, she lives in a rotted mansion, and has not removed her wedding dress in over ten years. Miss Havisham has stopped every clock in her mansion at twenty minutes to nine, and refuses to ever know what time it is, whether it be day or night.

Great Expectations takes place in the 19th century, the main character, Pip, is born in England in the 1800’s and is telling his story in the year 1860. The novel is set around the life of Pip, who is on a mission to meet his “great expectations”, whatever those may be, and to become a gentleman. His life story takes place both in the southeast marsh country of England, and eventually in London, England, where Pip lives as a gentleman. Great Expectations takes place during a very busy time for England, with the Industrial Revolution occurring, as well as the voidance of slavery in the British colonies during 1834. To the people, London is considered to be a prospering capital, and England is a powerful giant on the globe. However, the way Dickens’ depicts is quite the opposite of that.

Pip’s hometown Kent, which resides near the marshlands is twenty miles away from the ocean, and the townsfolk can see the Thames River flow through it. Off in the distance of the marshland and ocean is where the convict ships dock, causing many criminals to lurk about the area. The setting is important because of the time period the story takes place, the economy is thriving and there is plenty of opportunity for money. The mood throughout the story feels rather empty, there is never much tension, never much pain, and never much happiness throughout Great Expectations. There are times throughout the novel when some places Pip travels to bring the mood to different levels, for example, Miss Havisham’s rotting mansion sets a darker mood on the tale, but shortly after when Pip is back in London, the story is back to the usual calm mood of Great Expectations. The story often goes through mood swings because of this. When certain characters come into the picture, they do have a slight effect on the atmosphere, though the atmosphere of the novel is usually made clear through Pip’s thoughts, as well as his actions.

The year is 1860, Charles Dickens’ has just begun his thirteenth novel, the irritating tale of a young man named Pip, who has come across a large fortune of money, and decides to selfishly leave his family and loved ones behind in order to go to London, and be rich. As the novel progresses, Pip develops as a human being and learns many things, as well as beats himself up for his past. Throughout the ride, Pip comes across a great deal of many different people,such as a heartbroken old timer who grieves every day in her own self pity, a stone cold young lady who holds no love for any living thing, a criminal who has a strong sense of high values, and a lawyer who takes Pip under his wing to becoming a gentleman. Each character is unique in their own way, yet each continue to be uninteresting throughout the novel. Dickens’ not only presented the readers with a number of dull characters, but gave his audience a boring tale which ultimately holds no sort of significance in the end.

While the novel is generally quite uninteresting, the setting of the novel is rather exciting as it takes place during the Industrial Revolution of England, however this is hardly noted in the novel, therefore putting readers in front of a rather empty, “too much like home” world, where the men work hard and the women stay at inside all day, the rich are greedy and the poor are struggling. Charles Dickens had a great idea with Great Expectations, but focused too much on other things as well throughout the story which ultimately helped lead it to become uninteresting and irritating to get through, at times there was too much going on in the novel, while at other times unnecessary events were taking place, which did not progress the story in any way whatsoever. Though the theme of Great Expectations exists, the end gives readers more of a relief that the book is finished, rather than leaving them in an intrigued state which Dickens seemed to have originally intended.

An Evaluation of Pip, and His Great Expectations. (2017, Feb 04). Retrieved from https://studymoose.com/an-evaluation-of-pip-and-his-great-expectations-essay?post 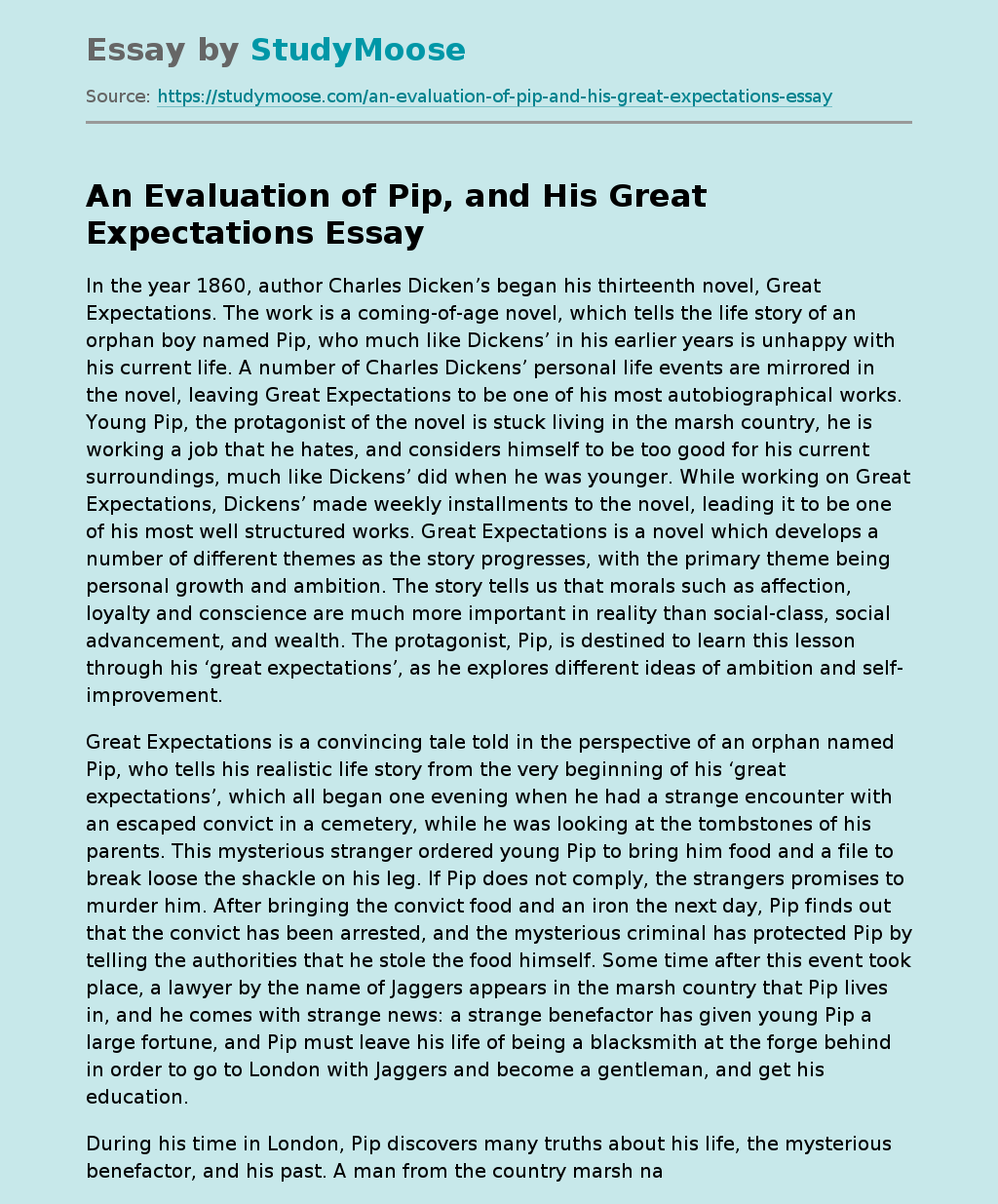