Pip and His Guilt in Novel

Guilt is an on running theme throughout the novel. Pip’s guilty conscience is apparent in the second chapter when Pip plans to steal from Mr and Mrs Joe. ‘Conscience is a dreadful thing when it accuses man or boy’. This way Dickens uses the word ‘accuses’ suggests that guilt is something that is thrust upon a person and it cannot be controlled. The way Dickens chooses to comment so closely on Pips guilt shows it was a major part of this characters life, and it shows that Pip is a fairly moralistic character.

Don't use plagiarized sources. Get your custom essay on
“ Pip and His Guilt in Novel ”
Get custom paper
NEW! smart matching with writer

However, Pip is made to feel guilty even when he hasn’t done anything wrong. ‘”naterally vicious”. Everyone then murmured “True! ‘ When Pip is having dinner with his relatives, the adults are talking about children being unappreciative and ‘vicious’. The use of the word ‘naterally’ suggests that children are born sinners, un-innocent. This is quite the opposite of the normal portrayal of children. Children are usually seen as innocent and pure.

For Pip to sit their and be blamed for all these faults that children have must not be pleasant, when Pip is just a normal innocent child who hasn’t done anything seriously wrong. The fact that Mr Wopsle and Uncle Pumblechook make Pip feel guilty for small, petty things is ironic as we know Uncle Pumblechook is pompous and obsessed with money, and shamelessly takes credit from Pip’s rise in social class although it has nothing to do with him.

The theme of guilt is carried on throughout the rest of the novel in a number of ways.

Magwitch obviously feels some remorse for the way he treated Pip on the marches. He gave Pip the sum of money as a token of appreciation and to apologise. We know this because Magwitch wouldn’t have given his savings if he hadn’t had thought about Pip a great deal, this must mean Magwitch cared for Pip because he appreciated his actions on the marches and felt guilty.

At the beginning of the novel, Pip’s feelings of conscience are determined largely by his fear of what others might think, a state of mind reinforced by Mrs Joe’s “Tickler”. He has strong feelings of guilt but an inadequate way of judging what is right and wrong; unable to determine the value of his own actions, he feels guilty even when he does the right thing. He acts with compassion and sympathy when he helps the convict, but he still feels deeply guilty and imagines that the police are waiting to take him away.

As the novel progresses, Pip comes closer to trusting his own feelings; when he helps Magwitch at the end of the novel, he feels no guilt, only love, and he remains with the convict even after the police arrive to take him away. Throughout the novel, symbols of justice, such as prisons and police, serve as reminders of the questions of conscience that plague Pip: just as social class provides an external standard of value regardless of a person’s inner worth, the law provides an external standard of moral behaviour irrespective of someone’s feelings.

Pip’s wholehearted commitment to helping Magwitch escape the law in the last section of the novel contrasts with his childhood fear of police and shows that, though he continues to be very hard on his own personality flaws, Pip has moved closer to a reliance on his own inner conscience which is the only way that a character can truly be “innocent”. Social class and snobbery are probably the most important themes throughout the novel. Many of the characters are extremely class-conscious, especially Pip.

Characters in the novel use class in order to judge one another because class is always associated with romantic qualities such as luxury and education. In the beginning of the novel Pip is constantly trying to better his social class. We see this when Pip is being taught how to read by Biddy. But we clearly see that social class doesn’t make one a better person. The most respected and the characters who have social status are the ones who lack moralistic values and respect for others. Miss Havisham for example was a wealthy woman with money and respect. However, her character has many flaws.

She has no respect for males, and is dishonest. The way she moulds Estella into becoming someone who also disrespects males, which turns out to be Estella’s greatest downfall. Another well-respected figure is Jaggers. He may have respect and be looked up to, but the way he consorts with criminals suggests he isn’t a moralistic character. Pip’s strive to become a gentlemen was over when Magwitch left him the sum of money, he moved to London and became a gentlemen, but even Pip knew this did not make him a better person, and this is the most important lesson he learns in the novel.

Criminality and justice also plays an important role in the novel. Justice plays an important part, as it is one of the key factors in the main event of the novel. Magwitch committed many crimes in his lifetime, however he had his punishment and did a good deed in order to show remorse and to have his sins repented. This is reflected in the way Magwitch dies. He has a very peaceful death, unlike some of the other characters, for example Miss Havisham, who was sinful and died in a horrific fire.

This idea is also carried on when Mrs Joe is murdered, we could say she deserved this because of the terrible way she treat Joe and Pip. The most important theme in the novel is social class. This is the case because the novel is about a young man striving to better himself and become a gentleman. This involves moving from one social class to another. Dickens was successful in displaying the difficulties of class division because he highlights the fact that moving up through a social class division doesn’t necessarily make you a better person, and this is a lesson Pip learns in the novel.

Pip and His Guilt in Novel. (2020, Jun 02). Retrieved from http://studymoose.com/pip-and-his-guilt-in-novel-essay 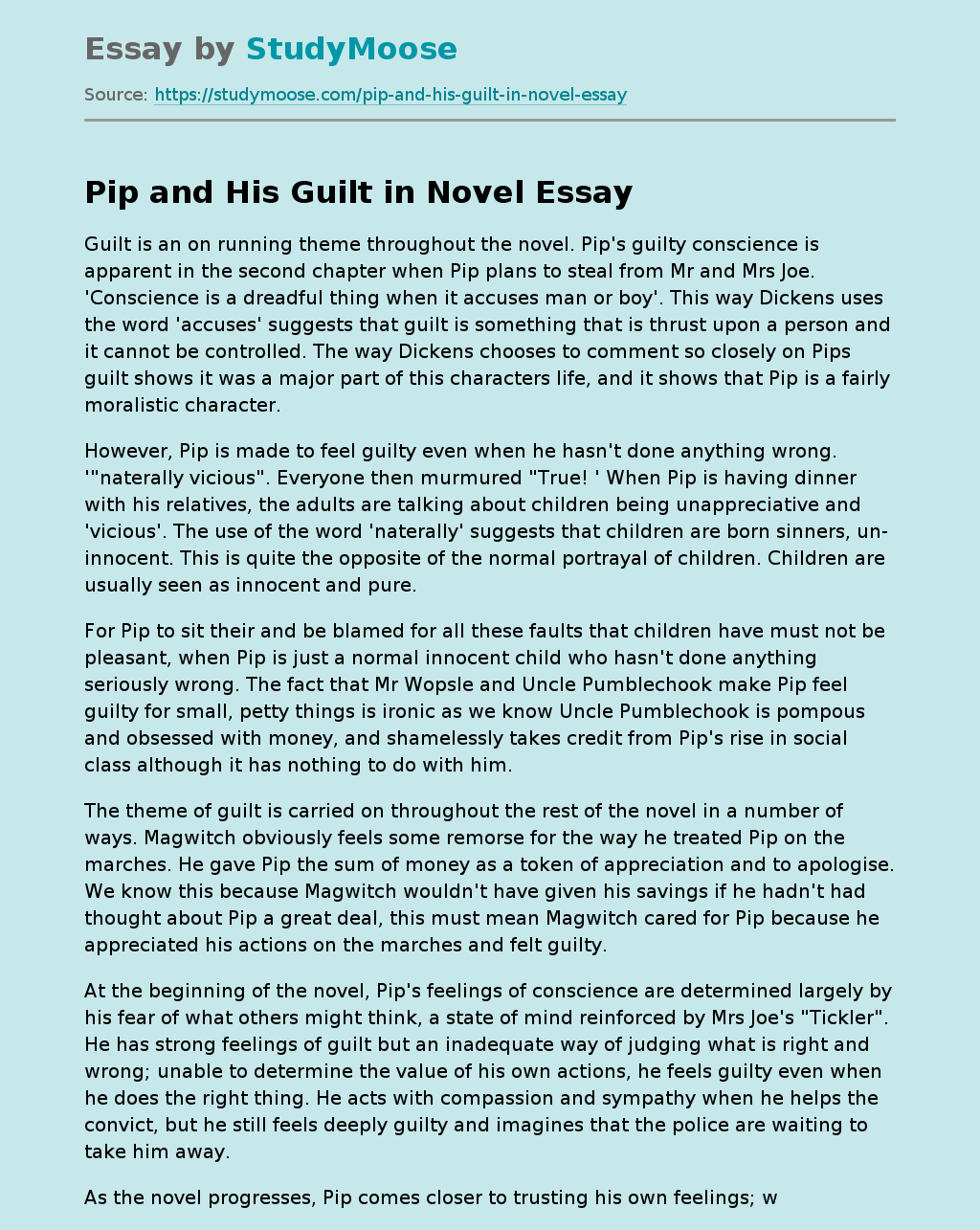