Magwitch is also religious, and knows Pip is, ‘Say, Lord strike you dead if you don’t’, there are threats of death again, and the way Magwitch says these threats, means that Pip will have to do everything Magwitch tells him to do. ‘Glancing about him’, despite his brave and fearless image to Pip, he is actually nervous, tense, and worried. Magwitch wishes he could escape the situation he’s in, ‘I wish I was a frog or an eel’, they are wet, slippery animals, and they could escape and enjoy the wet and the cold, instead of shivering and being miserable.

Don't use plagiarized sources. Get your custom essay on
“ Magwitch empties Pip’s ”
Get custom paper
NEW! smart matching with writer

Magwitch is associated with death and despair

Clasping himself, as if to hold himself together’, he is not as strong or as threatening as he appears at first, and the reader feels slightly sorry for him. Magwitch is associated with death and despair, ‘eluding the hands of the dead people’; he only just escapes death, just like his threats to Pip.

‘Numbed and stiff’, Magwitch has been weakened by the hardships he has been through, and the cold and wet that he will have to survive in. Just as Magwitch is limping away he turns round, ‘turned round to look at me’, he needs Pip, and needs his help if he is to survive, and not be caught.

Magwitch is in reality quite weak, ‘still hugging himself in both arms’; this is why he needed to invent the terrifying man, as it makes himself more frightening in Pip’s imagination.

The last thing that the reader reads about Magwitch, portrays him in a terrifying image, ‘the man was limping on towards this latter, as if he were the pirate come to life, and come down, and going to hook himself up again’, this makes the reader wonder why he would hook himself back. This shows Magwitch’s weakness. Pip is the narrator and also the central character in great expectations.

The opening paragraph describes in detail his early years and his family. He describes himself as being very young, ‘my infant tongue’; this shows he is quite childish. He has always had to look after himself, ‘so I called myself Pip’; he names himself, and is independent. He is alone, ‘I never saw my father or my mother’, his parents have died, leaving him all alone. When he is writing this, he is clearly an adult, ‘unreasonably’ ‘an odd idea’, he knows that when he was younger he had a very big imagination, and what he thought back then is not the case now, but probably derived from having no paragraphs.

He reflects back to his thoughts as a child, ‘childish conclusion’, he is not ashamed of the thoughts he conjured, though presses on the fact that he was just a child. He considers life very tough, ‘universal struggle’, his life as a child, being brought up in quite a poor household has had an effect on how he views the way he has been brought up. He is religious, ‘I religiously entertained’, he has been brought up with his life centred around the church, especially with so many of his family dead.

The scene of Pip in the graveyard

The scene of Pip in the graveyard opens with him being portrayed as small and innocent, ‘small bundle of shivers growing afraid of it all and beginning to cry’, he is in isolation in this bleak place, which enhances his fear, he is very much alone. Pip feels intimidated by Magwitch “sir”, this shows Pip is polite, and trying to be civilized towards Magwitch in the hope that Magwitch will return it. Pip is terrified and desperate, “I pleaded in terror”, Pip is begging for his life, desperately clinging to the hope that the convict may show some compassion.

Pip is poor, and the first sign we have of this is when Magwitch empties Pip’s pockets, ‘there was nothing in them but a piece of bread’, Pip is hungry, and this shows he is poor and has nothing. Pip is young, though small for his age; “I was at that time undersized, for my years, and not strong”. Pip is physically weak, as well as being emotionally weak; this derives from living with Mrs. Gargery, who does not love him, and is trying to prevent him from seeing their parents’ graves.

Pip holds tight to the gravestone, to not only stop himself from physically falling, but emotionally falling as well, “to keep myself from crying”, Pip wants to seem stronger, as if he cries he will be showing weakness towards the convict. Pip only knows his parents as inscriptions on gravestones, “also Georgiana”; Dickens has used this, as it evokes feelings of tenderness, pity, sorrow, and sympathy towards Pip. Pip is intimidated by Magwitch once again, “mine looked most helplessly up into his”, he feels helpless, and has no control of the situation, which evokes feelings of insecurity.

Pip is undermined and is threatened by being turned upside down, “greater sense of helplessness and danger”. These physical threats make Pip even more terrified, as he is not just physically being turned upside down, but emotionally as well. When Pip is tilted again and again, “I clung to him with both hands”, Pip is terrified of Magwitch, yet reaches out to him emotionally, and physically clings to him for support. “The church jumped over its’ own weather cock”, this is a slight fairytale image, which shows Pip’s childish mind again, though to him seeing the church offers him a slight comfort that God is there with him. 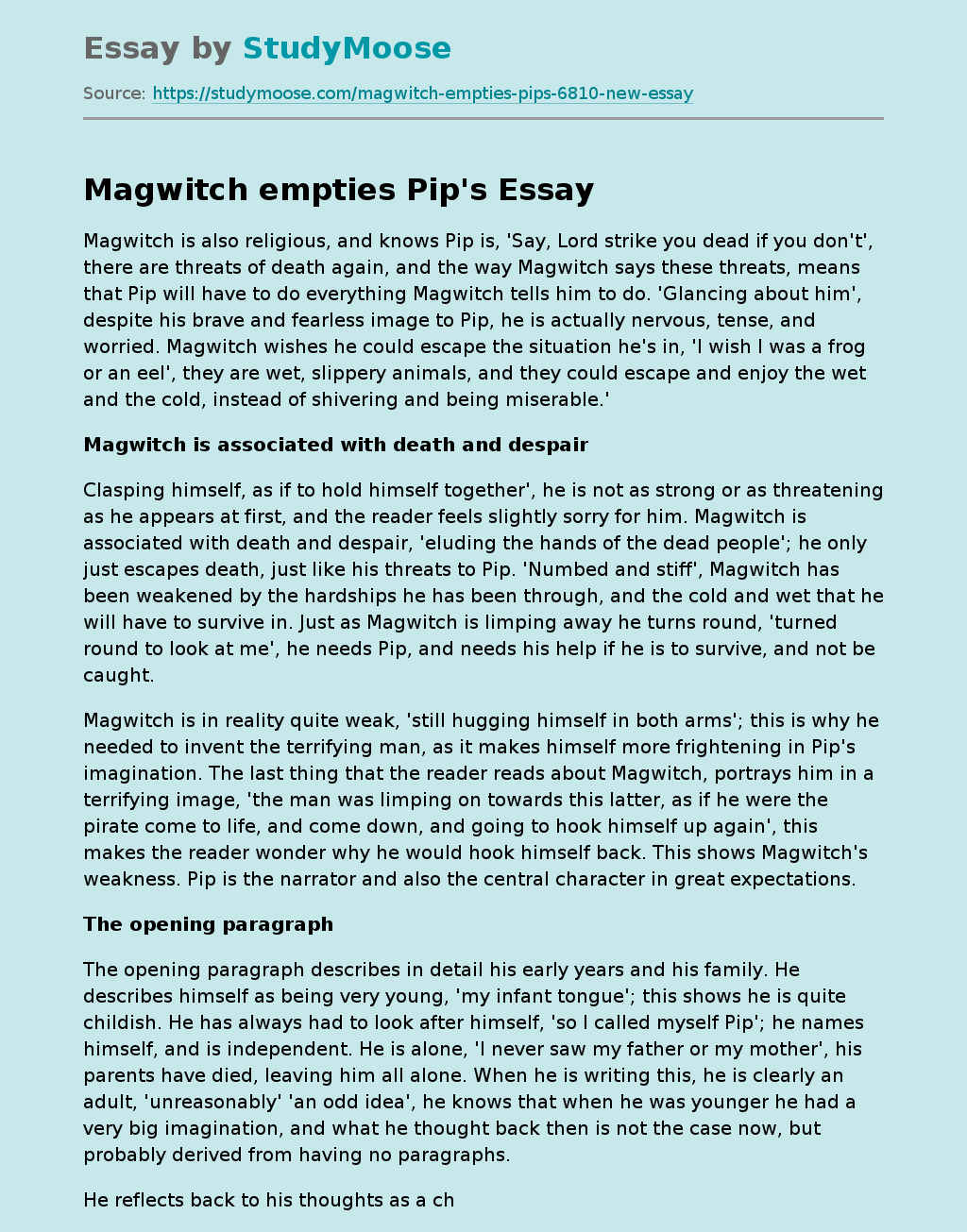