An Analysis of the Character Du Tenth in the poem

Du Mei is the lead female character in Feng Meng-Long’s poem “Du Tenth Sinks the Jewel Box in Anger”. She was a famous courtesan belonging to one of the brothels located in the Northern capital of China during the Ming Dynasty. Du Mei was also known as Du Tenth by virtue of being the “tenth-born of her generation” (837). She was described to be extremely attractive and alluring. Her beauty was said to be flawless and could only be compared to what is most beautiful in nature.

Don't use plagiarized sources. Get your custom essay on
“ An Analysis of the Character Du Tenth in the poem ”
Get custom paper
NEW! smart matching with writer

Below is an excerpt from the poem: Two arcs of eyebrow traced with green of distant hills;

a pair of eyes bright with welling autumn floods. Face like a lotus bud – just like Wen-jun of the Zhou clan; Lips like cherries… (837) Her reputation was so renowned that a jingle was composed in her honor which remarked on her effect on men and how other women pale beside her. Du Tenth exhibited no qualms about taking advantage of her charms.

She was more cunning than coy. From the age of thirteen when she lost her virginity and up until the age of nineteen when she met and chose her favored lover Li Jia, she enthralled men and controlled them to squander their fortunes on her.

Her cunning once more came to the fore as she negotiated the terms of her freedom. As her greedy madam was trying to manipulate her to get rid of Li Jia who by that time had run out of money, Du Tenth outmaneuvered her and pounced on the prattle of her madam about Li buying her freedom.

She worked on the madam’s innate skepticism and managed to get the price down and extend the deadline from three days to ten days. She even got the madam to commit to her word. She likewise worked on Li to commit to his word to buy her freedom and to take her away with him as his wife and start a new life.

More so at that time, having a former whore as a wife was unacceptable to polite society and most especially to political families to which Li Jia was a member of. Du Tenth also showed her romantic side and her sense of loyalty by sticking beside Li in spite of his lack of financial capability, his weak personality and numerous shortcomings. She nudged him on and encouraged him by putting up half of the buy-out money and allowing him to save face by giving him the opportunity to complete the other half. She was able to accomplish this without causing undue embarrassment to him.

She was level-headed and showed strength in her demeanor not even once shedding tears of frustration unlike Li who cried in torrents. Not once did she waiver on her objective. She was able to deliberate her actions, carefully plan each step and anticipated every need that may come up in her quest for a new life with Li. She also expressed gratitude freely and forged lasting relationships with her sisters in the quarters instead of envy and enmity for being far beautiful than they. Du Tenth’s intelligence and woman’s guile further manifested itself during her travel with Li.

She made suggestions instead of outright commands on the best steps to take to gain acceptance back into his family. She demonstrated a keen sense of self-control. She kept her cards close to chest and did not reveal all her plans to Li perhaps in the hope that he just might be able to come up with a plan on his own that would benefit them both. However, in return, he betrayed her instead to Sun Fu. Sun belonged to a family of salt merchants who harbored a malicious intent towards Du Tenth after hearing her excellent singing. Li betrayed her to Sun by revealing her as a whore and he again betrayed her by selling her off for a thousand taels.

Upon learning of this betrayal from Li herself, Du Tenth continued to outwardly look calm and collected while seething inside from disappointment and rage. True to form, Li missed the sarcasm of her remark, “The man who devised this plan for you is truly a great hero. The fortune of a thousand taels will enable you to restore your position in your family, and I will go to another man so as not to be a burden to you” (852). Regardless, she continued to harbor hope that Li might see the error of his ways and fight for their love as she did. However, as soon as the thousand taels exchanged hands, her anger boiled over.

She was a woman scorned and she showed her anger in the same deliberate way she acted all her life. Her actions were controlled and measured. She did not scream and throw a fit. Instead, the embarrassment that she had been saving Li from, she finally used against him to maximum effect. She used her cunning and maneuvered to gather as much of a crowd as she can by gradually producing her precious jewelry and with spectacle, threw them overboard one by one. Once she had the attention of the crowd, she cursed Sun and unleashed her disdain for Li. She announced his betrayal of the devoted and everlasting love that she offered.

She drove home his error in accepting the thousand taels and made it known to him that with her, he could have had more had he only shown the same loyalty and faithfulness. She had coped with a shameful life and Li further shamed her by casting her aside. In revenge, she shamed both by jumping into the river and drowned herself. Yet, even in death, she showed her gratitude for the kindness she had received while living. Liu Yu-chun, Li Jia’s friend who actually raised the remaining half of the buy-out money, found himself at the other end of Du Tenth’s eternal gratitude.

It was because of him, he who believed in the power of the love and devotion that she had for Li, that she was able to experience life of a free woman, albeit fleeting, without the indignity of being a whore. In return, Du Tenth gifted him with the remaining contents of her jewel box. Du Tenth was a cunning and strong-willed woman. She knew what she wanted, had the ability to devise plans and was willing to work on the means to get it. Regardless, she had not failed to show appreciation to all those who helped her along the way. Her experience as a courtesan should have left her jaded. Yet, deep inside, she remained a romantic at heart.

An Analysis of the Character Du Tenth in the poem. (2016, Aug 21). Retrieved from https://studymoose.com/an-analysis-of-the-character-du-tenth-in-the-poem-essay 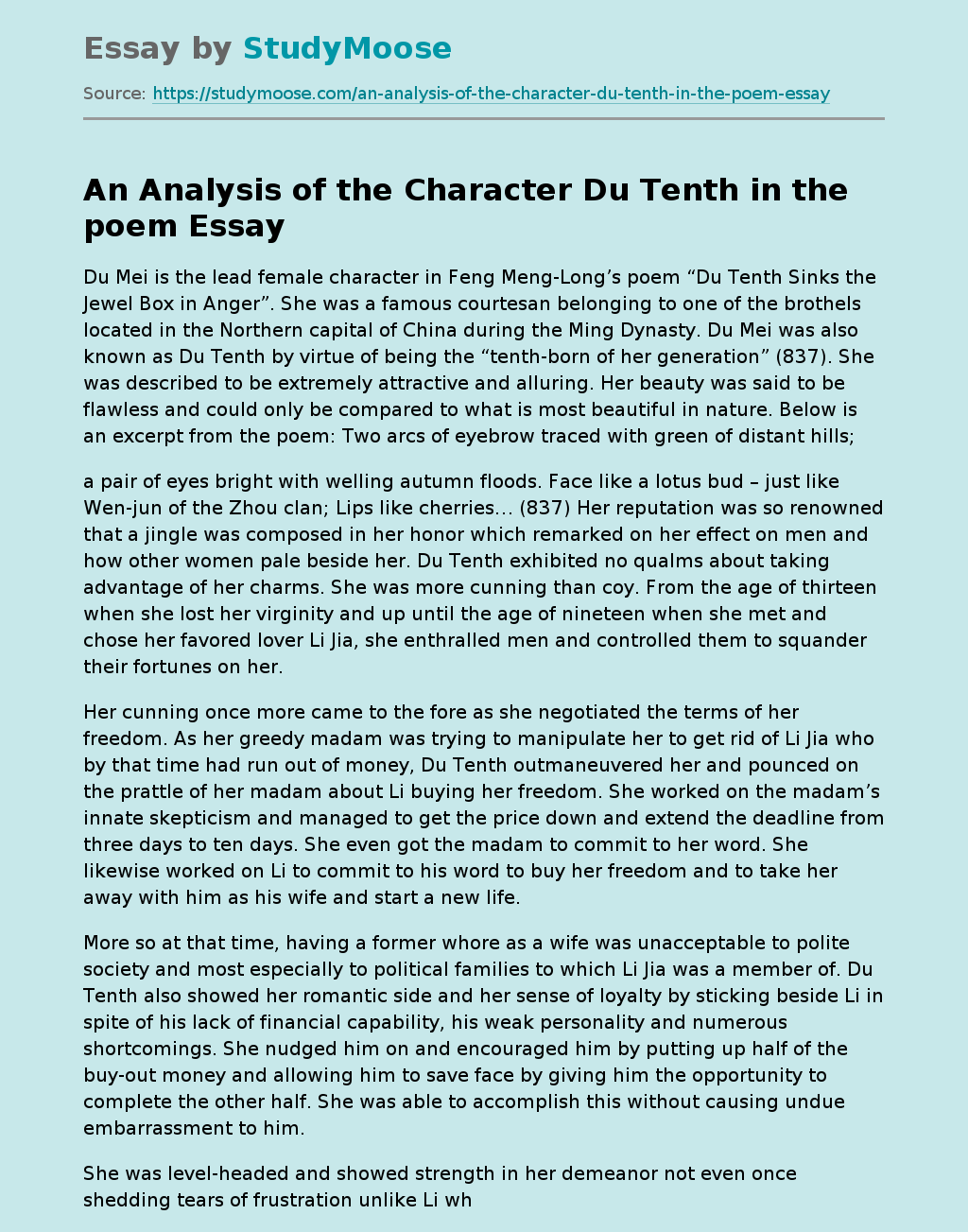