An Analysis of Purchase of Alaska

Manifest destiny spread through the country like a wild fire. William Seward stood on the banks of the Mississippi September 18, 1860and told of a dream he himself would fulfil seven years later: Standing here and looking far off into the northwest, I see the Russian as he busily occupies himself in establishing seaports and towns and fortifications, on the verge of this continent, as the outposts of St. Peterburg, and I can say, “Go on, and build up your outposts all along the coast up even to the Arctic Oceanthey will yet become the outposts of my own countrymonuments of my own civilization of the United States in the northwest.

Don't use plagiarized sources. Get your custom essay on
“ An Analysis of Purchase of Alaska ”
Get custom paper
NEW! smart matching with writer

Within a decade, Seward would sign a treaty, that gave the United States the second largest land deal in history. A territory twice the size of France would be handed to America for an unbelievable two cents an acre. Ironically Seward went through hell to obtain what is know known as the land with black gold, but to the citizens of his time Alaska was known as “Seward’s Folly” an area described as frozen empty tundra.

After enduring a hectic and chaotic meeting of negotiations, Seward agreed at 4 A.M. on March 30, 1867 to the rights to Alaska. A controversy arose as Americans over paid for a piece of land that the Russians would have gladly sold for $5 million rather than the selling price of $7.2 million. As a critic pointed out “A dark deed done at night” referring to controversial land treaty which gave America a wealth they could only dream of.

Alaska was first discovered by Vitus Bering, a Danish captain serving in the Russian navy on October 9, 1741, and the next century of expansion turned to turmoil and unwanted relations with their western colony. In 1784, Grigory Ivanovich Shelikov established the first permanent Russian colony in America on Kodiak Island. Four years later the empress of Russian, Catherine I, granted Shelikov exclusive rights to open the Russian – American fur trading company. Shelikov appointed Aleksandr Baranov as agent in charge of fur-trading operations, together they managed to receive rights to all enterprises on the territory of Alaska.

These rights included hunting, trading, or building, and even rights to claim new discoveries as their own. It didn’t take long for Baranov to take full advantage of the situation. He successful managed the fur monopoly and later governed the whole territory. Baranov prospered as traders gathered at his table late at night, feasting on the best foods and drinking large amounts of alcohol. Anyone who did not wish participate in with the wild Baranov was eliminated as a member of his company. The operation went smoothly through the early 1800’s, as the company traded with a variety of nation. But a problem arose. Major companies such as England’s Hudson Bay company and American traders tried to go around the Russian – American company and trade with the natives for better value.

By 1821 tensions were high, as Russia issued a proclamation banning foreign traders from Alaska. Failed treaties with America in 1824, and Britain in 1825 worsened their relationship. By 1834 Russian warships blocked the entrance to the Stikine River, where the Hudson Bay company wanted to establish an outpost. A year later Russia abandoned its treaty with the U.S. and banned all trade with Alaska. Trouble struck Russia as the Treaty of Paris ended the Crimean War in 1856 and left Russia with a huge national debt. For the first time ever Grand Duke Constantine brother to Czar Alexander II suggested to sell Alaska. On April 3, 1857, Constanine told the czar:

“We should do well to take advantage of the excess of money at the present time in the treasury of the United States of America and sell them our North American Colonies.”

By 1860 the want to sell Alaska grew. Russia signed the treaty of Peking giving them control of the Ussuri River and parts of Korea. With these advantages, Russia no longer needed Alaska as a trading outpost. In 1861 a study showed that Russian – American Company had stunted economic growth, and strongly discouraged Russians from settling in Alaska, because of the undesirable monopoly and the illegal smuggling that took place there. Russia was now faced with three options. One, let Alaska go on as before, and watch the company slowly decline in profit. Second, take over the colony and administer it properly costing them $188,000, and a futile attempt from far off St. Petersburg it would be. Third, sell the wretched territory to the Americans. Unfortunately for Russia, when they finally made up their minds to sell, America was catapulted into a civil war, and their hopes to sell the territory would be stalled for yet another seven years.

As America ended its civil war, the third option began to look like the best option for the Russian delegation. On April 14, 1865 John Wilkes Booth shot Lincoln to death, but his associate Lewis Payne, sought out to kill Seward the secretary of state under Lincoln. The controversy behind the entire negotiation begins from here. That night Payne attacked Seward, stabbing him in the throat and face. Seward barely survived the attack and a long scar on his throat was a clear reminder of his escape from death, and the almost ending of the purchase of Alaska.

In 1867 negotiations were an okay order under Alexander II, but his overwhelming pride forced him to caution Stoeckl to make it look like the United States was interested, and not as if might Russia was selling off its properties. The aging 66 year old Secretary of State William Seward went to work with Russian minister Edouard de Stoeckl. Both men were accomplished politicians of there time, were well equipped for the task that lay ahead. The tricky negations began on Thursday, when Seward received an approval from President Johnson that he’d give $5 million for Alaska. Stoeckl, didn’t respond so Seward upped his bid to first $5.5 million then after discussing with his cabinet it was $7 million. The cabinet said Seward could not spend more than $6.5 million on the deal, but Seward was in a rush anyway to get the deal into the Senate before they adjourned and would not meet again until December Seward pushed for a treaty to beat the Senate deadline so at 4 in the morning on March 30, 1867 the treaty was signed.

Just before the signing of the treaty Stoeckl added 200,000 more to the price tag to meet the demands of the pushy Seward. Despite a predictable dislike of him in the senate, only two senators voted to against the treaty, they were William Pitt Fessenden, and James Patterson. Fessenden was quoted for saying Alaska was Sewards’s Farm, and said,

“He would vote to approve the treaty only with an extra condition that the secretary of state be compelled to live there and the Russian governor be required to keep him there.”

The final outcome was the senate voting 73-2, and the house 91-48, with 77 abstentions, and on July 27 President Johnson signed the bill making it a law. The Alaska swindle began as only $7,035,000 of the purchase price was paid to the Russians. The lost money totaled $165,00. Stoeckl spent some $30,000 to pay for personal assistance for his work, yet $122,483 was never located, and the case was closed. It was rumored that the rest of the money was spent on bribing the members of congress, however, the exact numbers were not revealed from President Johnson’s personal notes. The purchase of Alaska closed the chapter of American manifest destiny as the corruption in obtaining land had spilled onto public eyes, and it was until 1898 that another annexation would occur, the Caribbean islands.

What exactly did America gain from the purchase of Alaska? Many experts and newspaper writers seemed convinced it was nothing, but frozen tundra. The press enjoyed ridiculing the purchase and deriding Seward. The newspapers had a veritable circus and vied with each other in concocting ironic names for Russian America. It was “Seward’s Folly.” It was “Walrussia,” It was “Icebergia” and “Polaria. Newspaper write Horace Greeley wrote in his widely read newspaper the New York Tribune said scornfully:

We simply obtain by the treaty the nominal possession of impassable deserts of snow, vast tracts of dwarf timbers, inaccessible mountain ranges, with a few islands where the climate is more moderate, and a scanty population supported by fishing and trading with the Indians. Virtually we got by an expenditure of seven million in gold Sitka and the Price of Wales Islands. All the rest is waste territory, and no energy of the American people will be sufficient to make mining speculations in the 60th degree north latitude profitable or to reclaim wilderness which borders on the Arctic Ocean. We may make a treaty with Russia but we cannot make a treaty with the North Wind or the Snow King. Ninety-nine hundredths of Russian America are absolutely useless….

Regardless of all the criticism the purchase was a triumph for Seward. The treaty added 570,374 square miles to the nations territory, at a cost of about 2 cents an acre. Unlike what the journalist said, Alaska proved extremely valuable to the United States. In 1898, the discovery of gold brought thousands of settlers to the area. Its coal, salmon fisheries, copper mines, oil, timber, and other resources have produced billions of dollars worth of products for the nation. Oil was discovered in Prudhoe Bay in 1968. Since then oil companies have paid over $900 million to dig and operate Alaskan oil wells. Ironically on July 28, 1977, Alaska’s “black gold’s” first shipment was valued at $7.2 million, the price Americans overpaid for “Seward’s Folly!”

An Analysis of Purchase of Alaska. (2021, Dec 07). Retrieved from https://studymoose.com/an-analysis-of-purchase-of-alaska-essay 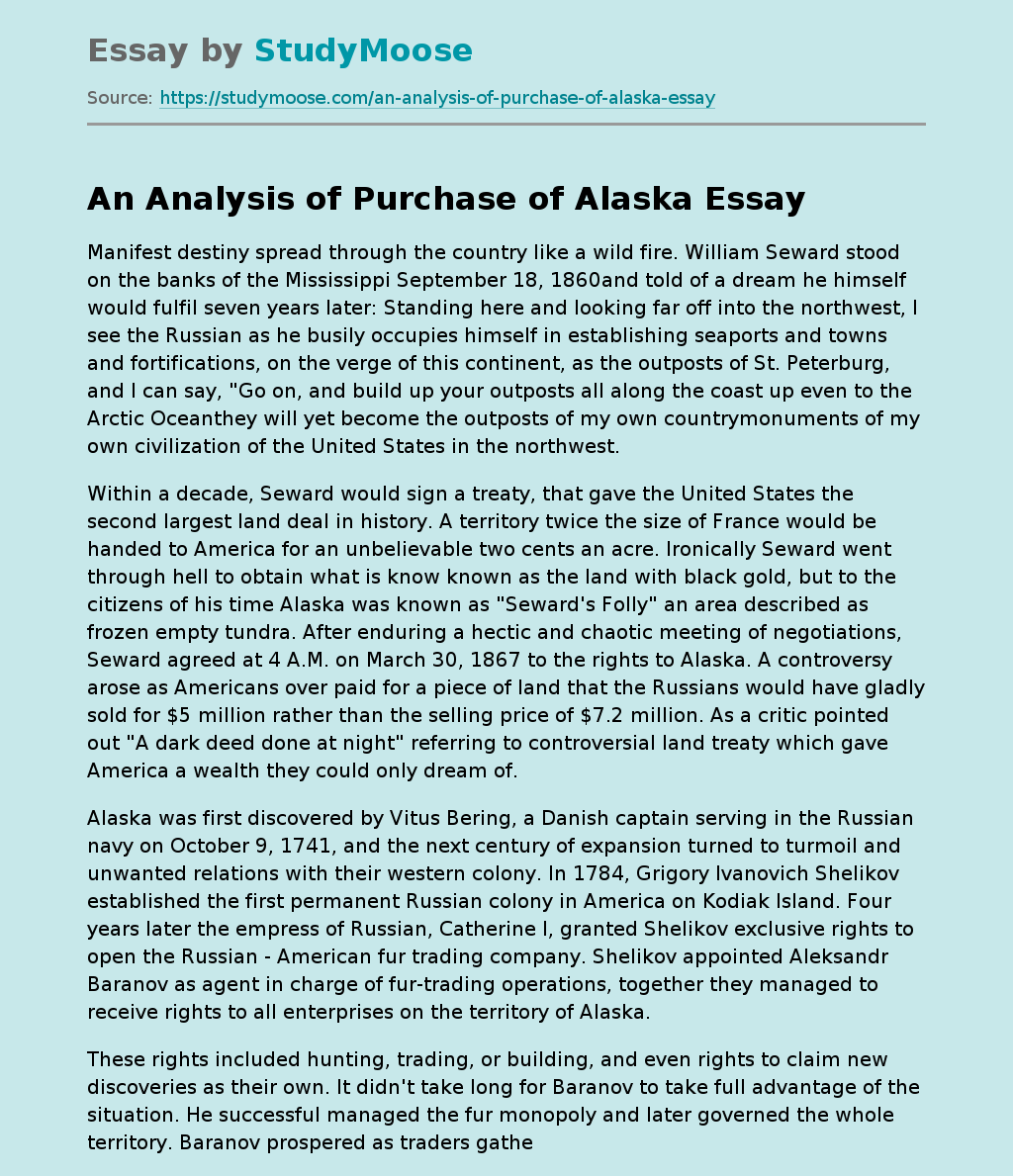