In Louis Owens’ essay “An American Indian Wilderness” the author projects a self-reflective and, in the end, pessimistic persona. As a young man Owens works as a park ranger in the American Wilderness of Washington State. He has the task of burning down an old log shelter in the wilderness, to return the surrounding area back to its natural state. After completing his task, he meets two elderly Indian women, who tell him that their father had built the shelter in the previous century.

Don't use plagiarized sources. Get your custom essay on
“ “An American Indian Wilderness” by Louis Owens ”
Get custom paper
NEW! smart matching with writer

He suddenly feels ashamed about what he had just done; however, the two women forgive him and he starts to understand the Indian philosophy in regards to “Mother Nature” and his own detachment with it.

In the first half of the story, Owen recalls that he “felt good and smug” about the job he had just completed, because he was “returning the wilderness to its original state.” He writes that it was a task he “heartily approved of.

” His feelings change after he meets the two elderly Indian women, as he learns that their father had also been a park ranger, as well as a descendant from the original Indian inhabitants of the “Indian country” he is working in. The two women seem “ancient” to him, probably wise as well and one with nature. They still know about the relationship that humans used to have with nature, before the Europeans “introduced the wilderness” to America.

As Owens’ tone turns darker, he realizes that he too “had succumbed to a 500 year old pattern of deadly thinking that separates us [humans] from the natural world.

” He realizes that the term “wilderness” is an “absurdity” and that there really had been no “wilderness” before the Europeans came to the land. The upbeat tone from the beginning of the text turns into a self-reflective analysis, which ultimately turns into pessimism about the future of the human civilization. As the mood of the story turns, the white snow turns into a “drumming rain”; he mentions that he understands “painfully” what the Indian inhabitants always knew – that we as humans are part of nature, but that we are not living that way anymore.

Owens’ persona becomes most pessimistic at the end of the text, when he writes, “Unless all human beings can learn to imagine themselves intimately and inextricably related to ever aspect of the world they inhabit, the earth will simply not survive.” He seems disillusioned about the chance we humans have, if we keep fencing in “Mother Nature” and turn her into a recreational aspect of our lives, rather than being part of the whole, as the original Indians used to be.

We as humans should take this very seriously and stop ourselves from expanding our “American Wilderness” farther and farther, pushing nature more and more away from us. Owens’ as the ‘Lone Ranger’ understands the intricate balance between us and nature and that at some point “The Great Mother” will either fight back or die forever. 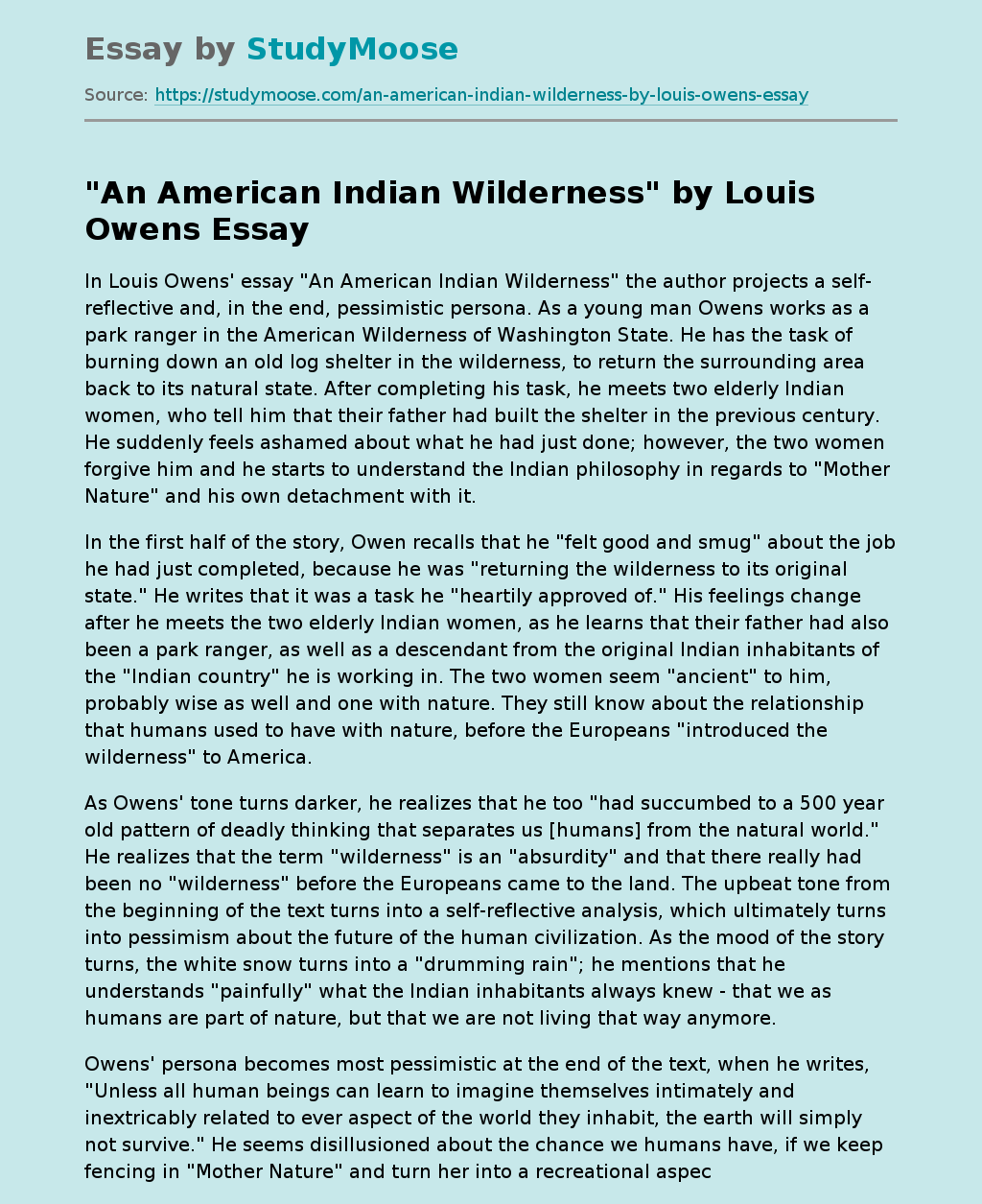