A person spends most of their developing years under the guidance of their parents or guardians. They affect how we think, how we feel, and how we act. These are among the people who hold the greatest influence. Amy Tan’s ‘Two Kinds’ and Jamaica Kincaid’s ‘Girl’ both deal with the relationship between a young girl and the guiding force in her life. Amy Tan tells of a mother’s expectation for her daughter to be a child prodigy. Jamaica Kincaid tells of an unknown person describing to a girl how to be a ‘good’ girl.

Don't use plagiarized sources.
Get Your Custom Essay on Amy Tan’s ‘Two Kinds’ and Jamaica Kincaid’s ‘Girl’ Just from $13,9/Page

Both essays illustrate an authority figure that has expectations for a young female and why and how those expectations will come about. As young children growing up without a care in the world, we cannot comprehend why authority figures dictate how we should behave. In ‘Two Kinds’, the daughter is expected to be a child prodigy because her mother believes ‘you can be anything you want in America’.

The mother sees other children with amazing talents and thinks her child could be just as talented, if not more so. She continually places pressure on her daughter to be some kind of prodigy. The daughter is expected to be a great beauty with unmatched dance abilities, an untapped wealth of useless information, and piano-playing skills like no other. In ‘Girl’, the expectations are much lower, but just as stringent. The girl is expected to do a myriad of chores and to become a ‘lady’. She is advised on how she should act and how she can avoid being a ‘slut’. In ‘Two Kinds’, the mother has high hopes; she believes a person can be anything they want in America and she wants a daughter who excels in some area. All of the mother’s hopes lay on the daughter. Her hopes are bolstered by stories about remarkable children with incredible talents. If they can succeed are such a young age, surely her child can as well. The mother wants her daughter to be the best she can be, but she has unrealistic expectations.

The girl in Jamaica Kincaid’s essays is not being held to such high hopes and dreams. The expectations placed on her are not as high, but are equally unforgiving. Her authority figure wants her to be the perfect ‘traditional’ girl. She is expected to cook, clean, iron, and not assert her independence. Children, though, are naturally independent and free-willed. For the authority figures to have their way, the girls must be obedient. Obedience and denigration are the methods in which these expectations are supposed to met. In ‘Two Kinds’, the mother states, ‘Only one kind of daughter can live in this house–obedient daughter!’ The daughter does not want to live up to outside expectations, but she does not want to disappoint her mother; part of her feels obligated to be loyal.

The mother compares the daughter to other children, which makes the daughter feel worthless. The mother talks about a three-year- old who knows the capital of all the states. She forces the daughter to watch television shows featuring talented youngsters. She implies her daughter is not as good as the other children. In ‘Girl’, the girl is given two choices – be a girl or be a slut. Essentially, she is being told what she must do; there is no room for debate. In between being told what to do, though, the authority figure also reminds her she could well be on her way to becoming a slut. In both essays, the girls come full circle.

They both go through a period of being told what to be and what to do. Both girls resent the pressure and expectations put on them in their adolescence, but in the end, they choose paths that lead back to their beginnings. Amy Tan’s girl spends a good portion of her youth hating practicing piano. As an adult, she plays an entire piece of music and is marveled by the beauty of it. In some respects, she becomes the child her mother wanted. Jamaica Kincaid’s girl spends a good portion of her youth protesting the label of ‘slut’ placed upon her. In the conclusion, she becomes the kind of woman she swore she was not. 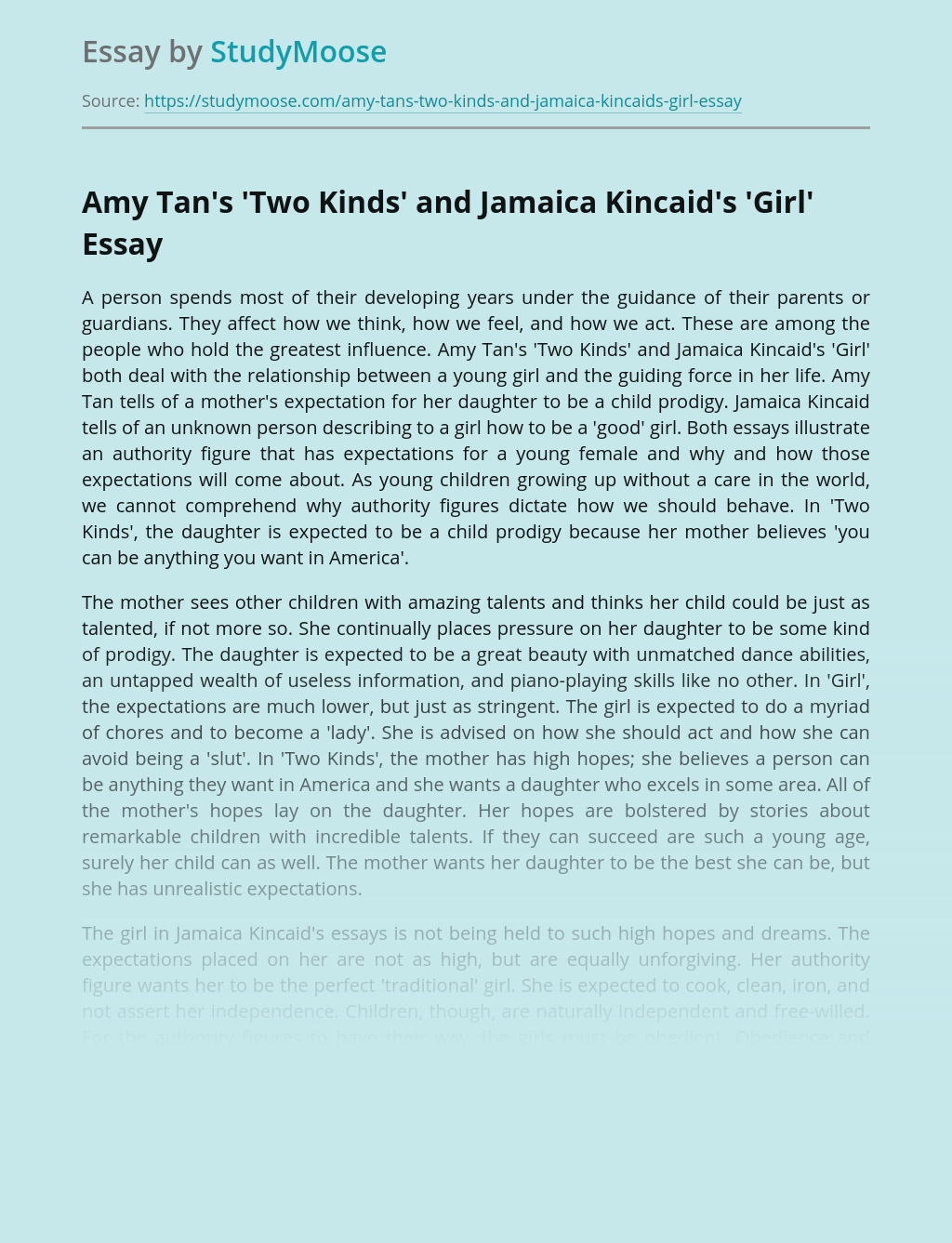 Pros and Cons of No Child Left Behind Act

On January 8, 2002, President Bush signed into law the No Child Left Behind Act of 2001 (NCLB). This law represents his education reform plan and contains changes to the Elementary and Secondary Education Act (ESEA) since it was enacted in 1965. It is asking America’s schools to describe their success in terms of what... VIEW ESSAY

The International Labor Organization (ILO) estimates there are about 12 million children engaged at work in India. This is an alarming statistic. Thesis – Not only is child labor, a violation of law to the rights of children, it is also Potentially damaging the education. Reflection on the economy. Causing health issues. Body Paragraph 1:... VIEW ESSAY

Mass media influence refers to the effects the media like TV, radio, internet and magazines have on their audiences and control the way they think and behave. Media have a strong influence to the society and also form a barrier between the society and the outside world. Children who view violent programs on TV tend... VIEW ESSAY

“His behavior didn’t change. The object changed.” This is what psychologist at George Washington University, David Silber, stated when asked about the relation between Jeffrey Dahmer’s childhood activities and his unspeakable crimes later on in life that traumatized civilians and Milwaukee’s finest law enforcement. The name “Jeffrey Dahmer” conjures images of his numerous brutal murders.... VIEW ESSAY

View sample
Are young people feel to being too protected

Parents often believe that it is better to be safe than sorry. Do you consider young people to be too protected? Whenever you come across the word “childhood”, you can sense the freedom to do everything, you can see yourself on all smiles and even you can remember the silly things you have done with... VIEW ESSAY