Theme of Life Experiences in a Story The Flowers

“The Flowers” is a story written by Alice Walker, in 1988. It’s a 3th-person narrator that tells the story. The story tells us about a girl, whose name is Myop. She lives near a forest in a cabin with her family. Sometimes she walks in the forest with her mother, they collect nuts among the fallen leaves – actually they have done it many times, so that’s why Myop knows the forest very well. One day she is out for one of these walks, but by herself.

Don't use plagiarized sources. Get your custom essay on
“ Theme of Life Experiences in a Story The Flowers ”
Get custom paper
NEW! smart matching with writer

This day something is different in the forest, and Myop decides to go home, but suddenly there is a man…lying in the forest floor, just beside a wild pink rose.

When first we meet Myop she is walking near her house, playing around with her stick making sounds, she is walking towards the forest. Myop is a ten-year-old girl, and it seems like she still is a bit naive and unaware of what is going on in the world.

Proficient in: My Life Experience

This I also therefor I think the name Myop maybe could come from the expression “myopia”, which means narrow sighted or shortsighted. Myopia causes that the image you see, when you look at something in a longer distance, it’s out of focus or most likely impossible to see.

That day she was walking in the forest alone. She made her own path, going that way and that way, while she was collecting blue flowers. She was having fun all by herself.

She seems very innocent, but also confident, because she is walking all by herself. Normally she likes to walk in the forest, and also this day until something changes, suddenly the forest doesn’t feel safe anymore, and as a reader you get a feeling of fear on the behalf of Myop. In the text there is written “the strangeness of the land made it not as pleasant as her usual haunts”(page 1 line 24).

Here you begin thinking of what might happen since things suddenly are different than they use to. Myop is getting insecure and afraid, so she decides to walk back home to the house, but on her way home she stumbles over something. “It was then she stepped smack into his eyes. Her heel became lodged in the broken ridge between brow and nose, and she reached down quickly, unafraid, to free herself.”(page 1, line 26-29). This is possibly the first time Myop faces dead, until now she has been childish and a bit naive to the rest of the world. So I can’t image that she has been faced with something so serious like this before.

The man she stumbles over I’m pretty sure have been an Afro-American. I say that because he was tall, had big bones and wore blue overalls, these things I mean prove that he was an Afro-American, because all of these things are typical for an Afro-American man and not a white man. Myop is also an Afro-American, this we hear in the text “the stick clutched in her dark brown hand”(page 1 line 9). Because of that it sort of takes a rotation in the story. I begin to think about White vs. Black people, and things like lynching or murder. There is a noose near the man, and that indicate that he might have been exposed to hanging/lynching. The fact that he isn’t buried is also a thing that makes me think of murder, and not a normal dead. And then there is the rose, there is only ONE pink rose, and it’s just beside the body of the man. This could might be a sign to the reader, that there maybe had been someone and laid it there, just like to a funeral where we lay flowers on the grave.

This almost convinces me of the fact that the man was killed, and there have been someone who loved him to say goodbye to him. In the end of the story Myop lays her own blue flowers beside the pink rose. I think it could be a sign that Myop has changed that day, she has seen some terrifying things, and involuntarily needed to handle and think of things, which actually what just what she needed. The walk in the forest possibly made her see that the world isn’t just all good, and that there is some things out in the real world, which is not what she expected – but it’s not bad that this happened to her, in a way it helped her grow away from being a kid. Some day we grow up and need to see the world in a different perspective, than we do as kids. This day was the day Myop mentally grew a bit older, and may started to see the world in a different way.

Theme of Life Experiences in a Story The Flowers. (2016, Apr 27). Retrieved from https://studymoose.com/alice-walker-flowers-essay 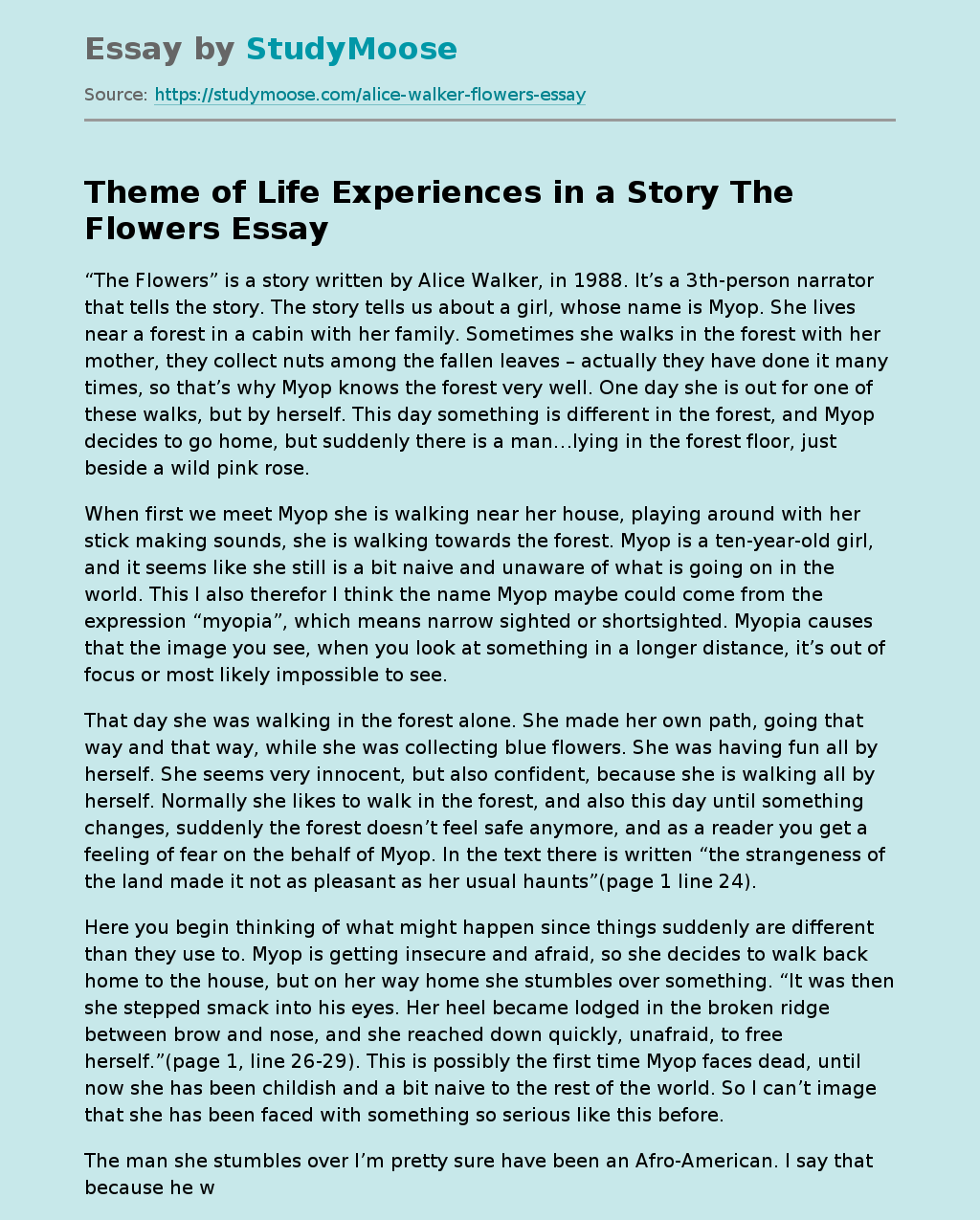