Over recent years the external environment and the marketplace have become increasingly dynamic and competitive, with progressive consolidation of the market leaders and continuing need of companies to adapt their structure towards our demanding society. This trend has led Alibaba Group Holding ltd. to conduct some organizational considerations before being listed on the New York Stock Exchange last September. Alibaba is a Chinese e-commerce company founded in 1999 by Jack Ma, who successfully created a B2B website and portal connecting Chinese manufacturers with thousands of overseas buyers.

Don't use plagiarized sources.
Get Your Custom Essay on Alibaba Organizational Structure Just from $13,9/Page

Ma eventually managed to attract foreigners to run the company since, during that time, people in China had very little management expertise. This decision, together with the significant Internet penetration in China, resulted in a vast growth of total export volume.

Dual-class stock structures enable companies to keep control even after they become public with their IPO. Companies with this approach (including Facebook, Groupon and Zynga) issue shares to founders enabling them to have multiple votes per share. Alibaba isn’t doing a dual-class structure and the company is actually implementing a rather different concept. The Alibaba governance structure is probably inspired by the Chinese political structure. It is a 27-person partnership where partners have the right to nominate a majority of directors effectively controlling Alibaba’s board, even though they only own a minority stake in the company.

David Webb said “The shareholders are equivalent to the People in China, who have no say in how their country is run” (www.webb-site.com) in his website about government and corporate affairs. The Company justified this organizational design arguing that it wants to create a collegial leadership group that can make long-term decisions. Apparently this is not the only reason the Chinese e-commerce giant had in deciding how to shape its structure, a great deal of relevance was given to corporate culture. As a matter of fact Alibaba relies on this structure as the only solution for preserving the culture shaped by company’s founders.

A substantial part its corporate culture is entrenched in Alibaba’s vision statement, “aiming to build the future infrastructure of commerce and allowing customers to meet, work and live at Alibaba, at least for 102 years” (http://www.alibabagroup.com/en/about/overview). This sense of commitment is well rooted in each employee, starting from Jack Ma himself. He always believed that Alibaba’s corporate culture has been critical to the success of the company. Transparency and critical approach are part of this cultural mindset, strongly contributing to create a flattened hierarchy. Moreover, as a result of this horizontally integrated environment, one of the first things that new Alibaba employees are asked to do is to come up with nicknames for themselves.

To reduce the sense of structure and superiority even those at the top of the pyramid are called by their nicknames. This sense of “family unity” has been shared within one of the biggest corporate events ever: the Alibaba’s mass marriage hosted on May 9, 2014. During the event 102 married couple had to recall the 102 years that Alibaba shall survive, as stated in the company vision statement. “The length of our marriage is 102 years, and we have 87 years left. After 87 years you can marry some else. But within these 87 years, you cannot change your mind” said Jack Ma during his blessing. Alibaba’s corporate perception of unity perfectly aligns with the decision of not reshaping its organizational structure, which allows Chairman Ma and top management to maintain control over Alibaba’s board members.

Undoubtedly, Jack Ma’s philosophy did not change to meet the IPO’s requirements. The company will continue to adhere to its principles, putting customers and employees before shareholders. Almost one year ago, Alibaba’s insistence on its partnership structure contributed to ruin plans for a possible stock market listing in Hong Kong. For this reason Alibaba chose to list in the New York Stock Exchange, where the so-called “Alibaba Partnership” will eventually survive together with its corporate values. The company turned to the U.S. mainly because American regulators allow different types of shares, and other similar strategies to give some shareholders more voting power.

On the other hand, Hong Kong regulators insisted all shareholders receive a voice in corporate decisions equal to the number of share they held, somehow interfering with Alibaba’s partner needs. Choosing to be listed in a foreign country is actually the best example of how corporate values and founders’ interest are worth such a big risk. Apparently, Jack Ma and his partners were right and Alibaba has become World’s largest IPO raising $25 billion, a result without historical precedents ( Related article: http://www.ibtimes.com/what-alibaba-chinas-e-commerce-giant-explained-1690996 ) 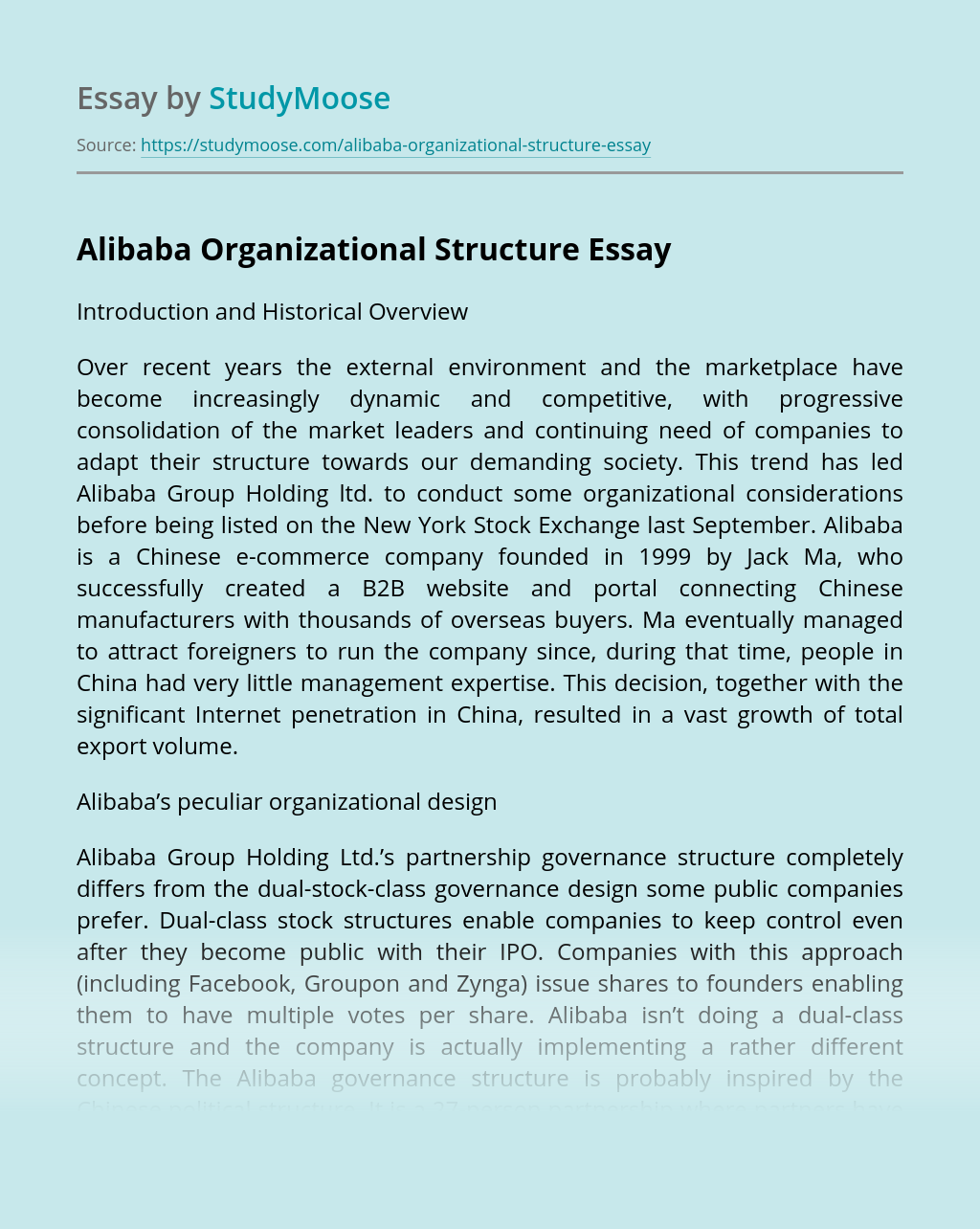