The AICPA term “spousal equivalent” seems to be open to interpretation. Left to my own senses, I found in an internet search the Free Dictionary version of what a “spousal equivalent” is. According to the definition, a spousal equivalent is “a person (not necessarily a spouse) with whom you cohabit and share a long-term sexual relationship”. This definition leaves a lot to be desired and can be interpreted and misled in many directions. Just because one cohabitates with someone else (regardless of sexual preference), doesn’t necessarily mean that they are having sex.

Don't use plagiarized sources.
Get Your Custom Essay on Aicpa – Spousal Equivalent Just from $13,9/Page

As Dr. Higgs mentioned in this week’s lecture, even married couples that live together don’t necessarily have sex. In addition, what is a long-term relationship? In my twenties, a long-term relationship could have been six months. Now that I’m older, I think that the same term should be measured in years. It sounds to me that by using this ambiguous definition, the AICPA is covering all bases when it comes to protecting the ET Section 101 rule of independence.

I doubt that there will ever be a standard accepted definition and as noted by Matthew in his post the AICPA definition is pretty vague. Dictionary. com also has a similar definition to Free Dictionary stating spousal equivalent requires cohabitation and a long-term sexual relationship. If I were a member of PCAOB and I had to define a spousal equivalent I would use similar key words including the cohabitation and relationship, but again, as noted by Matthew there is a need for set parameters regarding specific time frames.

I would agree that a general broad definition such as the one used by the AICPA creates a lot of confusion and obscurity, but as seen by the reading regarding obscenity, definitions are left to the interpretations of the governing parties of the time. I am sure the definition of spousal equivalent will evolve with each Court Justice who is involved in spousal equivalent cases, tailoring the definition to fit each individual cases. 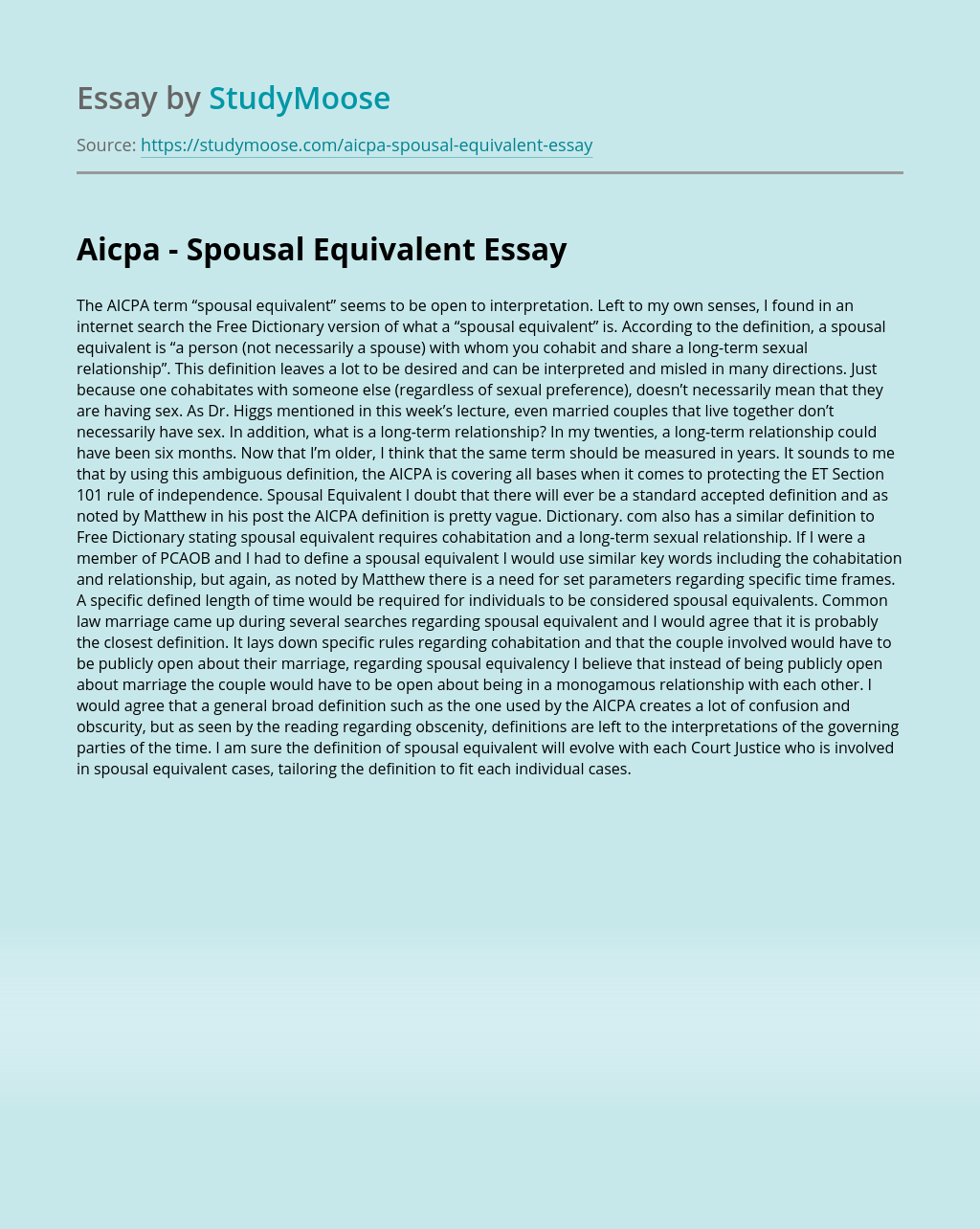 The Positive and Negative effects of the Industrial Revolution

The Positive and Negative effects of the Industrial Revolution The Industrial Revolution had many positive and negative impacts on society. The positive include cheaper clothes, more job opportunities, and improvement in transportation. And the negative would include exploitation of women and children, workers work long hours and environmental damages. These are just a few that...

What it means to be an Associate Member of CIPD The Associate Member applies their specialist skills and knowledge in the context of the organisation’s structure, culture and direction, by: providing support for human resources (HR) leaders and managers as they work to deliver a range of HR processes in one or more professional areas...

Food safety regulations places an obligation on food business operators to ensure that all their activities are carried out in a hygienic way and make it an offence to supply food which is unsafe or harmful to human health, this applies to all premises that provide food whether money is exchanged or not. The food...

Introduction Every day, the internet provides ample space for online petitions, causes and social campaigns. Thus, online social activism is gaining ground. Sociologists wonder whether slacktivism, as it is called, really represents a force or gains so much ground just because it only involves minimal involvement.What is Slacktivism? Slacktivism is a words combination of slacker...