Advertising and the construction of Violent White Masculinity

The article “Advertising and the construction of Violent White Masculinity” points to the controversy of violence and media. It emphasizes that the mainstream debate about media and violence does not emphasis or analyze the most important aspect, namely gender. Katz states that the media illustrates a wrong image of individuals committing crime by calling them ‘youth’ crimes or ‘kids’ love. He believes however that the reason why crime is committed 90% by males is due to the masculinity emphasized in our society.

Don't use plagiarized sources. Get your custom essay on
“ Advertising and the construction of Violent White Masculinity ”
Get custom paper
NEW! smart matching with writer

He also mentions that there is lack of attention on criminals from majority groups such as Whites but an emphasis by crime conducted by minority groups. The article suggests that research has avoided to explicitly specify the relationship between masculinity and violent behavior by white men has been avoided in research.Katz believes to be able to illustrate some ways to display the hegemonic construction of masculinity that is present in mainstream magazine ads and how these ads help to normalize violent male behavior.

Katz suggests that one way violence is normalized is through the movie industry which shows white males engaging in violent actions without being depicted as villains. Moreover, they are regarded as heroes. The boom of the movie industry collided with the instability that was created economically for the White middle-class population. The heroes of the movie industry served as role models enabling the male white population to gain stability with masculine power through size and strength. According to Katz the physical body was the only way to obtain dominance and control for those who did not have economic resources to achieve manhood.

Katz mentions another way our society tries to normalize violence in the white middle class, namely through advertisements. As Katz writes the ads are full of depictions of dangerous looking men. He points out the bidirectional relationship between advertisements and other socially accepted events such as sports and movies.

Advertisements are filled with dangerous looking violent sports men or movie stars and on the other hand the movies or sports events display ads containing the same violent men, enhancing the impact these ads have on the white middle class. The other reason why the media exhibits the violent man is due to the decline of gender differences. Differences between males and females became more rigid. Men needed a way to differ from women, this was possible with becoming more identical with violent behavior. This is where violence becomes justified especially against women as only a means to represent masculinity.Katz examines further the nature of ads regarding violence and masculinity. As he writes there are specific premises that are represented in ads about masculinity and violence.

The first one is the notion that violence is genetically programmed male behavior. This notion is justified by ads showing historical events that were lead by powerful and violent and dangerous men. Some ads also show scenarios that involve violence against other ethnic groups or women. The second premise is concerned with the military and sports that are another source of masculinity. Uniformed soldiers and players are used in different kinds of ads. Using athletes or soldiers for these products, advertising creates the idea that using the advertised products will not decrease masculinity.

The third point is the identification of muscularity with masculinity. Muscles are equated masculinity and power. Physical fitness becomes a major way for white men to keep their masculinity. Finally there is the notion of heroic actions being equal to violent masculinity. Movies play a very important role in illustrating this equation. One other significant point is that movies no only justify violence but also glorify violence.

Advertising and the construction of Violent White Masculinity. (2016, Jun 19). Retrieved from https://studymoose.com/advertising-and-the-construction-of-violent-white-masculinity-essay 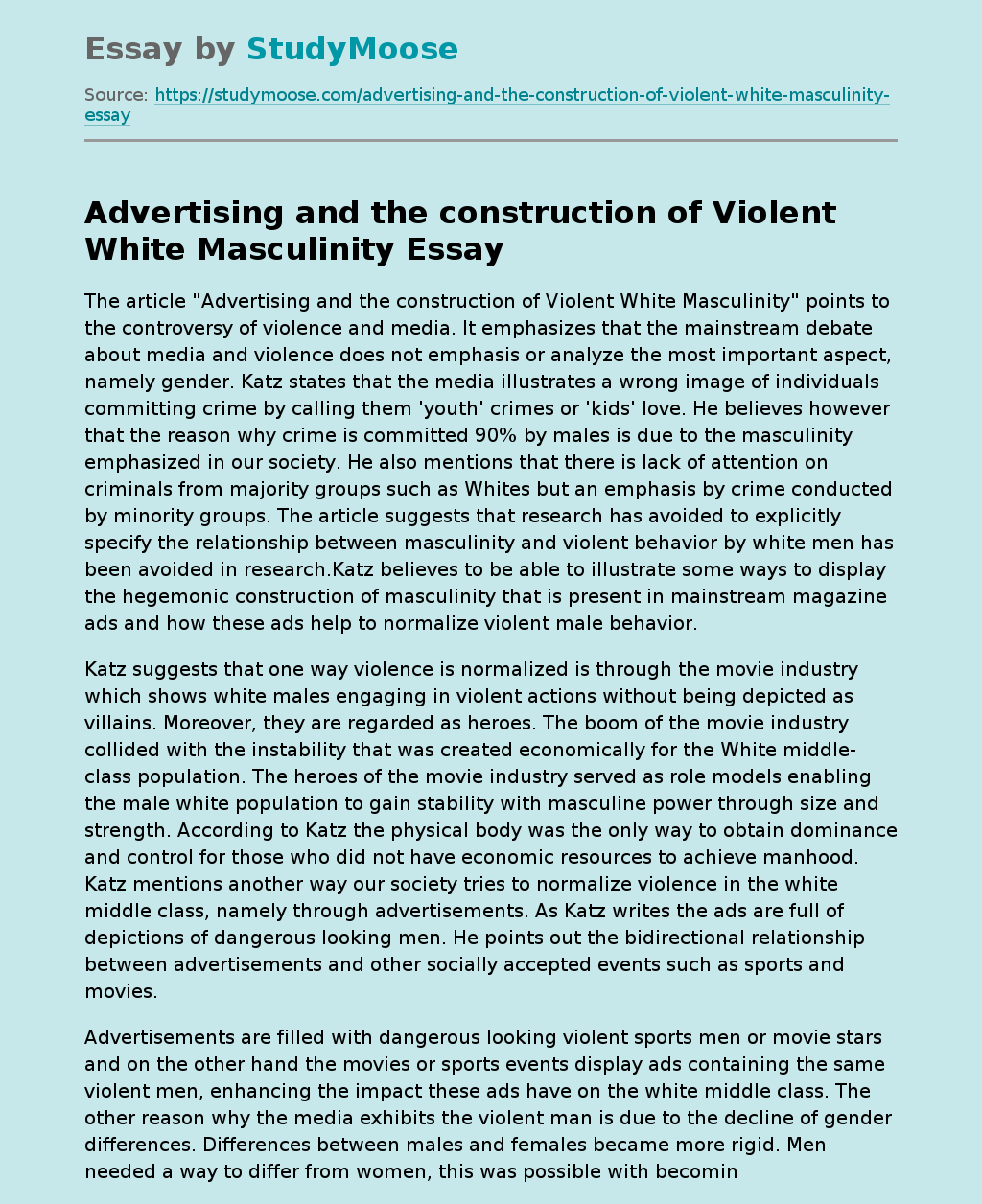