The development in international trade and capital flows that has occurred over the previous two decades has increased the desire to harmonise accounting standards across the globe. The appeal of international accounting harmonization has been extensively discussed. Numerous academics Ali, J M (2005), Adhikari and Tondkar (1992), Saudagaran (1997) argue that adopting International Financial Reporing Standards (IFRS) would bring great benefits to society, such as comparability of statements between countries, progression and development of capital markets and communication and relationships between multinational companies. It has also been debated by some Blake (199O), Nair and Frank (1981), Nobes and Parker (2004 ), Arpan and Radebaugh (1985), Deegan (2005) that with the rewards gained from harmonization come some barriers; economic consequences, nationalism and the lack of professional bodies.

Turn in your highest-quality paper
Get a qualified writer to help you with
“ Advantages and barriers of harmonizing International Financial Reporting Standards throughout the world ”
Get high-quality paper
NEW! AI matching with writer

One of the most valuable features that would come from harmonization would be the comparability of international financial information. Currently there is great misunderstandings about the foreign financial statements, improving comparability would remove this issue and it would also eliminate one of the most significant barriers to the flow of international investment.

Global harmonization would save time and money that is presently being spent on uniting differing financial information when more than one set of reports is required to comply with the different national laws or practice Blake (1990). It will also improve the tendency for accounting standards throughout the world to be raised to the highest possible level and to be consistent with local economic, legal and social conditions. Having one international accounting language is beneficial for the worldwide comparison of statements and understandability.

Unifying accounting standards would also help the development and expansion of capital markets. Ali, J M (2005). In the last two decades the growth in capital markets has been very dramatic. This increase has brought about a number of issues. One concern is the variance in accounting disclosure standards and practices worldwide, which is concerning for a variety of different groups Adhikari and Tondkar (1992). IFRS would allow foreign investors, financial analysts and foreign lenders to have a greater understanding of the financial statements of different international companies and they would be able to compare the investment opportunities which will help them to make the right investment decision. The group that would benefit the most out of the harmonisation of accounting standards would be the Multi-national companies (MNC’s) as the communication of financial information within the groups would become easier. With the harmonization of reporting standards it would be easier for MNC’s to fulfil the disclosure requirement for stock exchanges around the world. Many of the new foreign investment by MNCs is taking place in developing countries and at the same time that there has been a sharp decline in new investments in industrialized nations Saudagaran (1997).

This means that due to the remarkable differences between financial reporting MNCs have to create numerous consolidated financial statements in regards to the regulations for each separate country. To do this it takes a great deal of time and resources, this problem would be eliminated by the adoption of IFRS. A subject of debate is whether the accounting regulators take the issue of economic consequences into account when deciding on whether to adopt the IFRS. Many companies do not take on the change as bringing change into their accounting standards will raise costs. This resistance may occur with the harmonization of accounting standards Blake (1990). Nair and Frank (1981) stated “national accounting group would lobby in this fashion in order to minimize the costs associated with changing to a new standard, or to avoid stigma of noncompliance if it chooses instead to ignore the new international standard”. It is also discussed that accountants may lose their credibility if they are to answer to the economic consequences pressures whilst it is also discussed that it is a vital matter if accounting regulations are to command general support.

Blake (1990) provides evidence of how accounting standard setters were influenced by economic consequence issues in different countries. Economic consequence issues may cause diversity of accounting practices because they are a result of the national cultural and regulatory framework. One of the barriers for harmonization may be nationalism. Nobes and Parker (2004) advocate that nationalism will cause a refusal to accept accounting standards that is to be developed by other countries. Each country follows the belief that they have in place the better system and that other countries accounting standards are of an inferior nature Arpan and Radebaugh (1985). Some countries that have faults and inadequacies within their standards will chose not to adopt the IFRSs as they can benefit from these ineffiecies. An example is given by Carlson (1997) who acknowledges that governments may view attempts by the IASC to alter national accounting rules as infringements upon national sovereignty. Developing nations and those which have been colonies of imperial powers are particularly sensitive to intrusions. Wallace (1990) identifies three reasons in favour of survival of the IASC/IASB, including the increasing internationalization of business and finance, the composite nature of its standards, and the absence of rival in the development of global accounting standards. Another political obstacle that may arise, which is discussed by Nobes and Parker (2004) is that there are several countries that are not in the presence of strong practiced accounting bodies.

The IASB wanted to work through national accountancy bodies but this is an issue as they are not all countries have effective bodies. The IOSCO came forth with the suggestion of the adoption of IASB standards as an acceptable basis for the preparation of financial statements to member exchanges throughout the world. This means that a company looking for listing in another country does not have to adjust its reports to fulfil the specific national requirements if the reports are already in agreement with IASB standards Deegan (2005). The need for the harmonization of IFRS is definitely evident. As discussed earlier there are a great number of benefits that would arise from this progression. To provide a professional, developing and strong accounting environment it would be necessary. Despite the benefits there are a number of barriers and hurdles that need to be overcome in order to bring about the harmonization of international accounting standards. In order to ensure the uniform application of accounting standards across cultural and political boundaries IASB needs to ensure that there are strong audit practices and fair values applied in order to bring about the integrity of the standards.

Advantages and barriers of harmonizing International Financial Reporting Standards throughout the world. (2016, Apr 11). Retrieved from https://studymoose.com/advantages-and-barriers-of-harmonizing-international-financial-reporting-standards-throughout-the-world-essay 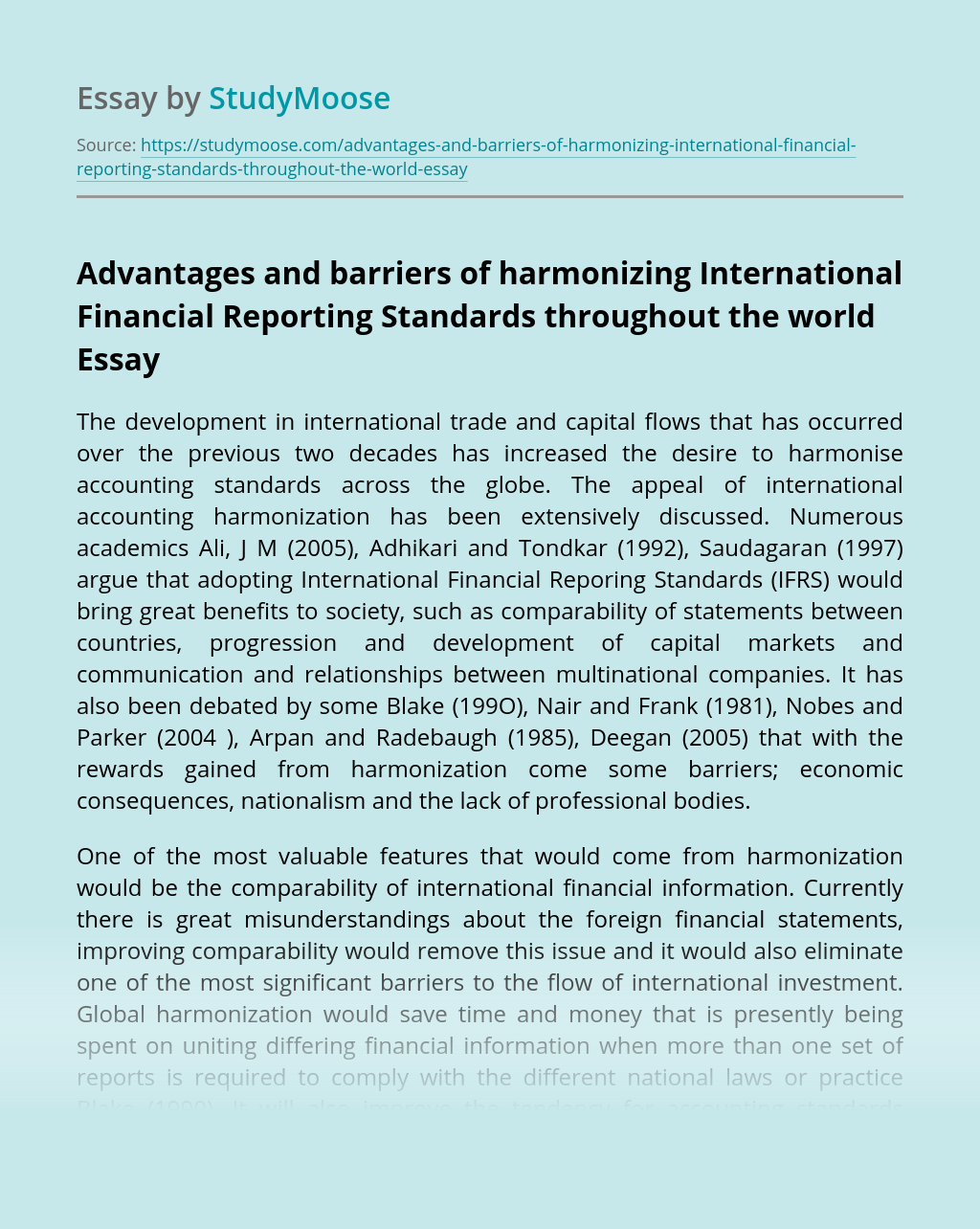 Turn in your highest-quality paper
Get a qualified writer to help you with
“ Advantages and barriers of harmonizing International Financial Reporting Standards throughout the world ”
Get high-quality paper
Helping students since 2015
Stay Safe, Stay Original