The greatest advantage of this system is that it reduces the load on the studentsand Inculcates regular study habits.  Since academic year is divided into 2 semesters it provides upward mobility – the Student can clear the backlog in one or many subjects even after moving to the next semester. Best part is that it enables the students to learn at their own pace.  Well if you compare it to an annual system, it keeps students busy all year round with the same level of burden instead of the piling up of work at the end of the year.

Don't use plagiarized sources. Get your custom essay on
“ Advantage of Semester System ”
Get custom paper
NEW! smart matching with writer

In semester system, Student all time attach with study. Studies which is good for the Students.  The main advantage of semester system. Student busy all the year.

He know, If he Does not study, he will fail. >> Easy learning >> Attach with studies. >> Remain in class>> No absence. >> Grip on knowledge. >> Respect of teachers increases.

>> Scheduled work plan. Disadvantage of Semester SystemAs a disadvantage of the Semester system, I would point out the lack of recovery that students can make due to limited time, in comparison to Annual systems.

Time is too short in Semester system. Students don’t understand many chapters. Today the topic under discussion is the topic which is being frequently discussed by us since the Karnataka University introduced the semester scheme for the degree courses. I strongly believe that semester scheme is extremely beneficial for the students.

It is a sign that we are marching towards the development because almost all the developed countries have adopted the semester scheme which means this system must be having some unique qualities which are favorable for the students.

First of all, the semester based method makes teaching and learning more scientific. It is good for the students as the syllabus is broken up into units that are to be learnt in a specific time frame. Moreover, as testing and evaluation are done in a continuous manner student can be sure of a more realistic assessment of their academic capabilities than what is done in the annual scheme. The actual process of learning is also more methodical in this scheme. Each topic to be covered in the syllabus is allotted a learning time.

The student learns not just by taking down notes during a lecture, but he has to do self study; visiting the library, browsing the net and preparing for seminars and presentations. This results in comprehensive learning of the topic at hand. Many British universities tried changing from the three terms per year system to the American semester system of two sessions per year, in the 1990’s. Some changed but found the system unworkable and returned to the original British system from 2002 onwards.

It seems that there are difficulties with semesters, for British universities, and disadvantages for both universities and students. In Britain, changing over to the semester arrangement of the academic year was coupled with changing to modular degrees. Huddersfield University was the first university in Britain to change to the semester system, but returned to the three-term year in 2003. Glamorgan University also returned from two fifteen-week semesters to the traditional three-term year in 2003.

Modular systems work on a credit system, each module counting for credit towards the student’s final degree. University teaching and learning is very different in Britain, to some other countries. In Britain, students have responsibility for their own learning, and tutors and lecturers do not control or lead students to knowledge but rather suggest where they might look to find that knowledge. British undergraduates do much more self-directed and independent study and reading, than in other countries.

Students are they expected to think things through and come to their own conclusions and then to explain those conclusions, backing their conclusions with logical reasoning based on the facts. Simply regurgitating the facts that you tutor has taught on the course will not earn a British university degree. Lecturers and tutors do not tell students how to learn, or think and university learning in Britain is more than being force fed facts. Hence, in the United Kingdom, a student reads for a degree. The semester and modular system, therefore, caused academics some problems.

Academics felt that the modular/semester system meant that students were sitting too many examinations,simply to complete a module rather than as a necessary part of the learning process. For some subject areas, they also felt that modular learning encouraged compartmentalization of knowledge, rather than applying new knowledge to the subject as a whole, and that it discouraged lateral thinking. In other subject areas, they felt that the modular/semester system only allowed a surface knowledge of a particular topic area, whereas year-long study allowed both in-depth study and the necessary reflection and thinking that the subject requires. 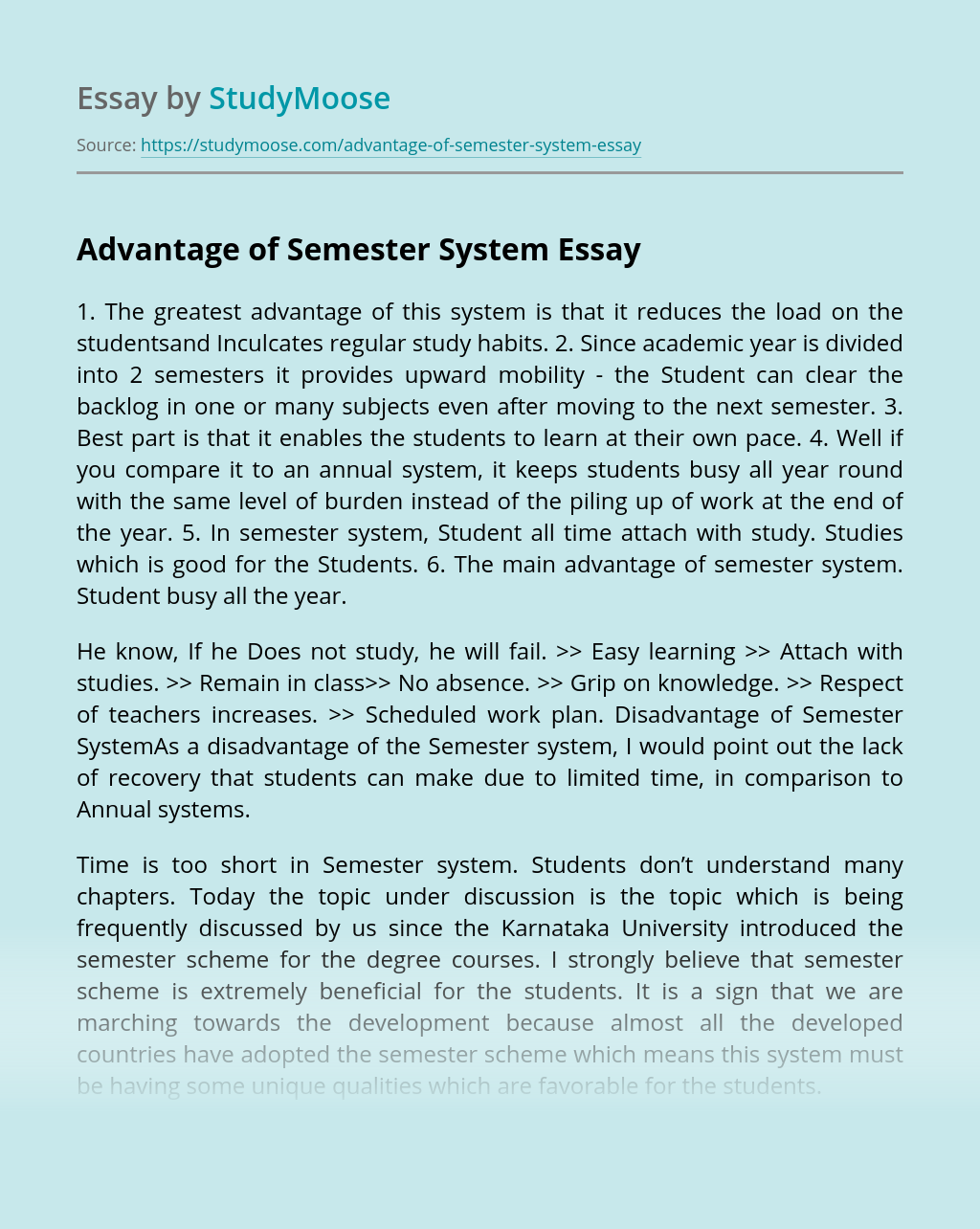