Abraham Lincoln: Sectional President as Preserver of the Union

Before Lincoln became president, there was already much sectional tension between the North and the South, mostly over slavery. While slavery was illegal in most Northern states, it was still the basis of the South’s economy. The main issue was over slavery in the new territories gained through compromises and the Mexican war. At first, the Missouri Compromise temporarily solved the problem, by making it so that in every territory slavery would be illegal, and in return the North would enforce a stricter slave fugitive law.

Don't use plagiarized sources. Get your custom essay on
“ Abraham Lincoln: Sectional President as Preserver of the Union ”
Get custom paper
NEW! smart matching with writer

However, this was overthrown by the Kansas-Nebraska Act, ruining the temporary peace. These acts made it so that slavery in the areas would be decided by popular sovereignty, which meant that the people living there voted on it. The North was outraged and began to fight for abolition. When the South’s candidate John Bell lost to Lincoln, several states seceded, because he threatened their slavery-based economy.

See more: Examples of satire in adventures of huckfinn essay

By the time Buchanan’s term ended and Lincoln took office, there were already seven states that had seceded.

Lincoln’s leadership during the Civil War led to Union victory. First, he ensured that the Border States, the states that were still on the edge, joined the Union by proclaiming that it was not a war to end slavery, but a war to save the Union. If he would not have gained these states, it is very likely that the Confederacy could have won the war. He also proclaimed war in such a way that he would gain support, not lose it.

He sent supplies to Fort Sumter, only to provide for them, not to reinforce them. However, South Carolina troops attacked the fort, allowing Lincoln to declare war on the South and gained support from troops to regain control of military forts.

Lincoln also extended his powers, because of the Supreme Court case which ruled that the president had more power during a time of war. He created the draft, forcing much needed soldiers into drafting. He also used that to declare the Emancipation Proclamation, in which he set all Southern slaves free. This was justified by the fact that the South viewed slaves as property and the government had the right to take away property during times of war. Lincoln’s careful leadership and planning led to victory of the Civil War and preserved the Union. Lincoln’s leadership was also vital after the Civil War. He passed the Homestead Act, which gave settlers land in the West.

This was one of the most important acts in American history, because it boosted the economy as an influx of people moved to the west. This also led to industrialization, as new railroads and factories arose in the west. He also encouraged industrialization through his protective tariff. During the war he placed a higher protective tariff, which boosted the North’s economy. He supported internal improvements, such as the building of railroads and new technology. Lincoln’s Reconstruction plan would have helped the South.

He allowed for easy re-admittance into the Union. All they had to do was receive sworn statements from ten percent of the population, promising to follow new laws against slavery. If he would not have been assassinated, Lincoln would have helped the South a great deal, so his death was actually bad for them. Lincoln was one of the best presidents in American history. His unique qualities of honesty, fairness, and empathy allowed him to lead the country during a time of crisis. His actions during the Civil War saved the Union from completely dividing. He also ensured that slavery was completely abolished through the thirteenth and fourteenth amendments.

Abraham Lincoln: Sectional President as Preserver of the Union. (2016, Dec 31). Retrieved from https://studymoose.com/abraham-lincoln-sectional-president-as-preserver-of-the-union-essay 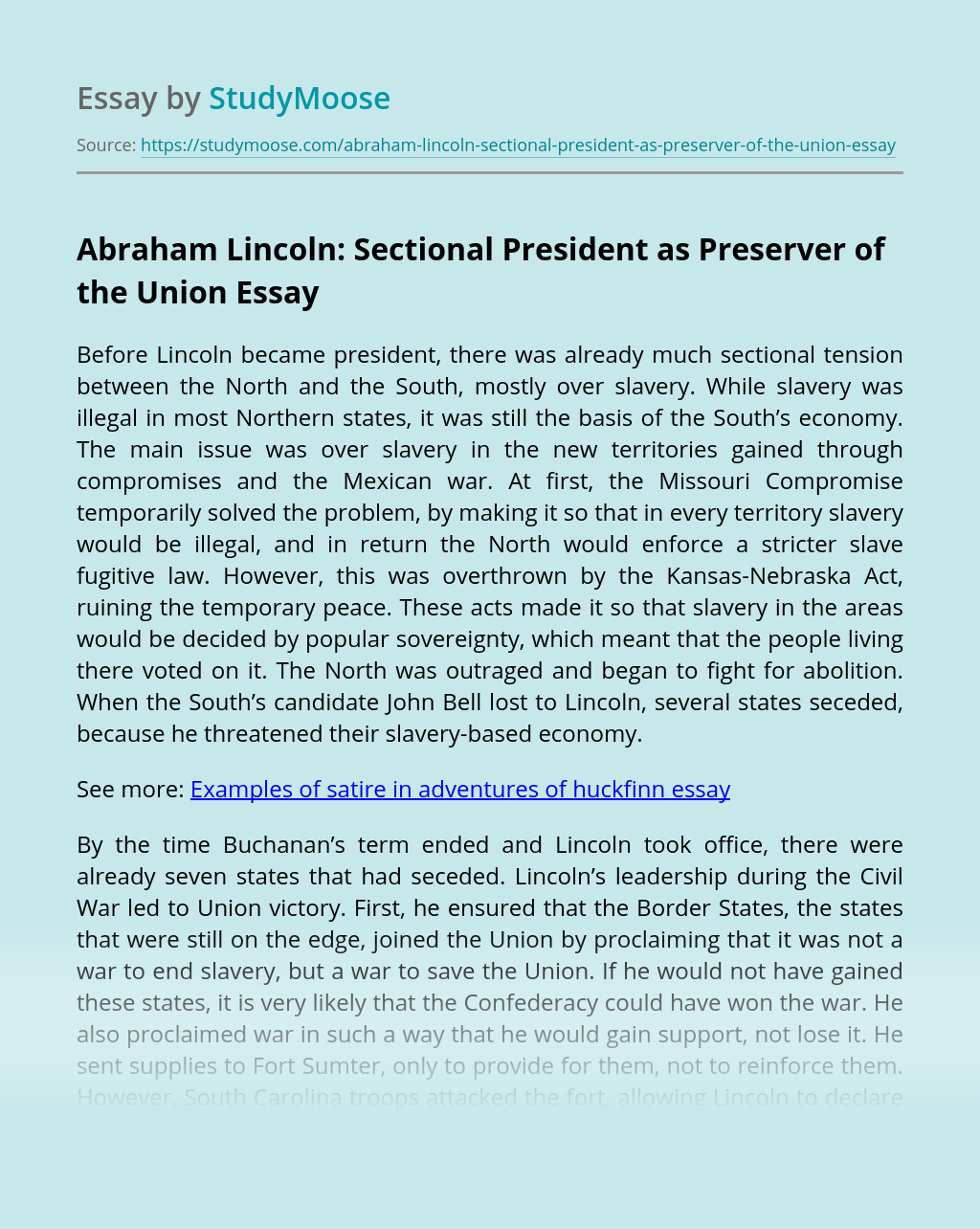