The study of development is that of changes in physical, cognitive, social and emotional capabilities over time. The study is usually carried out on infants and children as their changes are faster and more dramatic than adults. These time based studies reveal that the data collected shows the abilities of subjects and the ages they appear. The data is collected through interviews, observations, tests and desk research of older studies. These interviews, observations and tests are usually carried out one of two ways.

Don't use plagiarized sources. Get your custom essay on
“ Cross-Sectional Approach in Child Development Research ”
Get custom paper
NEW! smart matching with writer

The cross-sectional approach to research entails the study of two or more groups of similar ages. The groups are tested and their capabilities compared to evaluate development (the difference of skills). In the longitudinal approach there is one study group, or one main age group which is studied for a certain amount of time or until they develop appropriately, and their progress is then interpreted and noted.

Cross-sectional studies are preferred for short term studies that may have immediate social effects and need to be proven as soon as possible.

For example the effect of day cares as opposed to parent supervision of the child. The short term nature of the study is because the information can be taken from several study groups at once and there is no need to wait for the members of any group to reach the tested age. Information collected in one session could take years to collect in a longitudinal study.

This brevity also means the studies are relatively cheap to carry out, thus people will more likely fund cheaper studies and so theorists will be more able to test their hypothesises, that is, easier funding means the possibility of carrying out more tests!

From the subject’s point of view most people are less likely to mind a brief or “one-off” interruption in their or their children’s life.

This means that bigger pools of subjects are made available to the theorist and his chosen subjects should accurately reflect the population.

In any study there are externalities that the researcher must take into account that might affect the nature of data collected or the outcome of any test. For cross-sectional approaches this turns into a major disadvantage as each group of subjects has its own individual externalities that may make the groups incomparable. It should be noted that most externalities are provided for by homogenising groups (ethnicity, social class etc) but the effect of others, such as economic stability of the country, may be difficult or impossible to estimate.

Elder (1974, cited in Berk 2000) compared two groups previously studied, one born in the early 20s and one in the late 20s. The first developed a high interest in job security and family life while the second developed an interest in education. The uncontrollable externality was World War II which prompted much of the second group to join the army.

Cross-sectional studies focus on abilities at the instant of the study, and do not describe the appearance of new skills or characteristics or the speed they were achieved. A simple example is that of physical growth in height; a study of one, two, and three year olds will show heights at those stages but would not show if growth was gradual or occurred in spurts.

In the other approach many of these disadvantages are overcome. The longitudinal approach is accepted to be more detailed and explanatory as it follows the course of individuals over time so their development can be noted as it happens and not at certain checkpoints. All spurts and associated abilities can be more accurately defined in this way. This individual study also means that the progress charted is that of actual persons not averages and therefore is viewed as a better reflection of reality.

The preference for this model may also stem from the fact that most psychologists are interested in HOW? and WHY? people develop, not just identifying the times at which or the ways they do. These questions are answered by the spurts and associated abilities that can be defined. Rutter (1987/1988, cited in Sroufe Cooper and Dehart 1996, H. Schaffer 1996) used this method to conclude that a separation from one’s parents before age four has a major negative effect on one’s parenting skills.

All the subjects of longitudinal research are peers and hence they face the same externalities making them easily comparable with each other, fewer differences are attributed to external factors. As subjects are constant, it can be assumed that age is the major factor and so data can be accurately compared with that of the same subjects at earlier ages.

This is also a major disadvantage of longitudinal approaches. The fact that all subjects are susceptible to the same externalities means that they have a unique environment and the characteristics of their development may reflect only that of their peers; this is called the cohort effect. The findings of Elder, Van Nguyen & Caspi (1985 as cited in Berk 2000), state that girls are faced with less favourable conditions during economic struggle than boys, this may not however be applicable today as the adolescents were going through an extreme situation, World War I, at the time.

The longitudinal approach maps individual development and must be carried out as the subject ages, this is usually a number of years possibly even a lifetime. This duration causes much of the disadvantages associated with this study, including:

The benefits of both methods force theorists to choose between them, the choice usually depends on the nature of the study and available finance. There is no absolute reason for using either approach as the weight of the features and faults are situation sensitive. Recently both approaches have been combined for better results. The longitudinal-segmented design for example includes short term longitudinal studies of several closely aged groups until there is some common ground, the results are compared much like those of a cross sectional study. The bonuses and faults of both methods remain eminent but are drastically minimised, mainly lower costs because of shorter durations; and more detailed data because there is regular testing of each group. 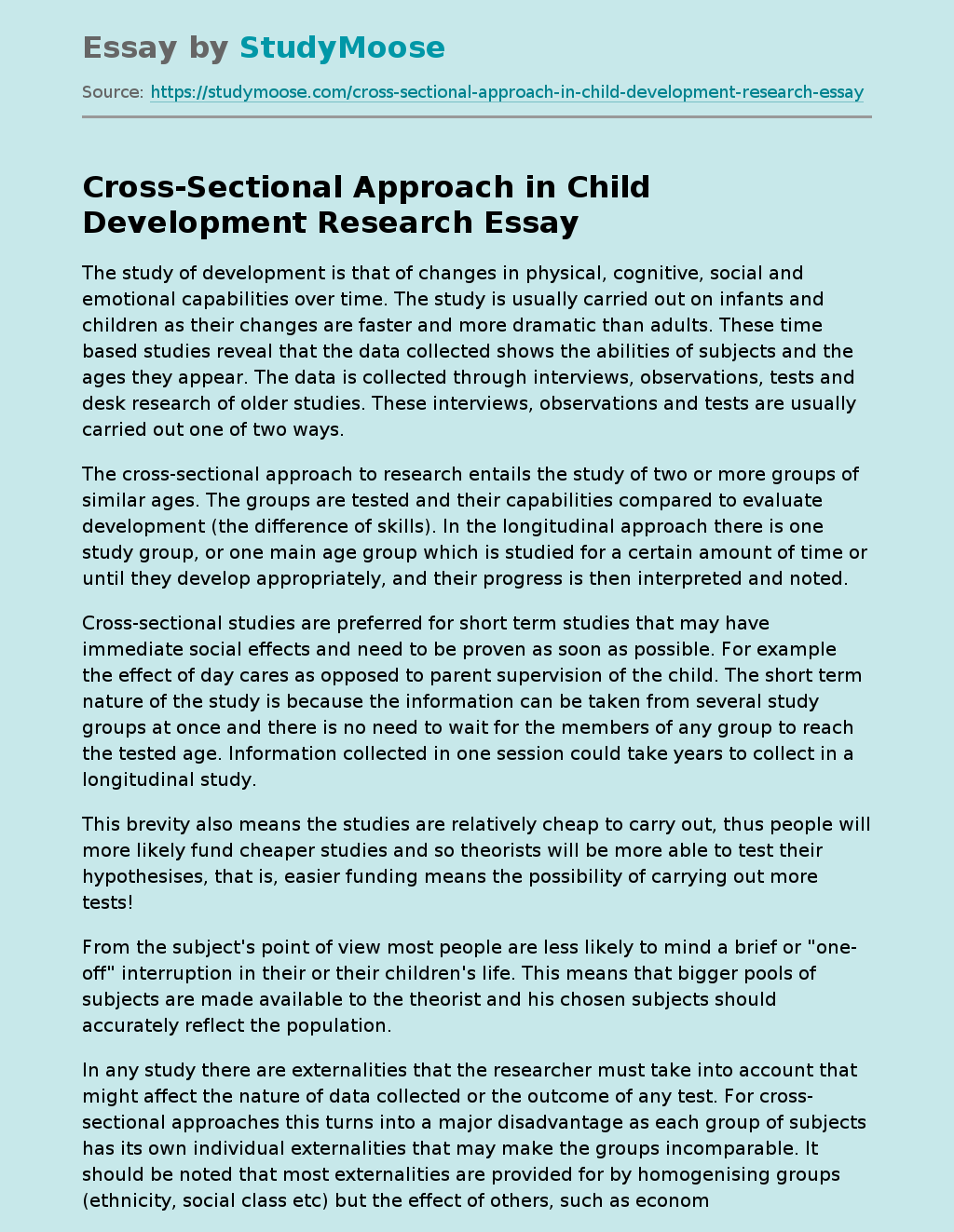